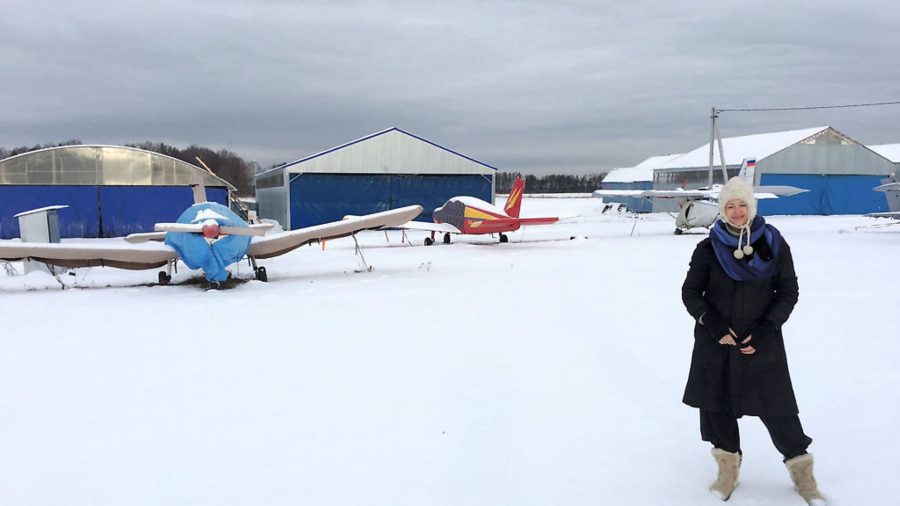 A close encounter with an autogyro in the frozen Russian countryside rekindles a passion for all things aviation | Words & photos: Celeste Goschen

Having been a firm fan of fixed-wing aircraft?from the Steady Eddies to the Fast and Furious?I had always looked at an autogyro as you would a rather risqué date. The sort you’d clamp your eyes on and think, “Mmm, looks like fun but not really the type I’d take home to meet the parents”.

Saying that, nobody could fail to be impressed by its rugged looks in the Bond film You Only Live Twice. Designed in the early sixties by Norfolk hero and the ‘Q’ of autogyros, the late, great Ken Wallis, this bright yellow, flame-throwing, agile model WA-116, nicknamed Little Nellie, rose to fame after shooting down Blofeld’s henchmen in an epic Cold War battle of the sky.

But even with its sexy Sean Connery connections and agile moves, this aerial motorbike still never really attracted me. However, after a recent trip to my partner Sergei’s Moscow birthplace, my mind was changed when the offer of a flight in an autogyro over wild Russian countryside seemed just too good to pass up.

It was ironic that, over the previous two years, all the efforts we had put into building an aviators’ retreat had robbed me of my passion for flying. If I was lucky, maybe this date might be just what I needed.

Friend and driver, Vitaly, picks us up from the city centre in his tiny Peugeot which we cram with luggage for the return trip home. Thanks to the efficiency of an arsenal of snow fighters, a heavy snowfall the night before has not slowed the long snake of traffic heading out of the city.

We are aiming for Shevlino, a private airfield 63km north-west of Moscow, famous for its gliding community and the magnificent Istra Reservoir, a place of unique beauty and crystal-clear waters. An hour into our journey, tower blocks dissolve into the smog and are replaced by nature’s own high-rise regiments of silver birch forests which flicker past the car window like rapidly shuffled cards.

Broad tracks of highway give way to thin, semi-paved roads. The car slows its pace. Snow grinds and crackles under the tyres. The outside temperature has dropped from -12 degrees to a bracing -14.

“Welcome to Moscow’s outback,” Vitaly announces, as we pass twisted road signs pointing skyward. Dense pine forests are cut out against a vast sky, framing onion-domed churches and broken crosses. We drive past long rows of dachas, Russia’s iconic wooden-framed summer houses huddling into one another, their gables draped around pale pastel facias crazed by ice.

Rooftops bow with the weight of the snow. Window shutters are crudely carved into winter animals, corn sheaves and forest scenes. Finally, we reach the village of Shevlino.

Ahead of us trudges a solitary figure dragging a suitcase and clutching a Dave Clark headset. He is followed by a motley crew of street dogs and casts us a hopeful glance as we pass. I point at our luggage squashed against the steamed-up glass.

He shrugs and continues past Café Shashlik, no more than a corrugated shed which releases the perfume of smoky meat stew. The dogs peel away from the traveller and dive into the café’s dumpster, scavenging food. Finally we see a sign for the airfield. Turning in, we are greeted by a guard who acknowledges us with the briefest of nods.

We pass a line of aircraft, half shrouded in canvas, snow up to their bellies. Opening the car door, I am met by a sharp blast of freeze-dried air. Being a fair-weather pilot, I question how the three pairs of trousers I have on suddenly don’t feel enough.

I have never experienced cold quite like this. We walk past a few military-style silver-domed hangars and find Kirill, one of Russia’s leading autogyro pilots, standing outside waiting for us.

Kirill Vechtomov, in his other life, has a psychiatric practice in Moscow. A kind-eyed, swarthy man, the sort of devout pilot whose heart truly belongs to the sky you meet on any airfield throughout the world. He leads us into his two-tiered bunker stuffed full of autogyros.

Everything on display shouts gleaming bodywork, brightly polished metal, from the slick to the experimental. French, German, old, new… In the centre sits an eccentric-looking single-seater prototype homebuilt which had flown for less then five metres before landing “with a bit of a bang”, Kirill explains, laughingly.

Our friend, Vitaly, a self-confessed ‘penguin and earth hugger’ is incredulous at the lack of wings and asks, “But how do they get off the ground?” Kirill explains patiently how the unpowered rotor at the top develops lift as it autorotates, while the engine-powered prop on the back provides thrust. He can see the explanation is doing a slow pass straight over our friend’s head and smiles mischievously, “Technically speaking, it’s magic air.”

We are shown upstairs, followed by the ubiquitous smell of engine oil. There is a cosy windowless bedroom made from chipboard where late arrivals can sleep. A pair of Valenki, traditional Russian felt boots, are neatly stacked next to the bed; a radio, map, and a lighter placed on a small nightstand. Nothing more.

We are treated to a panoramic balcony view. From here you get a real impression of the vast water reserve that curves around the airfield and into the distance. It was built under Stalin’s rule to provide drinking water for Moscow.

In 1935, in extremely harsh conditions, a workforce from two labour camps, known as gulags, were used to construct a nearby canal which would stretch from the Volga to the Moskva rivers. The project was eventually abandoned but my partner later discovers that it was on this very canal that his grandfather, an artist destined to become a set designer for the Bolshoi Theatre, was cruelly sent to labour.

A chilling reminder of the personal history that almost every Russian family carries and which is ingrained into every fold of this vast and incredible country.

I look at some photographs on the wall. There’s a picture of Kirill flying low along a road, holding hands with a motorcyclist. Kirril is something of a legend, hugely respected in Russia’s GA circles and, like all the best pilots, as modest as they come.

He’s taught numerous people to fly over the years which couldn’t have been easy, I say, given so many regulations. “There are restrictions, of course,” he says as we walk back down to the hangar. “It’s easier than it once was.” he adds. ”Far easier.”

Appraising my attire, he shakes his head. “I don’t have a spare suit. Go into your luggage and get every warm piece of clothing out and put it on. You’re going to need it.” I gratefully oblige and return with a spaceman’s swagger, barely able to walk, swaddled in layers of clothing.

He nods approvingly and begins his methodical checks on the machine of choice, a German-designed MT0sport 2010, powered by a Rotax 912 iS. Finally pronounced ready, he drags the gleaming yellow machine out of its hangar, knocks thick clumps of snow off his boots on the side and climbs in. I go to follow him. “No. First I go alone,” he smiles. “Just to make sure nothing’s going to drop off.”

Kirill starts the engine, blowing up a huge cloud of ice and begins to taxi. We march behind his three-wheeled shadowy trail in the snow to the runway?an impressive 800 metres of snow-covered grass. After a couple of run-ups we are joined by the same motley crew of jolly street dogs who seem to be enjoying the show.

Knowing little about the performance of a gyro I was soon to learn that no sooner is it moving along the ground than, in a brisk wind, it’s up and away. We are treated to an elegant, balletic display worthy of the Bolshoi as the craft climbs rapidly skywards.

The propeller makes a beautiful resonant thud as it meets air and for a moment the craft hangs suspended before falling sideways, bowing, sharp turns, crabbing in a perfect horizontal line in front of us before disappearing behind a group of pine trees. We wait for a curtain call but instead are greeted by a sudden silence. Eventually, the engine restarts and the machine appears again before promptly landing.

Not until Kirill climbs out of the aircraft do we learn that this was no controlled engine cut-off but rather that the engine had actually stopped midair?he’d managed to restart it after a couple of attempts. Thanks to the temperature drop, and a massive humidity rise from the water nearby, the choke had completely frozen open and the engine wasn’t performing above 3,000rpm.

Suddenly the chance of flying seemed slim, especially since we had a flight to catch later that afternoon. Our group gathers around the Rotax and a very Russian decision is made: Kirill locates some pliers and cuts the choke cable. “I replace it later,” he adds nonchalantly. With the engine now warm from the previous flight we declare it safe to go.

Donning a balaclava and a British-made Flycom helmet, I haul myself carefully into the snug bucket seat. Plugging in the mic, I await instructions. The safety basics are explained. The pusher prop buzzes into life, the radio fires up in my ear, and as we taxi to the end of the runway I understand, before even taking off, why people love these machines. Kirill turns and gives a thumbs-up.

I lift my swaddled arm as high as I can, the wind catches it and I feel the power of the Russian weather as I am hit by a biting wind. He throttles forward and we’re off.

The finest of white dust spins around us, bumping along the ground for no more than a few seconds before physics propel us upwards. All tension dissolves and we are free. We wave at our audience on the ground; our penguin friend, Sergei, the dogs, now all dots against the snow.

Heading over the broccoli-headed pine trees, the reservoir is spread beneath us. Easing off the throttle, we slow to about 15mph and I am given a moment to wonder at this incredible part of the world. Kirill, however, has other ideas. He’s going to show me what this beauty can do. He cuts the engine, puts the nose forward and we begin a controlled but rapid descent.

As we near the ground he pulls up and we are borne upwards, rushing towards a long stretch of pine forest. Last minute, pulling up sharply and climbing skywards we are leaping over the trees as if riding a horse.

Banking rapidly, we head back towards the airfield. I am swooning at the manoeuvrability of this machine: the liberating feeling of being part of the air around you without the confines of a cockpit, its ability to fly at walking pace without stalling, the comforting fact that it cannot be forced into a spin and needs little runway.

I think of the pioneer of them all, Ken Wallis, who, amongst contributing to many improvements, had been responsible for the offset gimbal rotor head which gives the aircraft such great hands-off stability. It’s then that I remember the reason for building our aviator’s retreat and I thank this extraordinary little machine for restoring my love of flight.

Later, while congregating around a stove in the airfield’s café, enjoying the best Russian dumplings I’ve ever tasted, Kirill reminds me of Bond’s words when first asked about the autogyro: “Oh she’s a wonderful girl. Very small. Quite fast. Can do anything. Just your type.”