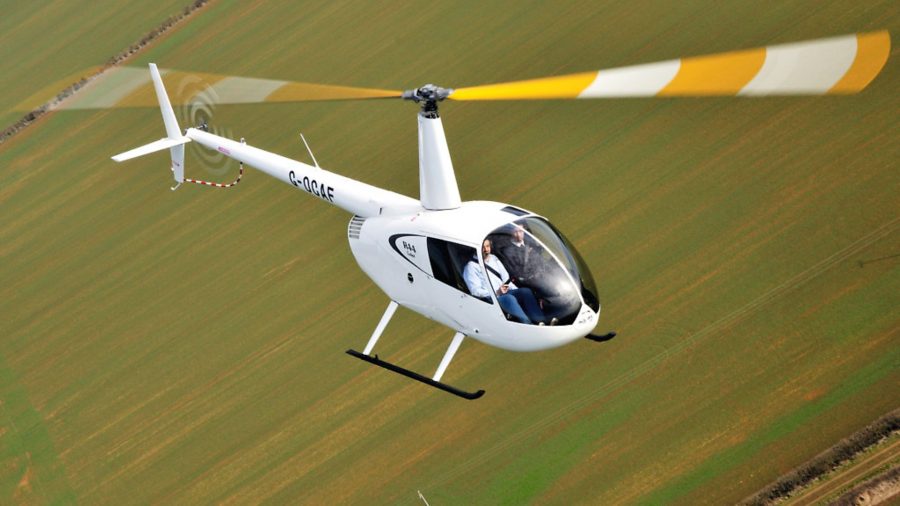 The four-seater with the best safety record in the industry metamorphoses… into a two-seat training machine | Words: Pat Malone – Photos: Keith Wilson

A few years ago now?it was in 2004?I interviewed Frank Robinson in his office in Torrance, California, and as always he was generous with his time, and open and fulsome with his answers.

We spent two hours kicking over his history, philosophy and possible plans for the future, including making his own engine, going for diesel power, and designing the turbine five-seater that was widely rumoured. I was keen to know what he planned for the R22, the little two-seater that had turned the helicopter training industry on its head.

It had already morphed through the HP, the Alpha, the Beta and the Beta II iterations?was there any chance of increasing the max gross weight, which had remained at 1,370 lb while the empty weight had crept up with the addition of things like the auxiliary tank, rotor brake and governor, increasingly impinging on payload?

Frank sucked his teeth and twiddled his pen. “The 22 has grown pretty much beyond its limits,” he said. “It started out at 108hp, now it’s 180 and we’ve still got the same systems, gearbox, drive train. You can’t get that 1,370 pounds up without pretty much starting again from scratch. We’ve backed off on a number of things on the 22.

We no longer make the Mariner or the instrument trainer.

For several reasons, our emphasis has shifted towards the larger helicopter.”

Then he surprised me. “I think in many respects the Raven I would make a really good trainer. It has very good flying characteristics. Flown as a two-place in training, it would have big advantages in performance, autorotational capabilities… with the hydraulics, it handles really well. Look at Cessna?if you want to learn on a new Cessna it’s the 172, right? The four-place. You can’t get the 152 any more.

“The 44 with just two people in it has a really good performance margin. You’d have a reduction in training accidents?fewer per hour flown. It would be a really good training helicopter.”

Fast forward fifteen years and I am at Wellesbourne Mountford, sitting in what is effectively an R44 Raven I with just two seats in it. It is called the R44 Cadet, it’s primarily a trainer, and it is just as Frank described it that day in Torrance.

It seems to have all the advantages he set out?the safety reputation of the R44 (which has a better accident record not only than any other helicopter but better than the GA fixed-wing fleet), the power margins he couldn’t build into the R22, and purchase and operating costs that can only come from America.

It’s got the same 260hp Lycoming O-540-F1B5 engine as the Raven I, but with only two seats the max gross is cut from 2,400 lb to 2,200 lb?more than enough for two really big pilots, full fuel and all their duty-frees. Where the Raven I is de-rated to 205hp max continuous and 225 for five minutes, the Cadet is further de-rated to 185hp continuous and 210 for five minutes.

Robinson says that’s been done to improve hot and high performance?not really an issue at Wellesbourne?but it has also allowed the company to increase the TBO from 2,200 hours to 2,400 hours, which effectively cuts the rebuild cost by an estimated $25 an hour. With standard kit the Cadet costs $357,000, which is $53,000 more than an R22 Beta II and $125,000 less than a Raven II.

So the numbers look good… but hang on, taking a four-seater and making it into a two-seater doesn’t sound too cunning to me. Rear seats are not retrofittable; this is a two-seat helicopter and will so remain. There are two luggage compartments where the seats used to be?you can get fifty pounds in each, and another 100 lb stacked on top of the box lids.

It might make sense in a market where training organisations own their own helicopters, but that’s not common in Britain, where private owners more commonly lease aircraft back to training and self-fly-hire outfits to defray their costs. But Heliair has a very smart leaseback system that makes perfect sense of it?more of that anon. Let’s fly the helicopter.

From all angles the Cadet looks like an R44 because it is an R44, and it flies like an R44, albeit like a new one; G-OCAF had only 21 hours on the Datcon and was beautifully tight and smooth, as well as having that beguiling new helicopter smell… It also has all the modern touches with which the R44 has been upgraded.

Not only has the lockwire been lost from the main rotor pitch links but it’s much easier to get up there to inspect them. With the R44 you really need a stepladder to check the rotor head.

It is possible to put one foot on the door frame at the back and the other foot in the strengthened area by the fuel drains, and haul yourself up using the auxiliary fuel filler cap as a handhold, but I’ve never liked doing that because you tend to leave a dirty footprint on the back seat. Now, with only a flat luggage bin lid to think about, it’s not a problem.

If you’re an R22 pilot, the size of the Cadet’s cabin will make you feel like you’ve got lost in the Gobi desert; it’s 50.5 inches across compared to 44 on the R22. As an R44 pilot, you’d be a mug to jump straight into the Cadet and fly it away because the layout will be new to you and you’d be hunting around for buttons and switches when you might not have time to hunt.

It has a big binnacle with an iPad on top which partly obscures the yawstrings, so you end up checking the balance indicator on the Aspen PFD, which itself is another good reason not to jump straight in and fly off?there’s a lot more to the system than an HSI and a DI, and the manual warrants study.

If you’re used to the Raven II you’d also need to remember the carb heat; the gauge is on the lower portion of the binnacle with the plunger on the deck below. The mags are on the right side of the vertical portion of the panel, with the clutch switch next to them.

Also on that side are the amber brake light and?a new one on me?a full throttle light, also amber. Beats waiting for the low RPM horn. Around the cyclic crossbar there’s a barrel that gives you your max continuous power data, which is markedly better than having the chart stuck up on the roof.

I was flying with Heliair’s Matthew Browne, who took the controls while we formated on another R44 to allow Keith Wilson to take these excellent photographs. Cruising along at seventy knots we were almost at the bottom of the green arc at seventeen inches MAP.

Once the pictures were in the bag we flew off for a little play. Max continuous power for the day was 21.8 inches MAP, which gave us just over 100 knots?very good, I thought, given that neither Matthew nor I are sylphs and we had better than half tanks. In virtually nil wind I pulled the 23.8 inches five-minute rating for a towering takeoff and we made a sustained 600fpm vertically.

A small nose-down pitch took the ASI up to 110 knots, and the flight remained almost as smooth as at 100. Vne is 120 knots. Given that the front seat weight limit (subject to your weight and balance calculation) is 300 pounds a side?that’s more than 21 stone?the advantages over smaller helicopters are obvious. For everything else, think R44?excellent autorotation characteristics, long legs (the main and auxiliary tanks together carry 180 litres) and, with G-OCAF, a beautifully smooth flying platform where the cyclic could be left alone for many seconds at a time without friction.

Sitting down afterwards with Matthew and Sean Brown I asked the obvious question… why would an owner sacrifice two seats, even for the financial advantages the Cadet offers?

Well, there are multiple answers, all of them valid. It’s a dedicated training helicopter, and any owner who’s butted heads with the tax and VAT people (as I have to my cost?even when you win, you lose) will appreciate the advantages of that. Secondly, a lot of people fly either on their own or with one other person; R44s are rarely filled right up. But third and most important is the leaseback system that Heliair operates.

Heliair is part of BEA, the five-base company that incorporates everything from helicopter training to dealing in Pipers, and they have on their books around 170 aircraft of diverse types.

Their Owners Club makes it possible for people to swap time on their aircraft for time on any other owner’s?not just R44 for R44 or helicopter for helicopter, but R44 for Cessna 172 or Diamond Twin Star, R22 or PA-28 for Twin Squirrel or Piper M600. Everything’s worked out on a pro rata basis. They have one R44 owner who’s an opera buff and uses his hours to charter an M600 to take him to Italy for a bit of culture.

Another is using R44 hours to put his son through a commercial fixed-wing course. So if your Cadet is being used in training you have access to another participating owner’s machine, and it’ll have four seats if you need them.

You can go to any Heliair base?if you’re on holiday in Scotland, for instance, you can drop in to Cumbernauld and take an R44 away. Same goes for Wellesbourne, Booker, Gloucester or Thruxton. It’s a very attractive offer, and one that is popular with owners.

Frank Robinson has proved his point, made back in 2004: the Raven I was the basis for the best and safest trainer ever, with the power and the flying characteristics that other trainers lack. And, Sean Brown adds, as modern humans get relentlessly bigger, so the need increases to get away from the smaller two-seaters.

That’s not to say that Robinson plans to discontinue the R22. I asked Frank about that fifteen years ago. He said the helicopter fitted a lot of niches, not just training, and he had no plans to stop making it. The company has passed to a new generation but the R22 remains an important feeder for the bigger helicopters, and its modern iterations also have safety records that are better than GA fixed-wings.

Dr David Smith, whose company Technis produces an annual analysis of Robinson safety in the UK, recently published his results for 2017 which showed that, for the entire Robinson fleet?22, 44 and 66?there were no accidents and no incidents.

Heliair has so far imported four Cadets, two of which have been moved on into Europe. It seems Robinson’s policy of tweaking helicopters for specific niches will hit the spot again.

ERRATUM: Since this flight test was published in Pilot magazine and the original version posted online it has emerged that Sean Brown’s claim that the R44 Cadet is around $100,000 cheaper than the Guibal Cabri G2 was made in error. Sean had mistakenly used the R22 price in his comparison, for which he apologises.