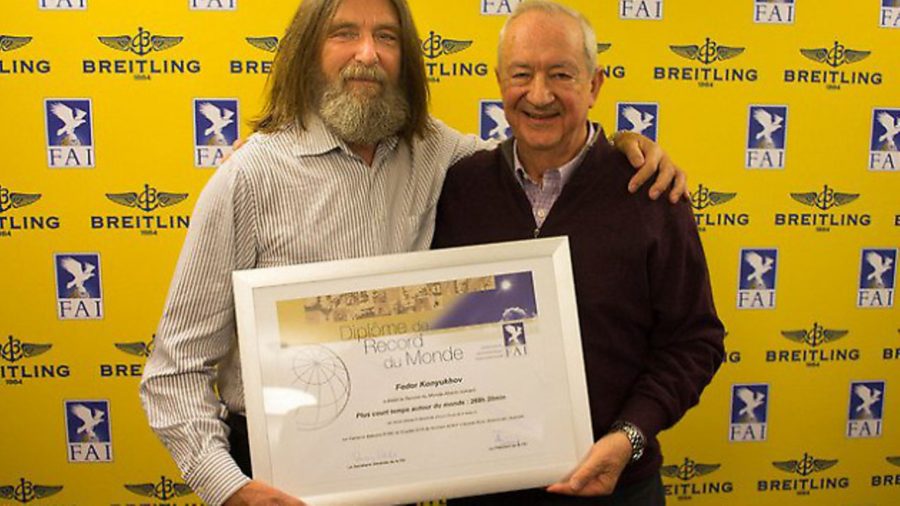 The winner is a Russian Orthodox priest who has climbed Everest twice, rowed across the Atlantic and Pacific, sailed around the world, made it to both Poles and only took up ballooning two years ago

On accepting the award, which recognises outstanding achievement in the world of air sports, at a ceremony in Switzerland, Konyukhov said: ‘I’m really very proud. I thank all the people who helped make this happen.’

The 64-year-old set a new FAI world record by circumnavigating the world in an uninterrupted flight, finishing with a time of 268 hours 20 minutes. He set off in a British-made Cameron R550 Roziere balloon from Northam Airfield in Western Australia on 12 July, and flew solo for a little over eleven days.

During the 33,521.4km flight, Konyukhov endured Antarctic winds, temperatures as low as -50 degrees and thunderstorms. He had to use oxygen tanks most of the time, he hardly slept, other than micro-naps, and suffered bumps and bruises with a heavy landing.

He described the record-breaking flight as ‘an extremely dynamic experience’.

Fellow balloonist Brian Jones, who flew around the world in 1999, presented Konyukhov with an engraved Breitling watch at the ceremony. ‘It takes a special kind of person to make this flight because 75% of your flight is over what mountaineers on Everest would call the ‘Death Zone’. If there’s something wrong with the balloon, you are going to die.’

What makes the achievement even more impressive is that Konyukhov only began ballooning two years ago – making him the first person to fly around the world at their first attempt.

‘I have been imagining it for years,’ said Konyukhov. ‘While sailing around the world I would lie back and look up at the stars and dream about flying past in a balloon.’

When presenting him with the official Diploma of his flight, FAI President Frits Brink said: ‘You are one of the heroes we need, to show our air sports to the whole world.’

Ever thought of going up in a hot air balloon?