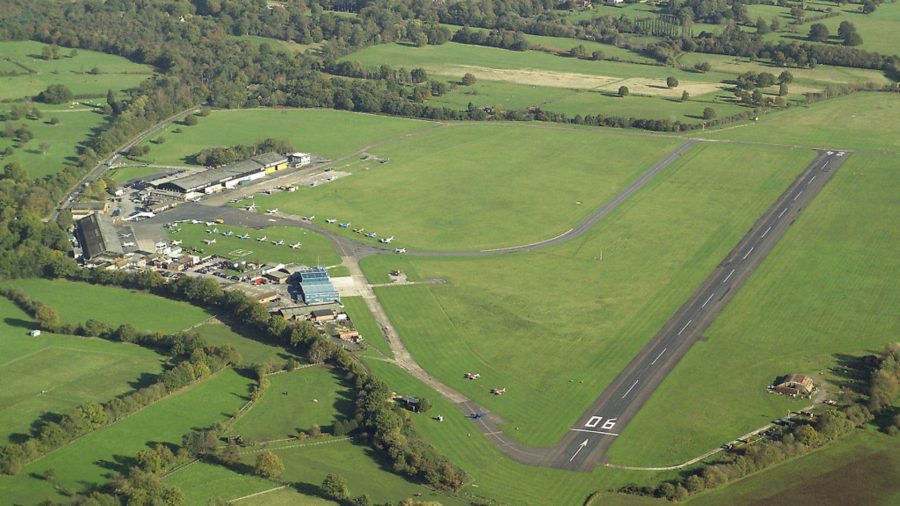 Fairoaks 2020, the volunteer campaign group fighting plans to close Fairoaks Airport to create 1,000 homes on its Green Belt site, has been swift to galvanise support from the All Party Parliamentary Group (APPG) of General Aviation and also from other sectors of the industry

The APPG, led by Grant Shapps, has just added its support against the planning application, formally filed by the Fairoaks Garden Village (FGVL), the current airport owners, in October.

Fairoaks 2020 lodged its own formal objection on 23rd November to Surrey Heath, Woking and Runnymede Borough Councils and has stepped up its campaign, canvassing local residents and releasing a new Keep Fairoaks Flying video.

“We do not believe that such a large development and potential loss of 400 acres of Green Belt landscape – that could result in the closure of this strategically placed airfield to the south west of London – should be made by a local planning committee,” challenged Fairoaks 2020 Chairman Douglas Mancini.

He calls on the UK Government to act on it as a matter of urgency, warning Fairoaks Airport stands poised to become a benchmark for future decisions for general aviation and pilot training in the UK, where some 35-plus aerodromes are under threat.

In its formal objection to the planning application Fairoaks 2020 argues that the application conflicts with official policy – with Surrey Heath’s local plan clearly earmarking Fairoaks for airport use (no mention of housing.)

“The timing is significant,” states Douglas Mancini, coming ahead of the York Aviation Report, due to be presented to the UK Government’s General Aviation Champion Bryon Davis imminently. The independent report, was commissioned by the DfT to look at strategically located airfields in the UK.

York Aviation’s initial report stated that Fairoaks Airport is ‘not viable,’ but Fairoaks 2020 strongly challenges that. It is based on its current (dual) ownership structure, which could be changed, Mancini asserts. Furthermore, its recommendation that operators move to other nearby airports is flawed, he adds.

“The YA Report suggests demand could be met from other London airports, but this is incorrect. There is now only one airport in the London area, London Southend, available for use overnight, without any restrictions. In neighbouring Hampshire, Farnborough Airport (serving primarily VIP jets) is not interested in general aviation. Its fees do not suit the general aviation sector either.

“Redhill is under threat. Blackbushe Airport may not get the permission it seeks for its expansion. Denham Aerodrome, which YA recommends could also take up Fairoaks’ movements, is busy with fixed wing and helicopter GA activity,” he adds.

Amy Paul, General Manager of Denham Aerodrome comments. “Denham does not have the capacity to absorb aircraft displaced from Fairoaks. Nor could it accept businesses that require hangarage.” (Fairoaks’ runway is also longer than Denham’s and only has grass taxiways, meaning it can’t handle as many types as Fairoaks.)

“If someone is assuming that aircraft would relocate from Fairoaks to Denham then they are failing to appreciate the reasons people use aviation. For example, if someone has to drive an extra 45 minutes to get to a different aerodrome many people will not use that option. Instead they will stop flying. We saw this first hand with the closure of Hatfield Airport, and again at Panshanger a few years ago.”

When an aerodrome is closed, a part of the national infrastructure is lost, the network suffers, and the whole UK aviation industry suffers,” she warns.

Fairoaks 2020 challenges that closing strategic aerodromes in the country restricts the number of essential landing sites for cross country navigational flights, so necessary for cadets to gain a pilot’s licence. It is also at odds with the acute future global demand for pilots.

In order to sustain the anticipated 4% growth in air traffic per annum, it is widely forecast the international aviation industry will require over 600,000 new pilots by 2035. Over 100,000 of them are needed in Europe, according to Farnborough-based recruitment firm AeroProfessional.

“Aside from the obvious pilot shortage issue, there is a further risk of airlines targeting much needed instructors to fulfil short term needs, rather than investing in long term training. It is therefore vitally important we fuel the talent pipeline from the early years and invest in the education of young aviation professionals and resources needed to ensure a successful outcome. Aerodromes that give the next generation access to general aviation are thus a critical part of this process,” AeroProfessional Director Sam Sprules concurs.

“Because the airspace is so condensed and busy, airfields like Fairoaks are invaluable for students to train in. They do the hard work here,” adds former Fairoaks flying instructor Graham Davison, now a Boeing 737 First Officer with a large low-cost airline.

One King Air 200 owner based at Fairoaks has a high utilisation rate of organ transplant work, which is time critical, regularly requiring operations into the night and early morning. The twin turboprop can fly in and out of Fairoaks in all weather conditions. This is why this aircraft owner is backing Fairoaks 2020.

“Fairoaks Airport is a critical link in the organ transplant chain. To lose it, with its close proximity to London and the M25 motorway, would mean that organ transplant activities could be impaired, especially considering few other airfields have such capacity and flexibility. Fairoaks is the only airport which offers a hard runway, is available overnight and at weekends. Organ transplants have saved many lives in the recent past, and this would be put at risk by losing Fairoaks,” he asserts.

In its objection Synergy Aviation, the established charter operator and aircraft management company which also runs the Fairoaks’ flying school highlights that the airport is growing. “Business aviation movements (which contribute directly to UK PLC’s investment) continue to increase; businesses and employers continue to thrive and employ skilled and talented individuals in a wide range of highly technical roles. And the next generation are being trained here,” states Synergy Aviation Director Dave Edwards.

WINGX, the leaders in tracking industry trends, is monitoring relatively substantial flight activity out of Fairoaks, with almost 1,700 outbound sectors since 2016, an average of more than 75 IFR-filed flight plans each month. Also, whereas flight activity was down by 7% in 2017 vs 2016, this year’s activity is up by 14%, with a 52% growth year on year in September, a 33% growth in October. “Almost half outbound flights went to non-UK destinations,” according to WINGX Managing Director Richard Koe, with nearly 25% of all flights filed commercially, i.e flown on an AOC.

The most frequently operated aircraft at Fairoaks is the Pilatus PC-12, with 61 different PC-12s active. This year has seen strong growth in PC-12 flights, up 16% compared with 2017, which is good news for Pilatus Aircraft and its exclusive UK sales distributor and Pilatus Service Centre, Oriens Aviation.

Fractional ownership company Jetfly, which regularly has three or four Pilatus PC-12 aircraft in and out of Fairoaks every week, flying its co-owners to Europe for business and leisure, complement several more privately-operated PC-12s and Daher TBM turboprops. “Our co-owners love Fairoaks, its convenience and user friendliness. It is discreet and offers close proximity to Heathrow’s T5. It is fundamental to the Jetfly business model,” concludes Jonathan Clough, UK Director.

In its objection, Fairoaks 2020 challenges that no ‘Very Special Circumstances’ to build on Green Belt land have been demonstrated. Rather, the building of 1,000 homes on an open greenfield site will seriously harm the landscape and biodiversity. Central to residents’ concerns will be the anticipated traffic gridlock, an inevitable result of 2,000 plus more cars, adding to already congested roads.

Plus the years of upheaval, pollution and inconvenience such building work would bring. (To date there has been no consultation with the Highways Agency regarding the impact the additional traffic would have on the neighbouring M25 and M3 motorways, the group note.

At numerous public meetings and subsequent open days ahead of the plan being announced in November 2016, there has been zero support for this housing, says Douglas Mancini, only widening concern from local residents and uncertainty for leaseholders and aerodrome tenants. The proposal by the applicant fails to provide adequate and safe infrastructure or mitigate its significant transport impact, it states.