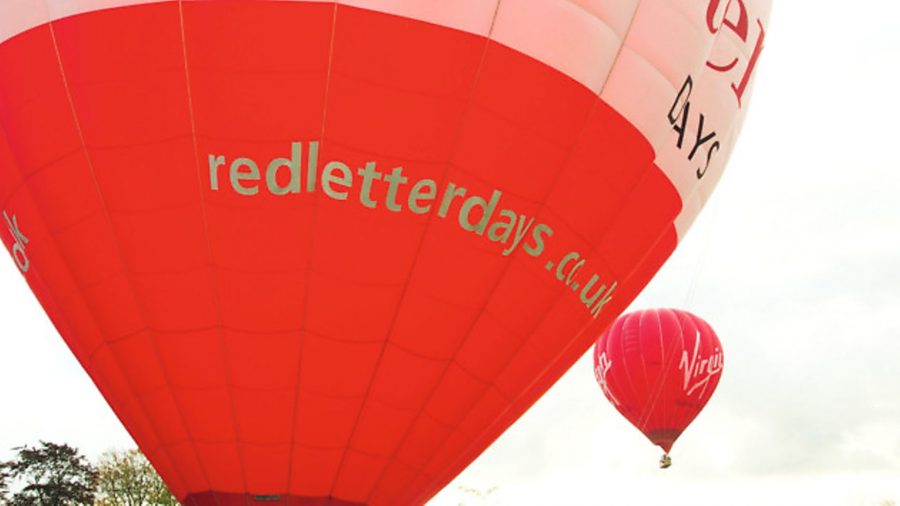 We float serenely over the Somerset countryside, following a set of train tracks and then dipping down over the still waters of a canal. Two people wave enthusiastically from the prow of a green boat and we greet them in return. The whole atmosphere is almost dreamlike. Silent, except for the hiss of gas and the occasional roar of the burner.

Balloons are the earliest form of aviation. 120 years before two bicycle manufacturers made a few hops across the sand at Kitty Hawk, the Montgolfier Brothers took to the air above Paris. This was at a time when some people still believed that dragons roamed the skies, and the thought of commercial aviation was so outlandish that balloons were predicted to be used to help lighten the loads of carriages.

Ballooning is a team activity, and the best way to start out today is to find your regional club and put your name down on the list for crewing. You can find a list of groups on the British Balloon and Airship Club’s (BBAC’s) website, www.bbac.org.

There are two types of licences available for ballooning – Private, or PPL(B), and Commercial, or CPL(B). In contrast to fixed-wing flying, you can actually learn balloon flying from any qualified pilot, just like when learning to drive a car. However, at least four flights must be made with a BBAC-approved instructor in order to get your PPL(B). The requirements also include a flight test, written exams and a minimum of sixteen hours of experience.

The Rotork group fly from the Royal Victoria Park in Bath. As I arrive two commercial flights, with baskets holding around fourteen people, are preparing to fly. A crowd has gathered, children are bouncing about with excitement and the adults are taking snapshots on their mobile phones.

I’m greeted by Mark Dunstan-Sewell, a former technical writer who retrained as a commercial balloon pilot. He’s worked on the Breitling Orbiter 1 project?working out how much oxygen was required for the team?in which a balloon circumnavigated the world for the first time in history. “I have a degree in physics,” he says, “so I’m interested in the science of the thing. There’s good science going on in balloons.”

There are five of us flying today, plus Andrew and James on retrieval. They’ll look at the direction the balloon is flying in and plot a rough line on a map using a compass, before heading off in pursuit. Although a balloon is obvious when inflated, deflated fabric and a basket sat behind a hedgerow are difficult to spot. Their job is less of a chase and more a scavenger hunt. Once they’ve found the craft they’ll go?armed with a bottle of wine?to get permission from the landowner to retrieve it.

“In general we say that if you do four retrieves you can go up,” says Mark.

At the launch site, our Cameron Z105 is taken out of its bag, spread out on the ground in roughly the right shape, and attached to the basket. This is then connected to the retrieval team’s van to prevent it from floating away. A balloon is made up of two types of fabric. Mark says: “Lower down near the flames it’s the same material they use to make racing drivers’ clothes and further up, it’s like the material in your tent.”

Next, Mark uses a cold air inflation fan to open out the fabric and prevent it from being burned. Then the burner is used to warm the cold air and, as the balloon rises, it pulls itself and the basket upright.

Our Cameron Z105 holds three tonnes of air, which needs about 300 megajoules of energy to inflate. The burner gives about three megawatts of heat, so it takes just a couple of minutes to get the balloon upright. Balloons can take off in up to fifteen knots of wind, but have no limitations in flight (the only catch being that the pilot has to ensure that wind speeds are low at the planned landing site).

The woven basket of our balloon holds around five people. Gas canisters stand in each corner and there are rope handles to hang onto. We also take a bag to put the fabric in, just in case the team can’t find us. Getting in is simple?a hole in the wicker side serves as a foothold, then you swing one leg in at a time, just like climbing over a gate.

Once inside, Mark fires the burner and Andrew disconnects us from the van. Then we float gently upwards, waving goodbye to our retrieval team and the crowds of onlookers in the park. The movement is so gentle that if I shut my eyes I’d barely have known I was flying. Once above the trees, Mark points out the iconic Royal Crescent?a series of elegant Georgian houses in front of a green.

Once in the air, there are three methods of controlling the balloon: burners, red ropes and green/black ropes.

There are four burners at the pilot’s disposal. The most powerful is used for inflating prior to takeoff and may be deployed in emergencies. The other three can be used during flight to create more lift. The quietest is useful when drifting over fields containing animals. Just by not using the burner, the balloon cools and descends.

The red ropes, on the other hand, are used to let air out to descend. The plain red cord lets out a lot of air and is normally used in emergency situations on the ground. Red-and-white striped allows a more gentle descent. Finally, the green-and-black ropes enable the pilot to rotate the balloon around its vertical axis, which is especially useful when the basket needs to be aligned for landing.

Unlike an aeroplane with its rows of dials detailing everything from airspeed to the aircraft’s attitude, a single combined instrument, strapped to a strut, provides information on vertical speed and height. It is a variometer and altimeter, as used in gliders. Optionally, the pilot can also use a GPS to give position and ground speed. There’s also a radio, tuned to the gliding frequency, which enables us to stay in touch with the retrieval team whilst in the air. It’s only used as necessary in order to avoid hogging the bandwidth.

It sounds like a cliché, but ‘floating’ really is the best way to describe the feeling of a balloon flight. Today the conditions are perfect; there isn’t so much as a wobble of turbulence and the air is so clear that we can see all the way out to the Welsh mountains.

“After a while, it looks surreal. Like you’re moving over a picture and up here, in the basket, is the only reality,” says Mark. He’s right?I expected the small basket to feel vulnerable all the way up here, but the world below looks unreal, like gazing out of the window of an airliner.

Except that the visibility is incredible. There’s no cockpit wall or instrument panel to get in the way of the view?you can stand and look directly downwards. At one point we see a deer running below us?a regular sight on balloon flights.

“Ballooning is slow enough to admire the world, and you can have conversations with people,” says Mark, “I’ve chatted to people playing on the golf course.” Everywhere we float we see tiny figures waving below. We drift over a main road and wave at the drivers staring up at us from a traffic jam. A few respond in turn?we seem to have lifted their day.

Mark produces an OS map, marked up with red and green ink to indicate areas to avoid landing in and those where landowners are more amenable to having aviators drifting out of the sky to touch down on their grass. An ideal landing site is free of animals and flat, and we all keep a watchful eye out for powerlines.

As we gently lower towards solid ground, Mark reminds us of the drill for landing. Hold on to the rope handles, face away from the direction we’re heading in and bend your knees?“that’s your landing gear”.

As we near the Earth, we brace ourselves. The basket touches down and bounces once, then again and, pulled over by the canopy, begins to tip over backwards, before righting itself. We turn to watch the fabric drift towards the grass. We’re in a field behind a house, in the garden of which a man is stood shooting cans with an air rifle. He turns around and is somewhat surprised to see the arrival of a balloon on his lawn.

He and his wife are fascinated by the balloon. Self-confessed petrolheads, the two of them use our landing site for racing around in their 4x4s. Mark shows them around the craft and offers to take them for a flight by way of a thank you.

He’s enthusiastic about the opportunity to meet new people that ballooning provides, whether they are excited young families or reclusive bachelor farmers. He smiles as he recalls the time he was greeted by a butler wearing the traditional coat and tails. For him, landing out is an opportunity to enthuse other people with his love of flight. If there happen to be young children they’ll let them stand in the basket and help pack the fabric away. How many other forms of aviation are so accessible?

Packing away a balloon is similar to packing away a tent. You fold the edges in to make a thin strip, then roll it up, being careful to remove as much air as possible. Finally, the whole lot is packed into a bag, detached from the basket, and sat on by the team to squeeze out any remaining air bubbles.

The crew, who’ve been peering into hedges to try and spot the hidden fabric, find us and come to our rescue. Once everything has been packed into the trailer, we all pile into the minibus and head back to the park. Mark grins, “Balloonists always return to the scene of the crime”.

Ballooning comes with a great sense of camaraderie – you aren’t a sole pilot, you’re part of a team – and there’s the chance to meet new people with every flight. You’d be hard-pressed to find a more relaxed and friendlier form of flight.

SINGLE USE PILOT MAG ONLY JENNY