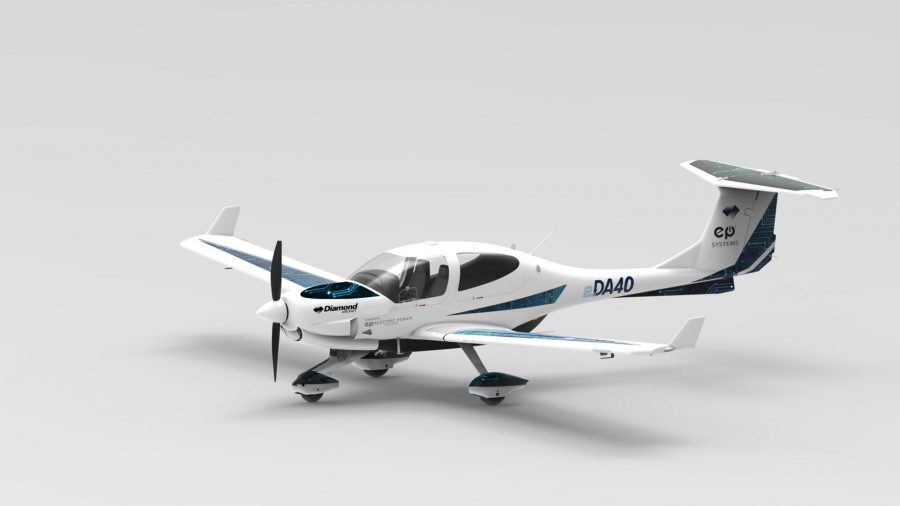 Diamond has disclosed that it is developing an all-electric version of its popular DA40 four-seater.

Specifically aimed at flying schools, the Diamond eDA40 is scheduled for full Part 23 type certification in 2023, its first flight being anticipated in the second quarter of 2022. For the project, Diamond is partnering with American company Electric Power Systems to integrate its EPiC Ecosystem powertrain in the eDA40.

The battery module supplied by Electric Power Systems includes a fast-charging DC system, which is expected to be capable of recharging the aircraft in less than twenty minutes. The batteries will be installed in a custom-designed belly pod, placed between the engine and forward bulkhead. Apart from the electric powertrain and associated batteries, the aircraft is essentially the same as the current DA40, including its Garmin G1000 NXi glass cockpit.

Total endurance is expected to reach ninety minutes as battery technologies evolve (NB the bench-mark certified Velis Electro can fly for one hour – Ed) and the eDA40 is designed to reduce operating costs by up to 40%, compared to piston engine aircraft.

“Making flying as eco-friendly as possible has always been at the core of Diamond Aircraft with our fuel-efficient jet fuel powered aircraft producing less CO2 and noise emissions, compared to conventional piston aircraft engines” said Liqun Zhang, CEO of Diamond Aircraft Austria. “Therefore, we are more than proud to underline this commitment with the all-electric eDA40, a sustainable solution for the General Aviation of tomorrow.”

Underlying the importance of general aviation as a testbed for sustainable aviation Nathan Millecam, CEO of Electric Power Systems, added: “training aircraft set the stage for demonstrating that electric aircraft can meet the demands of high-paced, high-volume operations at a reduced cost basis.”