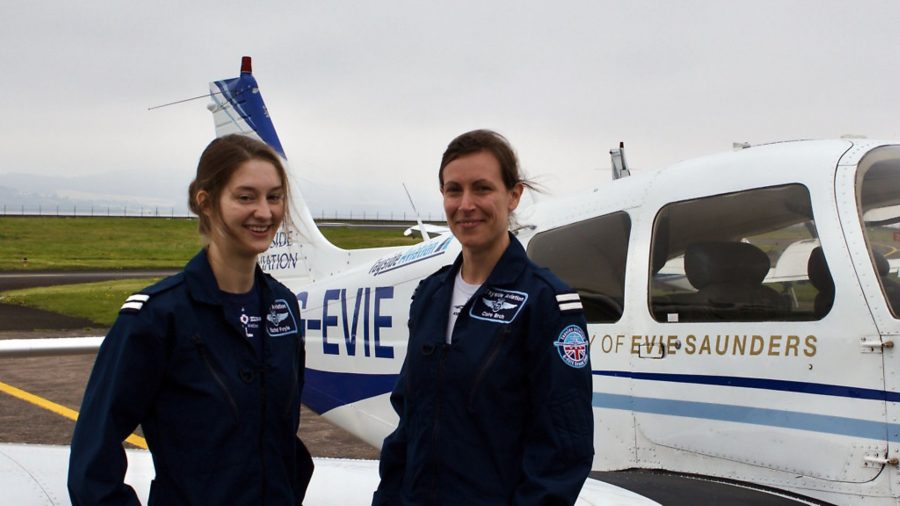 Dundee-based pilots Rachel Foyle and Claire Birch are embarking on a ten-day trip to around UK to promote women in aviation. The flight is being made in memory of the late Evie Saunders who donated to locally-based Tayside Aviation an aircraft in which more than 260 Air Cadet and Air League Educational Trust flying scholarships have been completed. Report from Mike Jerram

Evie gained her PPL in 1989 at the age of 68, went on to obtain night, instrument and multi-engine ratings, and held both UK and US licences. When well over the age of seventy she entered and won a number of flying competitions and in 1992 was presented with the Jean Lennox Bird Trophy for the Most Outstanding British Woman Pilot of the Year.

In 2003 Evie became ill and decided to purchase an aircraft to be used for teaching young people to fly, confiding this only to her niece, Lorraine Richardson. But sadly Evie died before she had a chance to fly Piper Warrior G-EVIE. Lorraine then set out to ensure that Evie’s dream became a reality.

Noting that, at present, only 12% of UK pilots are female, with the worldwide figure even lower at just 6%, Rachel and Claire will fly G-EVIE on ‘Evie’s Grand Tour of Britain’.

“My grandpa gave my brother a trial lesson for his seventeenth birthday, and I had the opportunity to be the back seat passenger. I immediately caught the flying bug, and began my training a few months later. Evie was a truly remarkable woman and we hope that our trip will keep the spirit of Evie in the skies and inspire others to realise their aviation aspirations.”

Claire (35), who began flying at the age of fourteen after getting a gift voucher lesson from her father, is a former RAF navigator who spent ten years in the back seat of a Tornado, including a detachment in the Falkland Islands. She then gained het PPL at Dundee, and has also gained her New Zealand PPL. Now Safety Officer at Tayside, Claire is working towards for her CPL.

Evie’s niece Lorraine says: “It is really exciting and emotional for me to think that these ladies are embarking on this trip and that Evie’s dream is still making such a difference.

“My aunt would have been so thrilled and excited about the tour and full of praise for Rachel, Claire and Tayside Aviation, especially (Tayside’s Managing Director) James Watt for organising it.

“The number of scholarships created by Tayside Aviation and the Air League is fantastic and hopefully many more young women will take advantage of these opportunities and not have to wait until they are 68 to realise their dream. Thank you for keeping Evie’s dream alive.”

James Watt added: “We are absolutely thrilled, as I’m sure Evie would have been, that Rachel and Claire are heading off on this UK trip in her honour. Evie’s fascinating life story perfectly complements Rachel’s and Claire’s determination and passion to attract more women into the industry, and we hope that their story kick-starts some new careers in the months ahead.”