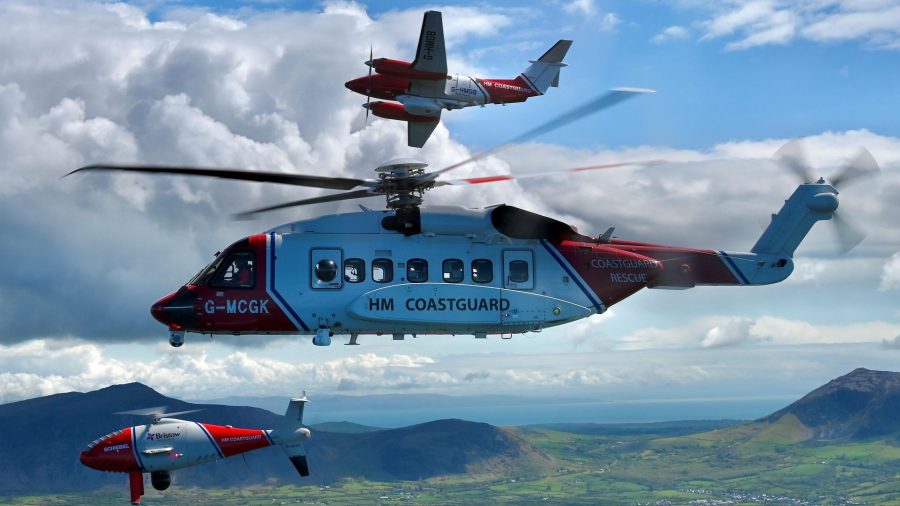 Drones begin operational missions with HM Coastguard for the first time this year, joining manned helicopters, aeroplanes, boats and cliff rescue teams on lifesaving missions at sea and over land in North Wales.

The first unmanned aerial vehicle to be used is a Schiebel S-100 drone, which was trialled a year ago during the first easing of pandemic restrictions. The UAV will fly from the HM Coastguard helicopter base at Caernarfon. The aircraft will also participate in a series of major training exercises with other emergency services teams.

Claire Hughes, the Director of Her Majesty’s Coastguard, said: “Summers on the coast are always busy and we will continue to use technology which could potentially save lives. When every minute saved can prove the difference between life and death, technology like this has a vital role to play in those moments alongside our helicopters, coastguard rescue teams and our partners from the RNLI.”

Commenting on the historical importance of the new aircraft, Neil Ebberson, Director UK Search and Rescue at Bristow, added: “Flying the Schiebel S-100 remotely piloted system alongside our manned aircraft from Caernarfon and the 2Excel surveillance aeroplane was a landmark for the HM Coastguard air search and rescue service.

“While we regularly train with both the 2Excel fixed wing crews and our Caernarfon based S92 crews, this was the first time the three aircraft types had operated [together] in the same airspace. Integrating fully into rescue missions alongside HM Coastguard’s manned aircraft, vessels and vehicles will further prove the capability of the drone and extend the reach of the air rescue service.”

Bristow undertook two years of trials and testing before introducing the Schiebel S-100. The drone is being used as a safety overwatch and monitoring aircraft. Remotely piloted aircraft are expected to ‘play a key role’ when UKSAR2G, the second-generation of search and rescue service, is due to begin operations in 2024.