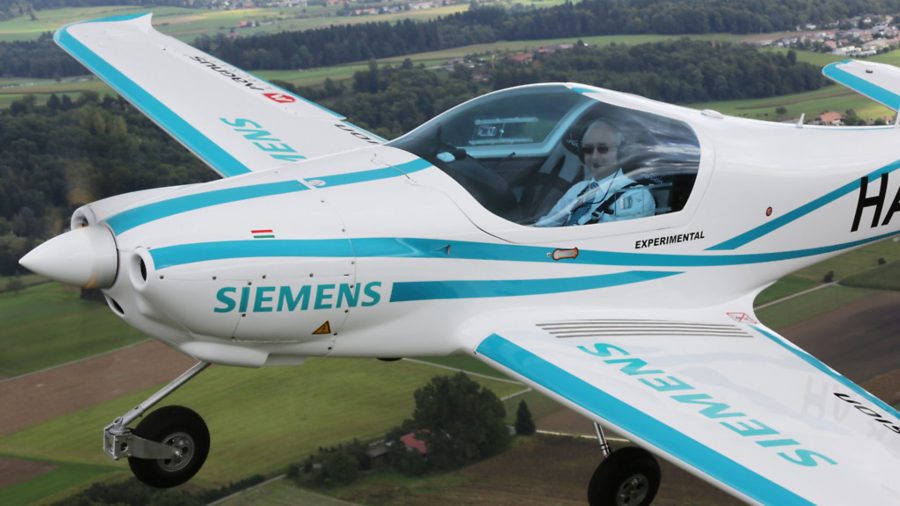 Dr Frank Anton talks about how Siemens, Rolls-Royce and their partners are bringing electric propulsion to GA, in new and perhaps unexpected form | by Philip Whiteman

“The next three decades are going to be all about hybrid propulsion systems.” A bold statement, but who could be better placed to make it than Dr Frank Anton, Executive Vice President of the eAircraft division at Siemens AG, which in June this year was acquired by UK aero engine manufacturer Rolls-Royce.

While we have seen a proliferation of battery-powered designs in the last decade, Dr Anton believes that pure electric propulsion will remain confined to niche areas in aviation, namely:

– Training aircraft, where 45 minutes of circuit flying represents a typical duration and the batteries can be exchanged or recharged between sorties

– Urban air taxis, a number of which are under development at present

– Seaplanes and specialist STOL aircraft, where the electric motor serves primarily as a power boost for takeoff, and

– ‘Sustainers’ for gliders and power plants for motorgliders, where the main means of staying aloft is soaring.

“I have flown the electric Diamond Super Dimona and it is fantastic,” says Dr Anton “but to an engine or motor manufacturer the business model for gliding is not so good”.

Of course the business model for those air taxis is another one that might be challenged?doubts about the safety and viability of pilotless passenger-carrying aircraft have been expressed from a number of quarters, not least Pilot magazine (see ‘Preflight’, August). “This is not my area of expertise,” says Dr Anton.

“I am not predicting that autonomous air taxis will come?just that if they are successfully developed they will be one of the niches for battery power.”

There should be no doubts about the viability of battery-electric training aircraft. Working with Siemens, Slovenian company Pipistrel pioneered the way with the Alpha Electro five years ago.

US company Bye Aerospace has 300 orders for its two-seat eFlyer 2 and four-seat eFlyer 4, and Germany’s Flight Design presented its all-electric F2e concept at Strausberg Airport in June.

A whole skew of companies and groups are producing competing designs “I’d say it’s good to see others involved?but we are two or three years ahead,” observes Frank.

“You want to see others following you?if not, you are walking into the woods alone.”

Evidence of quite how far Siemens?and now of course Rolls-Royce?has got down the line is that an application has been made for EASA CS-23 certification of the SP70D ‘motor’ (correctly termed propulsion system, because the associated electronic control unit is integral to the whole unit) and approval is expected in the next two years.

Meanwhile, for development purposes en route to certification a small number of pre-production units are being built. This is not a simple matter of adapting existing automotive technology.

These designs have to be light in weight yet offer high power density, and be capable of running reliably at high power settings over prolonged periods of time.

It is, however, a mistake to focus on the idea of simply substituting an electric motor for a piston engine as the sole means of propulsion, especially when a combination of combustion engine and electrical machines offers many advantages.

Critically, the energy density of avgas and the jet fuel used in aviation diesel engines is far greater than that of lithium-ion batteries. The only way to get sufficient flight duration/range for cross-country and touring operations, is to ‘top up’ or supplement the electric power with a combustion engine.

Complex systems tend to be more prone to failure, as any engineer will tell you. However, as Dr Anton points out, provided its propeller drive is independent, the hybrid is potentially more reliable?and for this reason it may be possible to use a non-certified piston engine, with obvious cost benefit.

Latterly, in cooperation with companies like Diamond Aircraft, Siemens has been concentrating on ‘distributed propulsion’, another new term that covers the specific kind of series hybrid in which a piston engine-driven generator supplies power to electric motors.

Based on the four-seat DA40, Diamond’s HEMEP proof-of-concept aircraft, which features a diesel generator powering two independent electric drive systems, each consisting of a motor, battery and inverter, was first flown on 21 October last year.

Mounted on a forward canard, the combined electric motors generate 150kW of takeoff power. The diesel generator is located in the nose of the aircraft and can provide up to 110kW.

Sited in the rear passenger compartment, the two 12kWh batteries act as an energy storage buffer. The pilot is able to select either pure electric mode (generator off), ‘cruise mode’ (generator provides all power to the motors), or ‘charge mode’ (generator charges the batteries). On battery power, the aircraft has an endurance of approximately thirty minutes. The hybrid system extends this to five hours.

You might imagine that the combined weight of diesel engine, generator, electric motors, inverters and batteries would make the aircraft a bit of a dud performer?but you would be wrong.

Frank Anton: “It’s all about propulsion integration efficiency?the combination of a big reduction in cowl drag and the free-stream propellers used, which offer a huge increase in efficiency. The gains outweigh the loss to the point that the proof-of-concept aircraft is six knots faster than the standard DA40.”

While we digest this, Frank goes on to explain that the distributed propulsion hybrid is not only faster but quieter, thanks to being able to take off on electric power alone. There’s more to aircraft noise than the sound of the exhaust note?what about propeller noise, I ask?

“We all know that electric motors produce full torque from zero RPM, so here we can reduce noise by running the propellers at low RPM, matching the motor’s characteristics, and the propellers can be designed for more efficient operation at this low speed.” (Flying a Sukhoi Su29 for fun as he does, Frank knows all about efficient, slow-revving propellers.)

“I can tell you that the nineteen-seat aircraft we are now projecting are going to have such a takeoff performance and be so quiet that you will not hear them, standing at the airport boundary.”

Now there is an astonishing claim, and one that might begger belief, did you not know that Dr Anton’s Siemens eAircraft team has already racked up over 300 hours of electric aircraft flight-testing time, fifty hours of which have been logged by Frank himself.

“Only through flying can you learn,” he says “and by piloting the aircraft, I am demonstrating my trust in our technology.”

Sadly, Siemens’ experiments with Permit aircraft have not been made without human cost, the Magnus eFusion prototype being destroyed in an accident that claimed two lives. Frank knew these people and it is with no pleasure that he reports the investigation confirmed it was human error that caused the crash.

It might seem strange that an electric aircraft should catch fire on impact as the eFusion did but, as Dr Anton points out, there is considerable energy contained within a battery pack, and it should be no surprise that intense heat is released when the unit is subject to a severe impact that well exceeds design limits.

In fact Siemens has “never had a hint of a problem” in normal operation of its lithium-ion batteries, which are closely monitored?there is a temperature probe in each cell?and controlled.

The company also has a longstanding involvement in aviation. Pilot readers should know that Siemens made radial engines for aircraft including the Bücker Jungmeister (past Pilot editor-proprietor James Gilbert used to own one of these aircraft) and historians among us will have noted the 1918 Siemens-Shuckert scout, powered by a Siemens Halske ‘counter-rotating’ rotary engine and famed for its exceptional rate of climb (3.7 minutes to 6,500ft, according to my standard reference).

Well aware of this legacy, Frank Anton cites an even earlier Siemens involvement in aviation: the one kilowatt electric motors the company supplied in the 1890s for a dirigible airship.

Now that the baton has been taken up by Rolls-Royce, the most impressive degree of German and British power plant expertise and experience has been combined in one enterprise, giving more weight still to the assertion that ‘the future is electric’.

After speaking to Dr Frank Anton, we would say electric indeed, but hybrid electric and using distributed propulsion!