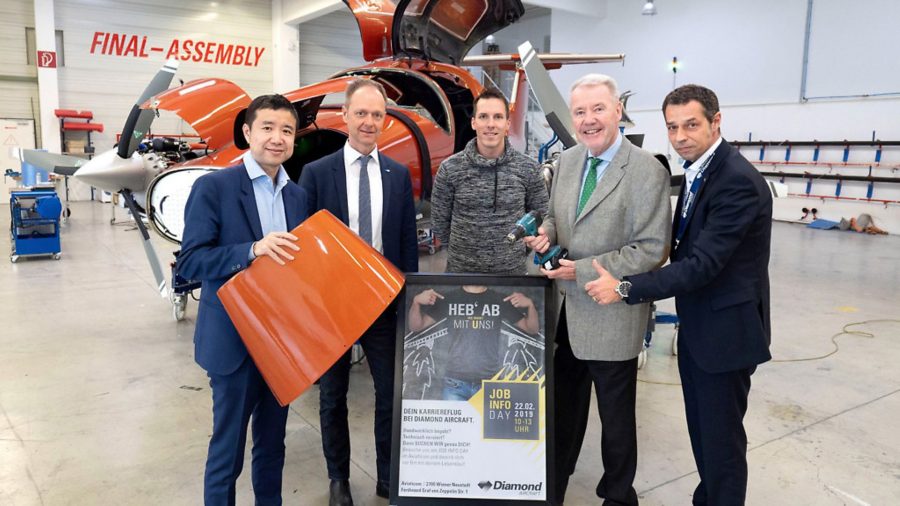 After a huge staff increase in 2018, the company now is looking to employ even more people in 2019 as production is doubling

Liqun Zhang, CEO Diamond Aircraft Austria, said: “We do not see the take-over of Diamond just as an investment opportunity. We are here for the long-term and want to grow Diamond on its existing sites.

“Diamond’s headquarters in Wiener Neustadt have been appointed as the global lead and technology centre and will be strongly developed further over the coming years. We are ramping up production from 90 units to close to almost 200 units per year, more than double the volume.

“In 2018 we have already added more than 100 employees in Austria and we are hiring more people from the local area that are interested in a fascinating position at one of the leading GA manufacturers in its class. We are planning to increase our staff capacity from more than 600 to 800 for 2019 due to high production increase, especially for aircraft manufacturing. We also have lots of job opportunities in Research & Development, Sales and Administration.”

The Canadian branch of Diamond Aircraft, also currently employing over 300, is further growing and still searching for more workers, especially in skilled trades.

Scott McFadzean, CEO Diamond Aircraft Canada, said: “We are doubling our production in 2019 to 150 units as global demand is growing. After adding more than 100 workers in the past year, we are hiring another 100 people in all departments in 2019 to meet global demand.”