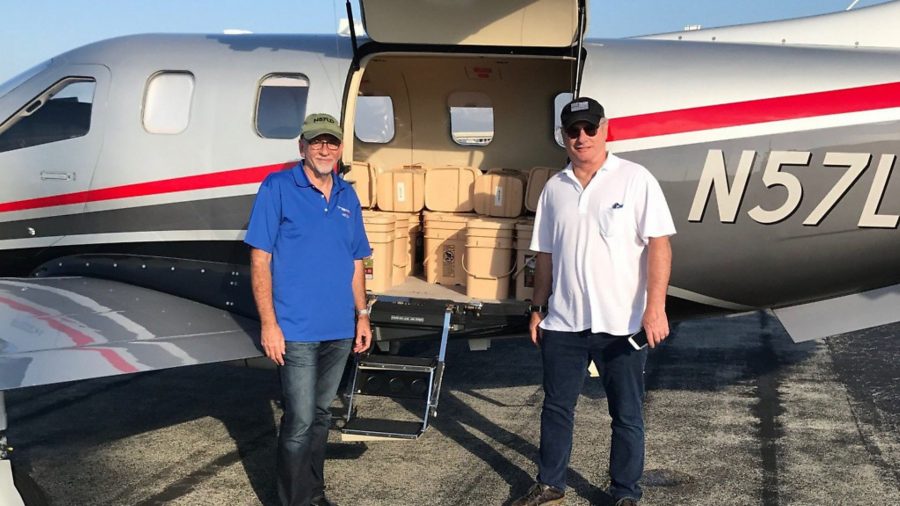 Daher have recognized the TBM Owners and Pilots Association’s (TBMOPA) airlift of vital supplies to the Virgin Islands, Puerto Rico, and Houston following the devastation caused by recent hurricanes

Nine TBMOPA members brought their TBM aircraft to various locations in Florida for the pickup of relief supplies that ranged from food, water and chainsaws to generators, diapers and baby formula.

The aircraft then flew to the Virgin Islands and Puerto Rico with average loads of critical supplies exceeding 1,000 lb. per trip. “I will never forget being greeted by both hugs and tears at Beef Island in Tortola after touching down on the first of my two delivery flights,” explained TBM owner Dierk Reuter, who coordinated the operation for TBMOPA.

He added that a fully-loaded TBM can carry “an incredible amount” of material. “I was surprised that some larger-looking airplanes can’t actually take that much more in weight than a TBM, with the other aircraft appearing to be much more sensitive to weight and balance issues.”

TBM owner John Ratliff, who also is a director of the Virgin Unite charity, said the private relief efforts with TBM aircraft were critical in providing such items as insulin and dialysis supplies to the right people at the right time.

“Relief supplies and medical personnel were flown in – and evacuees were flown out – of Puerto Rico and the British Virgin Islands, with all nine TBMs serving as 100- percent reliable and flexible airlift platforms,” Ratliff explained.

“Quick seat adjustments on the TBM enabled the switch from cargo to evacuation configurations in just minutes, which was really important to us because we were racing against sunset and flight curfews.”

The “TBM Bridge” that airlifted supplies to the Virgin Islands and Puerto Rico helped ease the suffering of people in these areas, as have the efforts of owners of other general aviation aircraft, Radcliff said, noting there still is much to be done.

He encourages owners with suitable general aviation aircraft to join the outreach, adding there is no lack of relief supplies – while a significant shortage of capable aircraft and pilots to transport the material does exist.

Tom Gessler, another TBM owner, was impressed by the TBM group’s instantaneous impulse to do whatever was necessary to help. “We came together based on a personal and unselfish need to help fellow humans in despair,” Gessler stated.

“We all pooled our resources to deal with each obstacle that came our way.”

TBM owner Dr. David Pulver conducted an individual initiative – joined by another South Florida TBM owner, Arthur Steier, who served as copilot. Their mission was to bring supplies to San Juan, Puerto Rico, where the material would be unloaded for locally-based aircraft and ferry pilots.

“The airspace control infrastructure had suffered and traffic was intense, with an abundance of airplanes helping out in one way or the other,” Pulver explained.

“The plan to unload and quickly fly home unraveled as we discovered there were no other airplanes available. Not only would we need to continue on, ultimately heading to the British Virgin Islands with what we had brought from Florida, we were advised there were more supplies to load.”

Nicolas Chabbert, Senior Vice President of the Daher Airplane Business Unit, commended the TBM pilots’ efforts: “We sincerely appreciate the dedication and reactivity of TBM owners who did not hesitate in donating their time and aircraft to support people in this time of distress.”

“They have all done an outstanding job,” Chabbert said. “We are very proud to be associated with such fine people.” He added that the Daher parent company’s board has decided to recognize the pilots’ efforts by offering a fuel voucher to each of them.