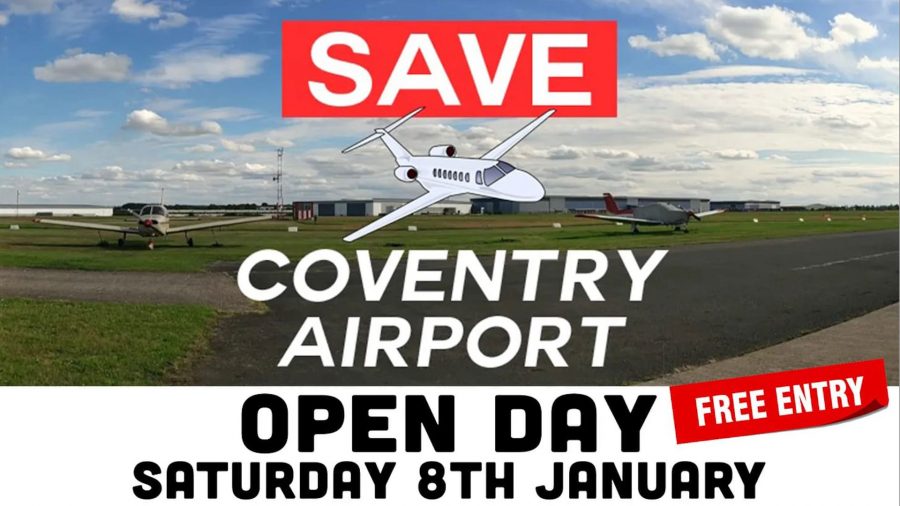 Aviation group Ã¢â‚¬ËœSave Coventry AirportÃ¢â‚¬â„¢ is organising an open day and fly-in to raise awareness about the airfield, which may be closed to make space for a factory

The Ã¢â‚¬ËœSave Coventry AirportÃ¢â‚¬â„¢ action group has organised an open day and fly-in at the airport for this coming Saturday 8 January, ahead of a council meeting on 11 January 2022 which will decide the future of the airfield. At the moment it is confirmed that the free-entry event will feature a static display of the iconic Vampire jet and a special offer from Flight Simulators Midland to fly their 747 simulator, in addition to a number of aircraft which are expected to attend to show support for the airport.

The council meeting of 11 January will discuss the planning application submitted by The Rigby Group, which wants to build on the airfield a gigafactory for the production of electric batteries, a plan that would imply the end of aviation activities.

Several public bodies have objected to the gigafactory plan, including Baginton Parish Council, which says that it Ã¢â‚¬Ëœwould breach [the General Aviation and National Policy] guidelines and destroy a nationally important piece of infrastructureÃ¢â‚¬â„¢. The UK Civil Aviation Authority has also expressed strong opposition to the planning application, saying that Ã¢â‚¬Ëœit would undermine the Department for TransportÃ¢â‚¬â„¢s objectives of promoting and boosting the viability of UK General aviationÃ¢â‚¬â„¢.

Aircraft visiting for the 8 January event are required to register at www.egbe-flights.com. The fly-in and open day, which may include additional events (yet to be confirmed), will start at 10AM.