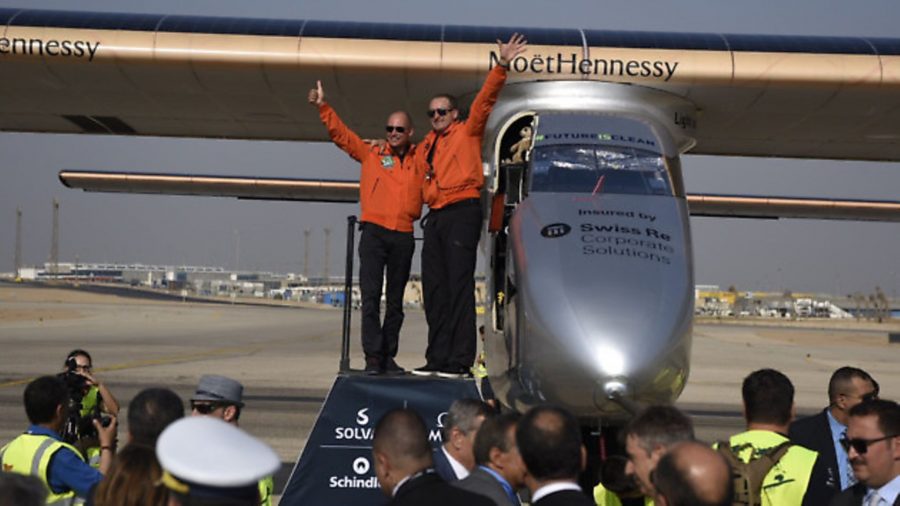 On its journey around the world, Solar Impulse 2 (Si2) – the solar airplane of Swiss pioneers Bertrand Piccard and André Borschberg – landed in Egypt after a flight of two days and two nights (48 hours and 50 minutes) without fuel.

The flight, which crossed the Mediterranean Sea from west to east and covered a total distance of 3,745km (2’327 miles) flying only on solar power, was the second to last leg of the attempt to achieve the first ever Round-The-World Solar Flight, the goal of which is to demonstrate how modern clean technologies can achieve the impossible.

At the controls of Si2, André Borschberg touched down at the Cairo International Airport, at 07:10 local time, after an iconic moment flying over the pyramids of Egypt completing a flight of two days and days nights – at a maximum altitude of 8’534 m (28’000 feet) and average speed of 76.70 km/h (47.66 mph) – that took off from Seville on 11 July at 6:20 am local time. This flight, connecting Europe to North Africa by crossing the Mediterranean without a drop of fuel, marks the penultimate leg of the first Round-The-World Solar Flight as well as the last flight of André Borschberg in the context of this pioneering adventure, before Bertrand Piccard will take the controls for the last leg to Abu Dhabi.

“This was an emotional and meaningful leg for me, being able to enjoy once more the incredible sensation of flying day and night thanks only to the energy of the sun and enjoying fully the present moment. But it also brought back many memories about the project: from the moment I heard about Bertrand’s incredible vision of an airplane with perpetual endurance, to the creativity, motivation and spirit demonstrated by the entire team and partners throughout this adventure,” said André Borschberg, Co-Founder and CEO, who flew the solar powered aircraft to Egypt.

“This landing in Cairo brings Solar Impulse back to the origin of my dream. Egypt is the country where I landed after my non-stop round the world balloon flight in 1999, and it’s precisely here that I had the idea of an airplane flying around the world on solar power. André and his team of engineers helped to translate my vision into reality, and I congratulate them for having built such a revolutionary airplane,” shared Bertrand Piccard, Initiator, Chairman and also Pilot of Si2.

Now in Cairo, Si2 and the Solar Impulse team are perfectly positioned to attempt the final leg of the Round-The-World Solar Flight, when the weather is right, and reach Abu Dhabi in the United Arab Emirates where their journey began in March 2015. By flying around the world with no fuel, Bertrand Piccard and André Borschberg are demonstrating that modern day exploration and pioneering are no longer about conquering new territories, but about exploring new and alternative ways to have and sustain a better quality of life on Earth. Solar Impulse’s clean technologies can already be used not only in the air, but also on the ground, and have the potential to change individual habits, societies and markets in an unprecedented way.