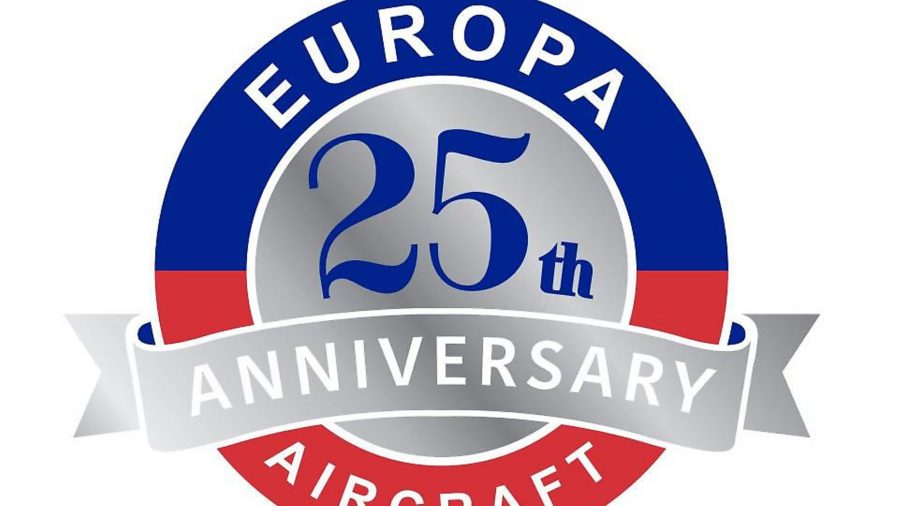 Europa Aircraft is celebrating its silver jubilee, 25 years after the flight of the first production aircraft and the company has launched a range of 25 Anniversary limited edition merchandise to mark the occasion

Europa Aircraft is one of the only light aircraft manufacturers in the UK today selling kits, parts, accessories and modifications to customers around the world, together with providing technical support for its current fleet.

Boasting over a thousand kit plane sales worldwide with hundreds of completed aircraft flying in six continents, it’s no surprise that Europa Aircraft is cited as the UKs most successful kit plane company, and one of the most acclaimed kit plane companies in the world.

There have been many highs and lows over the last 25 years, but Europa’s story is a great one, with an amazing heritage and a positive future.

Born From a Dream

The story of Europa Aircraft began in the 1990s; born from a dream to build a small aeroplane capable of quiet, comfortable, high speed, low cost touring. The basic concept was to produce an aircraft that made real flying affordable and possible.

The original model, the Europa Classic, achieved all of its objectives. It was easily capable of being rigged and de-rigged by a crew of two, road transportable for home storage on a purpose-built trailer, able to use short, unprepared grass runways with STOL performance, economical to operate, fast, cost effective, simple to construct, and easy to maintain and environmentally friendly.

The Europa Classic sold in hundreds, making a firm impression on the kit plane industry, and in 1993, the first Europa built by a home constructor was airborne.

The Europa Classic was by now a strong contender in the self-build arena, however it was the launch of the Europa XS that gained the company massive acclaim worldwide. The Europa XS was available in two versions – the Europa XS Monowheel and the Europa XS Trigear. It had pre-formed hollow wings, more streamlined cowling, extended tailwheel, enlarged baggage bay and a better-balanced spinner.

It was also designed to reduce the build time and maximise the pleasure of the build process – developments that were welcomed by builders and pilots.

The Europa XS was named one of the UK’s Millennium Products. These products were chosen following a nationwide initiative run by the Design Council to identify and promote products and services demonstrating British business innovation.

The Europa gained fame in the 15-part TV series, A Plane is Born, presented by Mark Evans and also made an appearance on the popular Children’s TV show, Blue Peter gaining itself a prized Blue Peter badge in the process!

Soon after, Europa launched the Europa Motor Glider for those pilots who like to fly with their engines switched off – most impressively, the glider wings can be interchanged with the wings on the Europa XS Monowheel and Trigear, providing even more choice for the Europa customer.

Unfortunately, by 2004, it looked like the dream was over – changes in ownership and management together with changes in the industry, had caused turmoil within the company and it was on the brink of closure.

However, in 2008 Swift Technology Group, a company dedicated to the revival of the UKs aviation industry saved the day and acquired the company and its manufacturing arm, AMEL.

Europa Aircraft HQ is now based at Wombleton Airfield, with AMEL based at Scottow Enterprise Park (formerly RAF Coltishall) – both of these locations have undergone renovation and refurbishment as part of the Group’s dedication to restore aviation heritage in the UK.

Europa will be making some exciting announcements in the next few months, so let the celebrations commence!

Follow the shop link below to check out the anniversary merchandise.