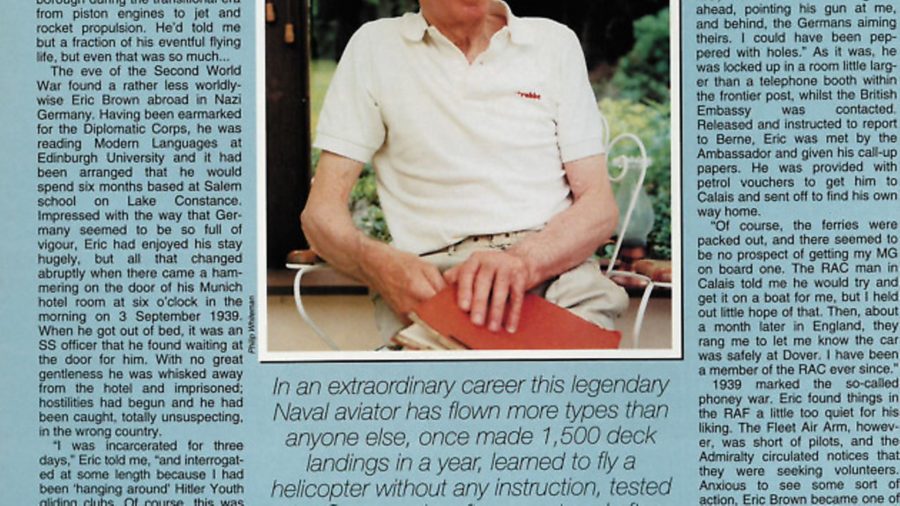 A legendary figure– he piloted more aircraft types, from piston-engined singles to jets and helicopters, and made more carrier landings than anyone in history – Capt Eric ‘Winkle’ Brown died at the age of 97 on Sunday 21 February.

The author of many aviation titles and a popular speaker, active right up the last months of his long life, Winkle Brown was widely known and admired beyond the confines of the aviation world.

‘Eric was one of those rare heroes who become more impressive, the closer you get to them,’ writes Pilot Editor Philip Whiteman, who met the former naval aviator and test pilot on several occasions as well as interviewing him at length for a ‘Pilot Profile’, published in the magazine.

Eric inherited the nickname of ‘Winkle’ – given by tradition to the most diminutive serving Fleet Air Arm pilot – after the previous holder, Lt Cdr Eugene Esmonde lost his life in the Swordfish attack on the German battlecruisers Sharnhorst and Gneisenau, and the heavy cruiser Prinz Eugen during their infamous 1942 ‘Channel dash’.

Serving as a fighter pilot, Eric was no less brave than Esmonde but enjoyed the good fortune of flying superior machinery in the form of the Grumman Martlet (Wildcat). He shot down two heavily-armed Fw 200 Condor four-engine raiders and was one of a handful of survivors when his aircraft carrier was sunk. While a measure of luck may have played a part in him surviving both this ordeal and several flying incidents, it was his great skill as a pilot that carried him through operational flying and his equally, if not even more hazardous career as a test pilot, during and after WWII.

To cite one example of his extraordinary ability: travelling to Liverpool to collect a freshly delivered and unfamiliar flying machine in the form of a Sikorsky R4, the first operational helicopter to be operated by the Allies, Eric was presented not with a briefing by a rotary-wing pilot (none was available) but the flight manual for the aircraft. With only this publication for guidance, Eric had one of the two machines pushed out to the middle of Speke Airport and proceeded to teach himself to hover the aircraft. (As any latter day helicopter pilot will tell you, this tricky task is one of the last handling skills you get to learn…)

A full appreciation of this great aviator will appear in the April edition of Pilot magazine.