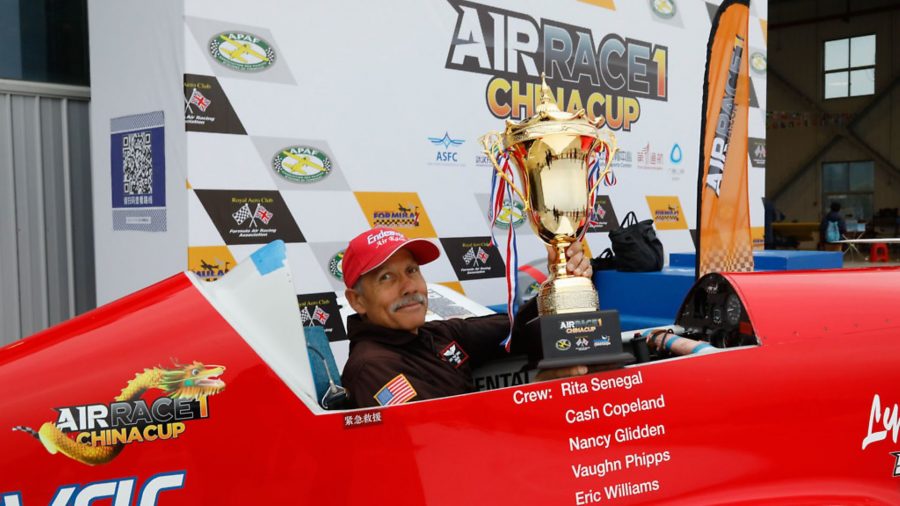 Senegal, from San Bruno in California, held off World Champion and fellow Californian Tim Cone as they battled wingtip-to-wingtip for the top honours at Hannan City Airport, the first-ever air race to be hosted by the People’s Republic.

Cone, winner of the Air Race 1 World Cup event in Thailand in 2017, initially led the Gold Final field in his fast-starting Cassutt racer named “What Airplane Honey”, but after three laps had to succumb to the superior pace of Steve Senegal’s super-sleek Arnold AR-6 “Endeavor”, lapping the 3.07 mile (5.2 km) course at over 240mph.

Third place was taken by Philip Goforth, a former Alaskan bush-pilot in his Cassutt “Annie”.

Steve Senegal, who is a current United Airlines captain, said; “I am very proud to be the first ever winner of the Air Race 1 China Cup.

“China has certainly shown that it has aviation and air racing in its heart and we look forward to coming back again.

“The hospitality and welcome has been fantastic, and the crowds are very knowledgeable about Air Race 1 – I will remember this win for many years to come.

“Tim was quick off the start, but Endeavor came good and it made for a great race.”

Pilots reached speeds of 400km per hour during the weekend of racing in Wuhan.

The Silver Final held earlier in the afternoon demonstrated the truly international nature of the Air Race 1 China Cup, with a popular victory being scored by Genoa, Nevada, aircraft mechanic Steve Tumlin, ahead of Stanislav ‘Stan’ Damiron of France and Trevor Jarvis of Great Britain.

Jeff Zaltman, CEO of Air Race 1, added; “Bringing air racing to China has been a major triumph and the public have fallen in love with Air Race 1.

“I would like to thank our Chinese partners that have helped to make this happen and we look forward to working with them again in the future. Air racing in China is here to stay.”

It was the first race victory for Tumlin as a pilot, after spending several decades as a top crew member in the race paddock.