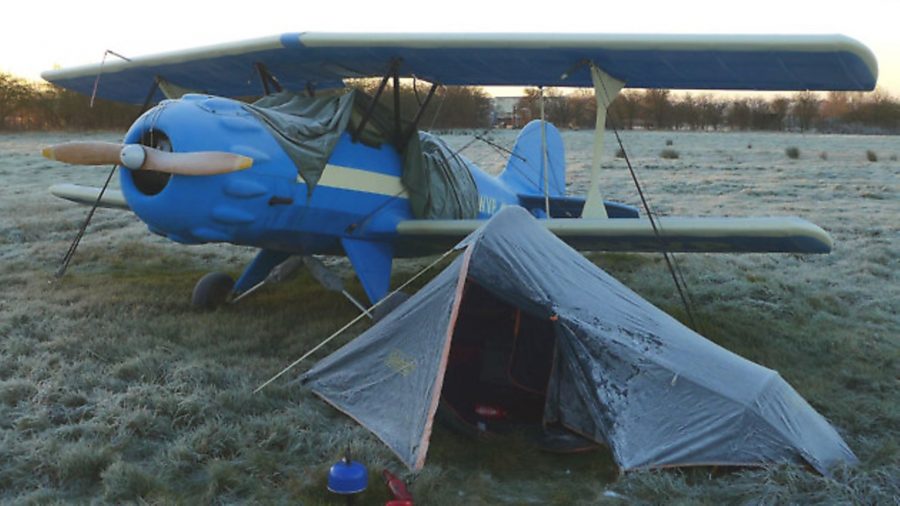 “The Icicle Fly-In has been running since 2006, and sees the hardiest of souls flying into a different airfield each year,” reports Orgainising Committee member Roger Cornwall, who has braved the elements to take part in every one. “The procedure of setting up tents, going to the nearby pub for dinner and a quiz, awards ceremony, then back to the tent, midnight BBQ and fly home the next day, is not so unusual…except the Icicle is held only on weekends when the weather forecast is for sub-zero temperatures.”  The 2014/5 event was originally planned for Long Marston between January and March, but very wet and warm weather at that time prompted deferral until 28-29 December, when the coldest days of the year were forecast, with blue skies and light winds.

“The weathermen were correct,” says Roger, “as at 5 a.m. on the 29th temperatures Long Marston were measured at -7°C outside and -5.5°C inside the tent! The occupants of seventeen aircraft camped, and bizarrely, three pilots turned up in their cars and camped anyway. The Icicle attracts pilots from far afield, in the past from Northern Ireland, Newcastle, Bournemouth, Norfolk and Wales, and 2014/5 was no exception. Aircraft types ranged from flexwing microlights (a 25-year-old Pegasus Q to a ten-hour-old P&M Explorer), and among the fixed-wing types, an AX2000 three-axis microlight to an Alpi Pioneer and a Europa.”

Among winners of awards (comprising cups, medals and Mars bars) were: First Icicle attendee: Glenn Fish, who flew his two-stroke Quantum flexwing 100nm from Scunthorpe. Longest flight/shortest distance: Dave Hinson, who took two hours to fly 47nm in his Pegasus Q flexwing. Furthest travelled: Carl Bayliss and Phil Chapman, who flew from Ince, north of Liverpool. Owner who looks most like their aircraft: Dave Nixon, “an old wrinkly owner in an old aircraft.”