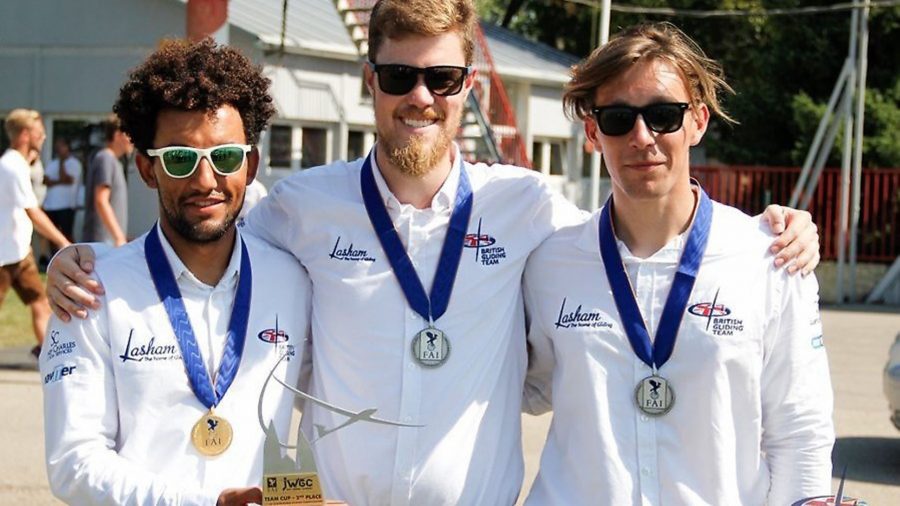 Jake Brattle, 25, from Charlton in Hampshire, has been competing against the world’s top glider pilots at the 11th FAI Junior World Gliding Championships in Szeged, Hungary.

Jake, who has won the UK Junior National Championships for the last two years, said: “It’s an incredible feeling to win a Gold medal for the team and my country. I’m so proud.”

Team GB’s Finn Sleigh, 22, from Andover in Hampshire, is also celebrating after finishing the championships in second place.

Finn said: “I’m lucky to be part of an amazing squad and would like to thank everyone who has supported me and my team mates on our journey to reach the Junior World Gliding Championships in Hungary and played a part in Team GB’s phenomenal success.”

The competition to find a junior world gliding champion took place over thirteen days with points awarded daily to the fastest pilots to fly from point to point around each day’s set cross country task. The competition was fierce from day one with just points separating the top five places right up until the last day’s racing.

The British Gliding Team’s success in Hungary was a huge team effort that started twelve months ago when Finn and Jake first visited the country to learn the conditions.

Jake, a former Ashford schoolboy and University of Bristol graduate, added: “From our tireless families supporting us as crews to the coaches we trained with and to all of the generous crowd funding donors, glider donors and our sponsors that helped us to maximise our training schedule this year; it really could not have happened without everyone’s help and so we are very grateful.”

The new world champion is now encouraging others to try gliding. Jake added: “It’s a very accessible sport with clubs all around the country for all ages and backgrounds. It’s how I started with an introductory flight and just kept going. You could end up in Team GB!”

Team GB’s Peter Carter from Norfolk and Simon Brown from Nottinghamshire also had a great competition with strong final places.

The British Gliding Team trains at Lasham Gliding Society in Alton, Hampshire. For more information about gliding and to find your local gliding club, visit www.gliding.co.uk