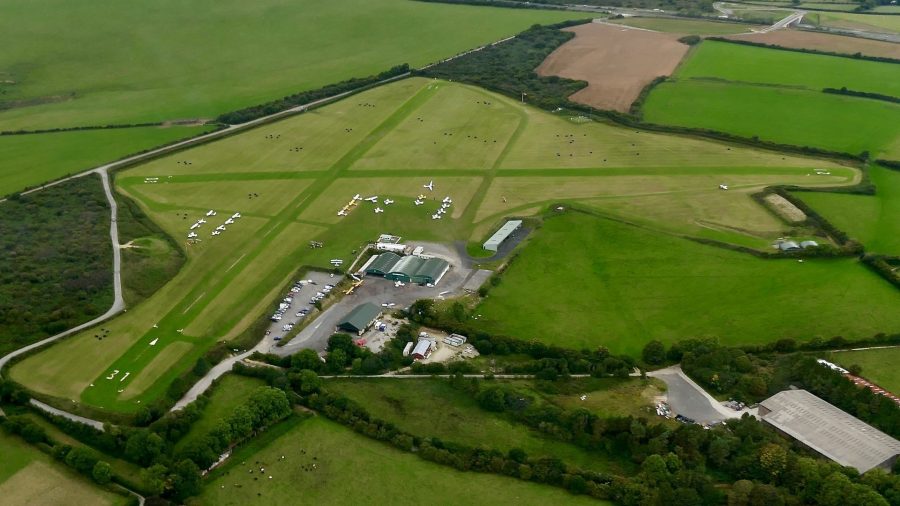 Cornwall’s Bodmin Airfield has been recognised by scientists as having the largest natural hay meadow in the whole of the southwest. Since the end of WWII over 95% of traditional hay meadow has disappeared from the rural British landscape because of modern farming methods, land drainage, industrial development and housing developments. The loss of this type of habitat has had a dramatic effect on the survival of pollinators, namely bees, which are increasingly recognised by scientist as a critical component to keep the balance of the natural environment.

Although now its importance has been recognised, the preservation of the hay meadow at Bodmin airfield occurred mostly by accident rather than by design. The reason for this is that for the past few decades it has had no herbicides, pesticides or harmful fertilisers spread across it, and other than the runways and taxiways, the outfield is only cut once a year. The cuttings are removed from the site by a local farmer for use as silage and fodder for his cattle. The operators of the airfield every year also carry out a thorough removal from the site of ragwort, which can be lethal to sheep, cattle and horses if ingested.

Experts started to appreciate the environmental importance of Bodmin two years ago, when Ian Benallick, a botanical scientist, conducted a survey of the airfield. The study found over 150 species of wild flowers, grasses and ferns and more than three thousand orchids of three distinct species. It was at this point that Benallick told the airfield’s operators about the environmental importance of the site. The discovery led Bodmin airfield to build relationships with many interested organisations and academics to help study and protect the site. Surveys conducted since then have resulted in a growing list of almost 170 species of flora, and soil samples have shown that Bodmin is what the National Vegetation Classification lists as an MG5 Grassland landscape, ie a traditional hay meadow, of which there are now less than six thousand hectares remaining in England.

Darren Fern, chairman of Cornwall Flying Club, explained: “We have an outstanding example of a native English hay meadow, and the seeds from the grasses are highly sought after by farmers wishing to return their fields to their natural state. This is an opportunity for all airfields to be recognised as being environmental heroes, and not the villains. We have these resources because for the past forty odd years, we’ve never used fertiliser, we’ve removed invasive and non-native plants, and all we have done is cut the grass runways, leaving nature to look after the rest of the site. Botanists from all over the country now ask to visit our site. I encourage all airfield owners to contact their local university ecology departments and farming organisations, so that we can share our resource and be viewed in a positive light.

Bodmin airfield has recently received enquiries from several National Trust properties to obtain native grass seeds from the site, as the National Trusts seeks to return some of its sites to their natural state.