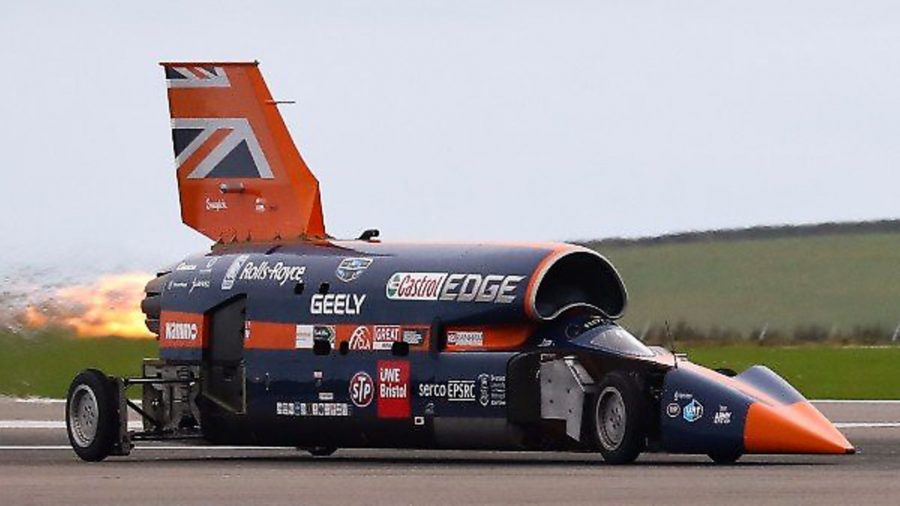 Following successful 200mph (320kmh) UK runway trials at Cornwall Airport Newquay in October 2017, the team will be targeting 500mph – a key milestone on the journey to setting a new World Land Speed Record.

The ‘BLOODHOUND 500’ trials will test the Car’s performance and handling during one of its most vulnerable phases: the point between 400 and 500mph (640-800kmh) where the stability of the Car transitions from being governed by the interaction of the wheels with the desert surface, to being controlled by the the vehicle’s aerodynamics. The grip from the wheels will fall off faster than the aerodynamic forces build up, so this is likely to be the point where the Car is at its least stable.

Data on the interaction between the solid aluminium wheels, which will be used for the first time, coupled with ‘base drag’ measurements, will provide ‘real world’ insight into the power required to set records. Base drag relates to the aerodynamic force produced by low pressure at the rear of the Car, sucking it back. As the Car approaches transonic speeds, this force far exceeds the friction of the air passing over BLOODHOUND’s bodywork.

Hundreds of gigabits of information will be gathered by over 500 sensors built into the Car. This won’t just be used by the BLOODHOUND team, it will be shared with schools around the world, thanks to Cloud Computing partner Oracle. Students will be invited to analyse the data and ‘mark’ the engineers’ homework in real time, as part of the world’s biggest STEM education programme.

The BLOODHOUND Project is inviting supporters to join them for this historic first foray into transonic speeds. A limited number of ‘All Access’ places are available now for pre-booking, via http://www.bloodhoundssc.com/bloodhound500. Guests will visit the Desert Technical Centre, attend team briefings and meet driver Andy Green.

The BLOODHOUND 500 tests will be conducted using the Car’s Rolls-Royce EJ200 jet engine, normally found in a Eurofighter Typhoon, which produces a peak thrust of 20,000 lbs (90 kilonewtons), equivalent to 54,000 thrust hp, or the combined output of 360 family cars.

The Car will run for the first time with its solid aluminium wheels, specially designed for the desert surface. Measuring 900mm in diameter and weighing 95kgs each, they are designed to spin at up to 10,200rpm (revolutions per minute) – more than four times faster than wheels on an F1 car at top speed. The result of 30 years of research and design, they were created by an international consortium and forged from one of the highest aircraft grade aluminium alloys in the world: 7037.

The wheels have a V shaped keel which digs into the alkali playa (baked mud) surface by 25mm when the Car is stationary. As speeds increase, the wheels will rise up out of the mud surface and plane in much the same way as a speedboat rides up on the surface of the water. At 500mph (804kmh) and above, just a few millimetres of metal will be in contact with the desert surface, and the giant alumimium discs will act more like rudders than the wheels on a conventional car.

The 12 mile (19km) desert racetrack has been prepared by 317 members of the local Mier community. They have moved 16,000 tonnes of rock from 22 million square metres of dry lakebed, the largest area of land ever cleared by hand for a motorsport event, testimony to the partnership forged between the BLOODHOUND Team, the local community and the Northern Cape Government.

Engineering Director Mark Chapman said: “The track is 19km by 500m, with large safety areas on both sides. This allows us to lay out up to 50 individual tracks side by side. This is important as we can’t run over the same piece of ground twice because the Car will break up the baked mud surface as it passes. We need multiple tracks so we can build speed slowly and safely – going up in 50mph (80km/h) steps, comparing real-world results with theoretical data – and Hakskeen is the perfect place to do this.

“The surface is hard, too, which means we’ve been able to design slightly narrower wheels that reduce aerodynamic drag. The desert surface also has a slight degree of ‘give’, which will work with the suspension to give a smoother ride, reducing vibration inside the Car.”

Andy Green said, “BLOODHOUND 500 is a key milestone on the route to setting a 1,000mph record. Building on everything we learned in Newquay this October, we’ll learn a tremendous amount by going fast on the desert the Car was designed to run on. We hope you can join us in the Kalahari desert to share this experience first-hand.”