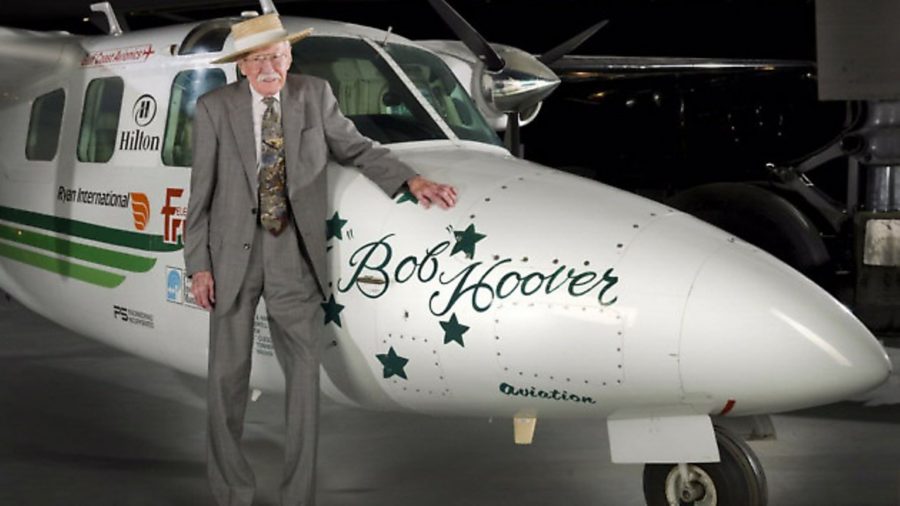 Described as the ‘greatest stick-and-rudder man who ever lived’, Hoover spent a lifetime in the skies reaching new horizons of what was possible as a pilot

The aviation world is in mourning at the passing of one of history’s greatest pilots, Bob Hoover. He died, at the age of 94, of congestive heart failure at a California hospital on Tuesday.

Anyone who saw the American perform his breathtaking aerobatic displays at one of the thousands of airshows over the decades will never forget his feats of courage and control. Crowds were left agog at his signature act of cutting both engines of his Shrike Commander before executing perfect ‘dead-stick’ loops and rolls.

In his characteristic Panama hat and business suit (which, as he remarked, he often flew in as it would be ‘less trouble for the undertaker in case of an accident’), Hoover entertained crowds on the ground too, with stories of flying in World War II or his days as a pioneering test pilot.

In a career spanning six decades, he met and befriended legendary names from the history of aviation – Orville Wright, Charles Lindbergh, Chuck Yeager, Yuri Gagarin and Neil Armstrong to name a few. And they all ranked him among the best, which is how he became known as the ‘pilot’s pilot’.

Jimmy Doolittle, the man behind the Doolittle Raid of World War II, said Hoover was the ‘greatest stick-and-rudder man who ever lived’, while astronaut Buzz Aldrin tweeted a tribute on hearing of his death, which read: ‘He could do magical things in an airplane. He was the best.’

Robert Anderson Hoover, born in 1922, began flying at the age of 15, funding his lessons by working in a grocery store. Within a few years, he had taught himself the basics of aerobatics, had enlisted in the Tennessee National Guard and received orders to Army Pilot Training School.

In World War II, he served in North Africa and Europe, where he flew 58 missions with the 52nd Fighter Group. He would be awarded the Distinguished Flying Cross, the Soldier’s Medal for valour, the Air Medal, the Purple Heart and the French Croix de Guerre.

On 9 February 1944, his Spitfire was shot down above southern France and Hoover was captured by the Germans. After 16 months in a prisoner of war camp, as the war was reaching its end, he managed to escape.

He stole a Focke-Wulf Fw 190 and flew to the Netherlands, risking being shot down by Allied forces who would mistake him for the enemy. In fact, when he landed with the fuel tanks nearly empty, he was confronted by Dutch farmers wielding pitchforks, who believed him to be German.

After the war, Hoover stayed in the military so he could test pioneering aircraft in the early days of the jet age. When his friend Chuck Yeager broke the sound barrier in 1947, Hoover was flying behind the Bell X-1 as chase pilot, taking photographs of the historic moment.

He continued to test aircraft after leaving the US Air Force, for General Motors, North American Aviation and North American Rockwell, which included being sent to Korea to instruct pilots how to dive-bomb in the F-86 Sabre.

It was in the early 1960s that Hoover began travelling the world demonstrating his extraordinary skills for aerobatics. He flew in more than 2,500 airshows performing stunts the likes had never been seen before, such as pouring an iced tea during a barrel roll without spilling a drop.

On a trip to Soviet Russia in 1966, however, his skills and control almost got him into trouble. After outperforming the local pilots, and in a Russian aircraft no less, the KGB took Hoover into custody. He was only saved by a drunken Gagarin, a national superstar after becoming the first man in space, as the two were friends, despite not speaking the same language.

Although he flew around 300 aircraft during his career, Hoover is best known for his iconic P-51 Mustang, which he dubbed ‘Ole Yeller’, and the twin-engined Shrike. The sight and sounds of these aircraft would delight crowds, ready to be wowed by his latest set of intricately prepared stunts.

Then back on the ground, he was always smiling, signing autographs and happy to regale everyone with a story.

‘It’s fair to say that anyone who ever had the privilege of flying with Bob, saw him perform at an airshow or who heard him speak, was affected tremendously by the experience,’ said Andrew Brown, executive director at Citation Jets Pilots Association, on hearing of his death.

Such was the affection and admiration for Hoover that when the Federal Aviation Administration revoked his medical certificate in 1994, threatening to ground him forever, that fans from all over the world expressed their outrage. The FAA eventually reinstated Hoover’s status, and he would go on to fly until he was well into his 80s. He lived out the rest of his life in California with his wife of 68 years, Colleen, who also died this year.

‘Bob Hoover brought great richness to the aviation experience, and he leaves behind a legacy of heroic caring and sharing with the general aviation community,’ said president of the Aircraft Owners and Pilots Association Mark Baker in a heartfelt tribute.

‘Bob was so much more than a great pilot. He was a great man and a model for what our community can and should be.’