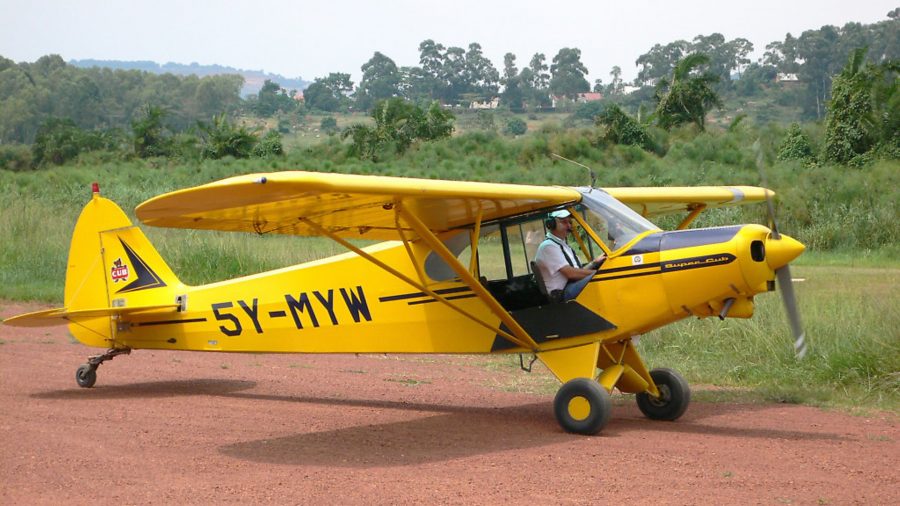 Continuing our series on flying from an island base in Africa. Part Two: Setting up a business flying venture — without an aeroplane!

It’s all very well creating an airfield on a tropical island in the middle of Africa, it is quite another thing to maintain it! For a start there are the termites. Aeroplanes don’t like falling into holes, so every morning a groundsman walks the runway, stamping as he goes, feeling for softness beneath the dewy surface and listening for a change in the sound of his footsteps?the sign that termites have burrowed under since his last patrol.

Hole found, he calls in a team of men to dig down to root out the queen termite and then fill in the void. The queen termite looks exactly like the front end of a large ant with its rear end stuck in the bulging, pus-filled condom that is her egg-making machinery?disgusting.

The next thing is the grass. It’s a tropical island. Annual rainfall is 1.5-2.5 metres?that’s eight feet of rain. The temperature is always in the twenties and, being bang on the equator, there are always twelve hours of daylight, mostly sunshine. Grass likes this combination. After a year of cutting the runway, our ancient tractor gave up the ghost and could no longer pull our mower, and within a couple of weeks the grass was thick and long.

I would soon have to close the runway. That meant no flying visits from Madam from the aeroclub, on whom I was rather keen. Clearly urgent action was needed. A search on the mainland turned up a perfect little Kubota tractor fresh in from Japan, but how on earth to get it to the island post haste? I called a chum, who happened to be the air force commander.

“Hello General,” I said. “Don’t suppose I could borrow a helicopter, could I?” “Why?” he asked?suspiciously, I thought. “I need to get a tractor to my island. I thought we could tie it underneath one of your helicopters. It’s only ten miles…” “You will owe me a favour, Cooper.” “I will indeed,” I acknowledged.

My brilliant idea was that we’d sling the tractor under the helicopter and, better still, I could sit on the tractor and enjoy the ride, skimming across the lake. I thought it would be novel. What could possibly go wrong? Madam didn’t see it that way. Only recently on intimate terms, she was still pinching herself daily, struggling to work out how on earth she had ended up with such an oaf for a boyfriend. She looked at me incredulously. “Are you serious?” she asked, ennunciating each word carefully, checking I wasn’t joking. “Well, yes”, I said. “I thought it would be exciting, and I was planning to sing a jolly little Russian tractor song as we skim across the lake, me and my tractor?rather spiritual,” I explained.

Madam looked deep into my eyes, searching once again for signs of incipient mental infirmity. “No!” she said. Firmly. “Oh,” I sighed, dejectedly. Such was my life becoming.

A few days later I pitched up at the military airport with the bright orange Kubota strapped onto a low loader. The first problem was that the pilot?who was Ukrainian, I think?was not keen on under-slung loads. He didn’t seem to trust the groundcrew to secure the load. Scrutinising the groundcrew I too had my doubts. We looked at the tractor, and then at the Mi-17 helicopter, several times. We sucked our teeth and all looked pensive. We lowered the helicopter’s loading ramp and sucked our teeth some more. Then, ever so gingerly, we tried the loading bay for size… by driving the tractor into the belly of the Mi-17. Amazing! The Kubota fitted?just. We all piled into the helicopter around the tractor and twenty minutes later it was driven out of the back of the Mi-17 onto the grass on the island.

Runway restored to health, my thoughts turned to flying?my flying, that is. I clearly needed to learn how. I’d had a couple of lessons in a C172 but the logistics of travelling back and forth to the aeroclub on the mainland defeated me, so I gave up. The one thing I learned was that C172s don’t do the one and only thing I really wanted to do: aerobatics, which my teenage self had done in Air Experience Flight Chipmunks. The solution came to me in a blinding flash: I needed my own aeroplane. I spent time considering this epiphany. How will I explain this to Madam? What aeroplane do we need? How will we afford it? Is this sensible?

In the event I needn’t have worried and should have known better, if I’d thought about it for one second. One of her grandfathers a Hurricane pilot in the Battle of France, the other an Air Chief Marshall, 82 Squadron at the start of the war, a CPL herself, and an A&P mechanic to boot. Flight was in her blood. Yes, she agreed, of course we need an aeroplane. But on one condition: it must earn its keep.

Now, one of the good things about an island is the isolation. Devoid of guests or house-owners during the week, there is plenty of time to ponder. The question was simple: how to get an aerobatic aircraft that could pay for itself in our poor African country, where private aviation consisted of perhaps four aircraft at most. Thank God for the internet, and the focus that comes when one really wants something. Another phone call. This time to a chum, Erik from South Africa. Erik was number two in a mobile telephone company, MTN, which was aggressively asserting its number one market position.

“Erik, I have an idea that might be of interest. Got two minutes?” “Shoot,” he answered. “Aerial advertising,” I said, “It’s what you need.” “You’re kidding.” “No,” I continued, “It’s a great idea?banners, leaflets, displays, skywriting. It’s endless what we can do,” I said, making it up as I went along.

“Seriously?” “Yes,” I replied, lying. “Come and see me,” were his encouraging last words. Two weeks later we were signing contracts.

I was taking MTN’s money, a quarter of a million US dollars of it, but had no aeroplane, few ideas and, to be honest, no way of fulfilling the contract. Why let piffling details get in the way? Then the hammer dropped?hard. The phone rang. “Tim, I’ve got a job for you guys.” “Great, Erik. Looking forward to it. What is it?” My stomach churned. “We’ve just booked UB40 for a concert?the biggest concert this country has ever seen.” My stomach did backflips. “We need some real exposure,” he went on. “We’ve got to promote this thing. We need to fly a banner?a lot.” “No problems, Erik. I’ll drop by tomorrow.” I went and sat down.

A Nairobi-based, ex-Swissair engineer, now running his own small charter outfit had a Piper Cub. His Cub had a tow hook and he regularly towed gliders. The Cub was bright yellow?a bonus since the client’s corporate colour was exactly the same. We agreed a deal. The banner was slightly more problematic.

The mainland runway we were to use was at 4,000 feet AMSL, and temperatures sat in the mid-twenties?far from ideal for banner pick-ups with a standard aeroplane. A German company had patented a banner system designed for microlights, and their CAA had approved its commercial use.

The system is thus: the cricket wicket-sized banner is laid out on the ground and a pole slid through a pocket at the front end. Eighteen-inch-diameter, light nylon disc wheels are secured at each end of the pole. A weighted plastic tube is fitted at one end of the pole to keep the banner flying right side up. A bridle, or spider attaches at various points to the pole, and this is attached to the tow line by a swivel. There is a ‘weak link’ at the aircraft end of the tow line in case the banner should snag on something solid.

With the German system, the pilot takes off as if he or she were towing a glider instead of diving down with a grappling line to hook the banner in the traditional and slightly hazardous way. The pole rolls along the ground on its wheels and the banner flutters behind in ground effect. When the aircraft leaves the ground the pole follows, and swivels through ninety degrees so that the weighted end stays down and the banner is vertical?simple and safe. I asked my new, best German friend on the end of the phone whether this system really worked. He assured me it did and sent a video. We were sold. A banner was commissioned and a towing kit ordered.

The banner arrived just in time to promote the concert?phew?and the Cub flew in, raring to go. Being the first-ever commercial banner-tow in our part of Africa, the CAA felt they needed to be involved, and rightly so. However, I soon smelled a rat when two flight inspectors arrived who, while having no interest whatsoever in either the aircraft or the banner system, took an unusual interest in whether an aeroplane from a neighbouring country could work in ours. The sub-text was quite clear: a small emolument would clear up the matter. We ignored the unspoken suggestion.

Discouraged, the CAA gave us the go-ahead to tow our banner.

We would carry on ignoring such requests. Madam, in particular, was appalled by the idea that the body responsible for safety could be for sale. Our straight bat policy eventually caused us enormous problems. In the long term, those companies who either succumbed or participated with glee in these games profited. It is a cultural problem. In Africa?and elsewhere, to be fair?positions of power, however tenuous that power may be, are often exploited as revenue-earning opportunities. And while that may be annoying when having to pay the police ‘a soda’ to proceed through a roadblock, it is entirely different when one can buy an Air Operator’s Certificate regardless of standards met.

Chickens do come home to roost, and some years later ICAO caught up with our CAA and effectively closed it down?unfortunately closing all aviation in our country too.

Our banner was a great success. The Cub flew around and around; the client was delighted. I was amazed that it had worked; Madam was given some hope that her significant other was not completely idiotic. Now it was time for our own aeroplane. Have you ever looked online for opinions on the perfect aeroplane? If not; don’t! It will make your head explode.