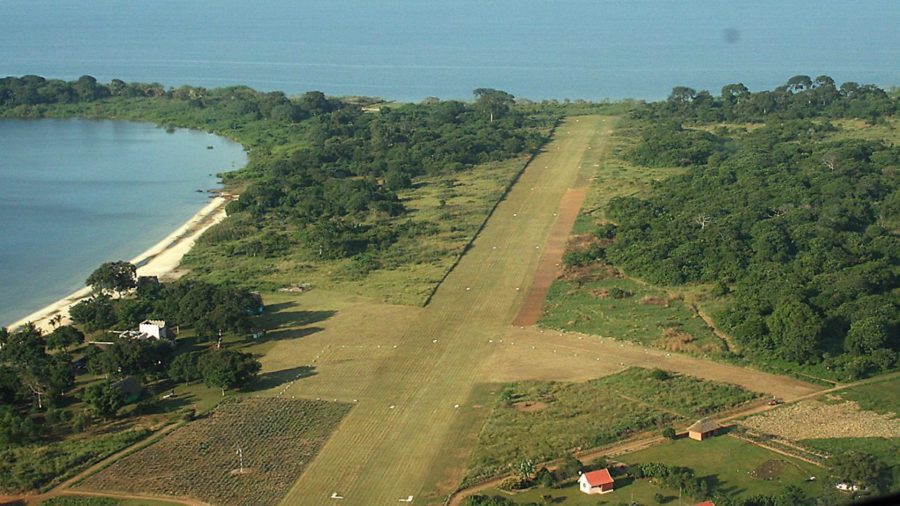 Always idyllic, sometimes dangerous, quite different, and often fun, African island living was certainly never boring. This is the first part of a new series…

In 2014 Tim Cooper and his wife sold their shares in the small aviation company they had founded in Africa in 2008. This is the first part of the story of six years of adventure, frustration, learning, war, peace, fun and sometimes madness.

I didn’t intend to start an aviation company, but there was this girl… OK, let me go back to the beginning. At the turn of the century I owned a tropical island in Africa with two partners. Sandy beaches, a towering hill, rainforest, savannah, and a climate to die for. An idyllic square mile of paradise. We built a small tourist lodge and sold plots of land for private houses.

After countless banging, crashing thirty-mile return trips to the mainland in speedboats over choppy water my back was in agony. Many of our guests complained about the journey too. It was worse still for our African visitors, most of whom couldn’t swim and had been brought up to fear the water. Indeed, the lake is named for the god which inhabits it and which is a greedy god, gobbling up hundreds of hapless fishermen each year.

speedboats are not cheap to run. Moreover I’d always been a little air-minded ever since schoolboy cadet flying in Chipmunks.

I surveyed the most likely looking runway sites with a chum who ran the local aero club and who had a house on the island. We reckoned we could squeeze in a one thousand metre runway built on the flattest part of the island?and, fortuitously, it would more or less point into the predominant onshore/offshore wind system. Better still, it had a beach at the threshold and an unobstructed climb-out over water. My board of directors agreed that a tropical island was one thing, but a tropical island with a private airport was quite another, and the price of the plots we sold for private houses would get a real boost.

I researched how to build a runway. In the absence of guidance from our own CAA, I settled on the New Zealand CAA’s clear how-to documents. A plan was drawn up and we started slashing and digging. Well, when I say we I mean Team Bulldozer. Team Bulldozer consisted of a dozen men from a hill tribe from the far south-west of the country. The tribe is famed for its extraordinary ability to dig. And dig and dig and dig. And that is what they did. Using machetes they first slashed a sixty-metre wide airstrip out of the elephant grass and then dug out the runway with their mattocks?a strip twenty metres wide and at least one metre deep for eleven hundred metres. The runway had to be dug like a giant cabbage patch to rid it of the countless termite mounds. Team Bulldozer turned over twenty thousand cubic metres of soil?about 1,300 lorry loads?over 100 lorries per man; an extraordinary feat.

Windsocks were knocked up by a local haberdasher, concrete edge markers were cast and laid, and a parking area demarcated. Half a year after starting came the big day. My aero club chum made the first landing in a Cessna 172. It went well despite the runway being just a great long expanse of semi-dry mud; we’d have to wait a while before grass took hold and bound the surface tightly. “Here’s to a successful and drama-free beginning!” we opened cold beers and congratulated ourselves. Our toast tempted fate; it wasn’t long before our first drama.

I used to trade joyrides in a missionary-operated Cessna 185 floatplane for full English breakfasts. The pilot, an old-but-not-bold hand from Jersey, would land in our kilometre-wide bay, taxi up to the beach and have a lazy breakfast. We would then clamber up into his floatplane and zoom around the lake and the surrounding islands. Glorious. After a while these visits stopped until one day a replacement pilot arrived for breakfast. Same arrangement as before but a very different way of flying: much busier, much flapping of flaps to break free of the surface of the water, not the unruffled Channel Islander’s laconic economy of control. To be fair, the lake is at nearly 4,000 feet AMSL, the temperature is in the high twenties and being a freshwater lake there isn’t the buoyancy of saltwater, so there is always an element of challenge.

A couple of weeks drifted by and the weather changed. The lake has the highest count of lightning strikes in the world and vast cumulonimbus clouds regularly top out well over 50,000 feet. When the inter-tropical convergence zone moves overhead these monstrous storms seem to intensify. While utterly awesome and quite beautiful to watch, they can be lethal?in Africa beauty often signals danger.

We had had a fortnight of severe storms and the lake was in turmoil. We hunkered down on our island and enjoyed more cold beer and admired the skies. Then came a phone call from my missionary friends, “Our floatplane is stranded”. “Where?” I enquired. “Two islands to the south of you.” “What happened?” I asked. “One of the floats is holed and the pilot and two passengers are stranded. Can you help?” “Oh dear!” I said.

Oh dear, indeed. Looking at the agitated state of the lake I decided to take our sturdiest boat, one of our soldiers (we had been issued with a detachment of those), our maintenance guy and a glass fibre repair kit from our stores. A frightening fifteen-mile trip followed before we found the small island. An elongated rectangular shape, the island was only a couple of hundred metres north to south, but about a mile from east to west.

The great thing about a small island is that there is always a lee shore and always a windward shore close at hand giving shelter from storms?which is exactly what our new pilot had discovered. He had flown in with two young missionaries who were looking for a site for a new mission. On arrival the weather and the lake’s surface state were acceptable and the floatplane had taxied to the village on the north shore where it beached without incident. When it came time to leave a storm cell had whipped up the waves and a takeoff in the metre high chop was impossible.

The pilot realised that if the north shore was untenable then the south shore would be the windward shore and would be calm. Having told the missionaries to walk across to the south shore, he set off cautiously to taxi around the island in the aircraft. Too slow! By the time he had made it around the island another passing storm cell had whipped up the waters on the southern shore. Ordering the missionaries back to the village on the north shore he set off once again to taxi around the island. He was now playing cat and mouse with storm cells but decided that if he was quick he could manage a departure.

Missionaries loaded aboard, he set off, turned his aircraft into the wind and opened the throttle. Unfortunately the wind from yet another Cb was gaining strength and with its winds revolving rapidly the 185 would not unstick. Instead, barely on the step and being jolted and tossed around, she smashed straight into submerged rocks, opening a great jagged hole in the starboard float and yawing her to an abrupt stop. To add insult to injury the heavens opened, the rain poured down in torrents.

Leaving my maintenance guy to patch the hole, and the soldier to ensure there would still be an aeroplane when we returned, we set off back in our boat in the dark. The lake was worse than I had ever seen it, with steep choppy waves on top of a swell that towered above us. While the pilot looked merely dejected, the missionaries looked positively terrified; having survived an aircraft crash they were now going to be shipwrecked and probably drowned. Their faith was being tested?or their sins punished.

A hearty supper and clean, dry beds restored morale. The following morning?the lake now calm and idyllic?the pilot set off by boat to fetch his patched-up floatplane. The missionaries had sub-chartered my aero club chum to return to the mainland. A Cessna 210 duly appeared, alighted carefully on the soggy runway and cautiously taxied off the now very muddy runway into the parking area. The missionaries were loaded aboard and the 210 started to taxi for departure when all of a sudden the poor aeroplane disappeared nosewheel first into the mud, nearly up to her cowlings, the propeller furrowing a trench in the soft earth. The rain had flooded a termite

nest, buried deeper even than Team Bulldozer’s digging, and created a gigantic underground cavity covered by a thin crust of damp soil.

Termites and their holes gave us problems for years. Team Bulldozer started digging at any sign of the termites and it was an endless task. Over the years the termites bagged a couple of C206s, a Fuji (twice), two C210s, a Caravan, an An-2, an Mi 17 helicopter and a Partenavia P68. The little buggers also got the Presidential helicopter?with the President on board. Mostly aircraft gently dropped a wheel into termite holes when stopped or when turning and were easy to lift out, no damage done. The enormous An-2 biplane took a little more time to lift out by hand.

Other visitors graced our new island aerodrome. One in particular stands out. Let us call him Monsieur Diplomat to save his blushes. He had brought a fabulous little ultralight motor-glider with him from Europe when posted to Africa. He had become known for the Gallic insouciance which characterised his aviation. For example, in those pre-EASA days, when asked why his motor-glider carried the registration marks of both the central European country where it was made, and the European country where he lived, he would simply explain that he could choose whichever regulations suited him best at the time.

He sprung to notoriety in my chum’s aero club when he explained that he had taken his son for a quite serious and several hours long jolly in the motor glider, but couldn’t understand why the poor boy, no more than ten years old, had failed to appreciate the trip?he had simply slept most of the way. Monsieur Diplomat went on to extol the virtues of his motor glider’s performance which had given him and his sleepy son a glorious vantage point from over 18,000 feet up.

We managed to do some quite serious thermalling?with the engine turned off?well out of gliding distance of any land and, better still, bang in the middle of the visual approach into the only international airport in the country. When I gently mentioned this to him, he shrugged, cranked the small ultralight onto its side and headed for the deck. He then decided that he should show me some more tricks. These were semi-aerobatic, the finale of which was to carry out a series of what I now know as a falling leaf, the last of which ended just a little below the top of the 350 foot high hill on the island. Ooh la la!

The runway on the island was my entry into the world of aviation as a business activity. Life changed unexpectedly when one day a C172 rolled into the parking area. Out stepped my wife. Not that I knew that at the time. Before matrimony came an aviation company and six years of great adventure.