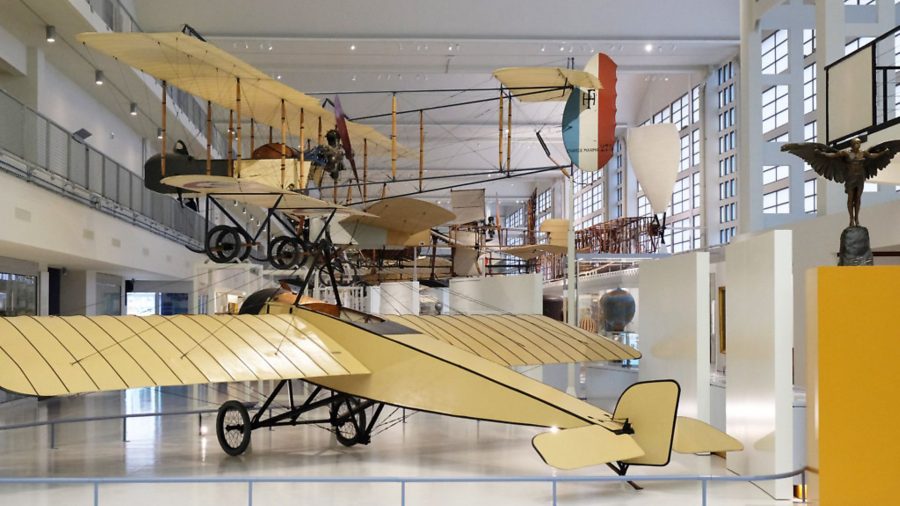 Among aerospace collections, France’s Musée de l’Air et de l’Aerospace?its national air & space museum?has long been regarded as one of the world’s finest, especially when it comes to pioneering and WWI aircraft.

Sadly, these particular exhibits have long been hidden from public view while the Grande Galerie in which they were housed was refurbished.

This changed in December last year when, after five years’ worth of renovation work on the old terminal building at Paris-Le Bourget, the gallery was reopened.

Pilot was invited to a press viewing prior to the public opening, which took place at the end of the museum’s centenary year. Established in 1919 in a hangar at Issy-les-Moulineaux as an aeronautical preservation association, it was initially known as Les Collections de l’Aéronautique.

The Musée de l’Air name was only adopted in 1936, when part of the collection was moved to the Boulevard Victor in Paris.

Three years later, on the eve of WWII, the Boulevard Victor gallery was closed, which was just as well, as the building was subsequently damaged by German bombing.

Fortunately much of the collection remained at Chalais-Meudon, the military establishment to which it had first been relocated in 1920-21.

After the war there was a hiatus and it was not until 1960 that Chalais-Meudon was opened up to the public. The move to Le Bourget, still active as an airport and famed as Charles Lindberg’s landing point at the conclusion of his epic 1927 transatlantic solo flight, was made in 1973.

This was the question on the lips of all the aviation journalists invited to the Grande Galerie’s reopening.

The Musee de l’Air et d l’Aerospace’s most famous exhibit was nowhere to be seen. It seems that the much admired fine art conservation technique of stretching the aeroplane’s irreplaceable original fabric covering over new material has failed, the linen blistering and the paint cracking and lifting.

In a press release, the museum says that ‘between now and 2024, [we] will be staging an exciting new project: the restoration of Georges Guynemer’s Spad VII aircraft, on loan from the French Army Museum.

‘As the last surviving specimen of the many fighter planes in which the flying ace achieved 53 aerial victories, in the early 1980s this aircraft underwent extensive restoration work… Forty years later, the plane is in need of further restoration work before being put back on display.

‘The historical and symbolic significance of this aircraft is such that the museum intends to orchestrate its restoration within an altogether special setting.

‘Taking place in an area at Le Bourget providing climate [controlled] conditions compatible with the condition of this airplane, visitors will be able to follow each and every stage of the conservator-restorers’ work.

‘[This will offer] a unique opportunity to give them insight, through the care lavished on an item from the technical collections, into a Museum of France’s conservation duties.’ A highly laudable plan, we would say.

The ‘space’ part of the museum’s title was added in 1983, by which time Le Bourget had ceased to be one of Paris’s main airports and was confined to business aviation?and, of course, the great biennial airshow.

Justifiably described as an ‘incomparable setting’, the terminal was built in 1937. Partly destroyed during the German occupation, it was rebuilt almost exactly as before in 1946.

Ironically, it was not war damage but 1970s remodelling?with canopies and walkways hiding the glass ceiling and windows?that lost the old terminal’s spacious volumes and striking Art Deco design.

All this has now been rectified during the course of the €26.5 restoration and refurbishment of building and exhibits, €21.5m of which was provided by the French Ministry of Defence, with a further €5m coming from GIFAS?the association of French aeronautical companies.

Visitors now enter the museum through the hugely impressive Hall of the Eight Pillars, opposite arrival and departure porticos with signage in 1930s lettering, very much setting the scene ‘and whisking them back in time’, as the Musée’s directors have it.

To travel through history in sequence, one turns right from the rather wonderful reception desk to enter the lofty, spacious volumes of the North wing, which houses the pioneering aircraft.

Let it not be forgotten that manned flight began in France, Jean-François Pilâtre de Rozier and the Marquis of Arlandes in 1783 making the first free ascent in a hot air balloon built by the Montgolfier brothers.

One of the first exhibits you come across is a great bronze medallion portraying the Montgolfiers, alongside an array of artefacts testimony to the mania that surrounded early balloon flying.

These are beautifully presented, more in the style of a fine art gallery than the fashionable interactive displays favoured in British museums of late.

The rest of the collection

Beyond the Grande Galerie are eight other rooms, arranged chronologically and around themes, as well as the museum’s outdoor exhibition, which includes Ariane I and V rockets and even an Airbus A380.

The Interwar Hall is dedicated to the history of the great long-distance aviation challenges. Exhibits include Costes and Bellonte’s bright red biplane Point d’Interrogation, which they flew from Paris to New York and the jettisoned undercarriage of Nungesser and Coli’s plane, l’Oiseau Blanc, which was lost with its crew somewhere between Le Bourget and New England.

The World War II Hall, entirely renovated and inaugurated in June 2015, gives an overview of WWII fighter aircraft and includes a C-47 visitors can board for a D Day paratrooper experience.

Rounding off the WWII collection, the permanent exhibition on show in the Normandy Niemen Space delves into the incredible history of a unit of the Free French Air Forces that fought alongside the Soviets against Nazism Spanning several eras, the Rotary-Wing Hall gives pride of place to helicopters and autogyros, from Oehmichen’s helicostat no.6, dating from 1935, to the Cierva C8-2 – the first autogiro to have crossed the Channel – to the Alouette III of the high-mountain rescue squad of the French Gendarmerie.

The Roundel Hall is dedicated to French military aviation with the displays of aircraft that the French Air Force has used from the 1950s through until today. One of the star exhibits is a Mirage 2000, a multirole fighter jet that equipped the French Army from 1984.

The Prototype Hall sheds light on the technological leaps and bounds of the years immediately following WWII and the age of the jet. Exhibits include the Leduc 010 research aircraft, designed to be released from a mother aircraft, the Triton, the first French jet aircraft, and the Mirage III-V-01, a VTOL prototype and rival to the British Harrier.

Concorde has been assigned its very own exhibition space in the Concorde Hall. Two examples of the supersonic jetliner are on display, one of them prototype 001 FWTSS, which accomplished the first ever flight in 1969.

Finally, the Space Collection aims to embrace the full history of mankind’s conquest of space, taking in the sounding rockets, Ariane I and V, the Apollo missions, a Soyuz T-6 capsule used by Jean-Loup Chrétien, the first Frenchman in space, as well as his original space suit.

That is not to say that video screens are absent, but here visitors are challenged and impressed by the quality of the exhibits and not distracted by game play on consoles.

Things like the newly restored gondola of the world’s first dirigible airship, La France?a fantastic structure of bamboo and wickerwork with a seven metre diameter propeller at its stern?need no gimmickry to understand their majesty: it’s there in front of you to be seen.

The aeroplanes on display are absolutely… well, magnificent really is the only word for it.

Some?like the 1908 Antoinette type VII monoplane?will be familiar both from the history books and (yes) the film Those magnificent Men in Their Flying Machines.

Various UK museums have replica Santos-Dumont Demoiselles on display and the Shuttleworth Collection regularly flies its Bristol Boxkite and Avro Triplane?but none of these have period engines, and all incorporate some liberties in concession to latter day construction techniques and airworthiness requirements.

At Le Bourget you are presented with the real thing, it all its beauty?the craftsmanship and quality of the original materials is there to been seen?as well as the hazards apparent in their design (fancy a flight in the 1911 Fabre seaplane?)

Sadly, all the gaiety and sport of the Belle Époque and Edwardian era gave way to military use of the aircraft in earnest from 1914, and this is the subject of the Grande Galerie’s South Wing.

Striking exhibits among more familiar aircraft like the Nieuport 17 and Fokker DVII are the Zeppelin gondola and one further great treasure, the Junkers D1.

How astonishing to learn that the latter?the world’s first all-metal, cantilever-wing fighter, very much a modern aeroplane?flew only ten years or so after European aviators made their first hops in wire-braced wooden craft.

Close inspection of the museum’s D1 reveals that, like the 1940s North American T-6 flight tested elsewhere in this issue, it was even fitted with a crash pylon to protect the pilot in the case of an upset.

The show goes on beyond the Grande Galerie with a vast number of exhibits and airframes too numerous to take in during just one visit (see ‘The rest of the collection’, p.50).

The Musée de l’Air et de l’Aerospace is, as I said at the outset, one of the world’s finest collections of aircraft, spacecraft, aviation artefacts and ephemera.

When you take into account its historic airfield setting?Le Bourget was established in 1914?and the new wonder that is the brilliantly refurbished Art Deco airport terminal building, this isn’t one of the world’s finest aerospace museums, it is quite simply the finest – and, ironically, thanks to the convenience the Eurostar service, it is today only a short rail journey away from London.

No self-respecting aircraft enthusiast or pilot’s life is complete without a visit to Le Bourget!

Ticket for the museum and aircraft: €16

The museum also organises an array of events throughout the year: Planète Pilote (specially laid out area with activities for six- to twelve-year-olds), planetarium sessions and simulator workshops. Information and prices available online from www.museeairespace.fr