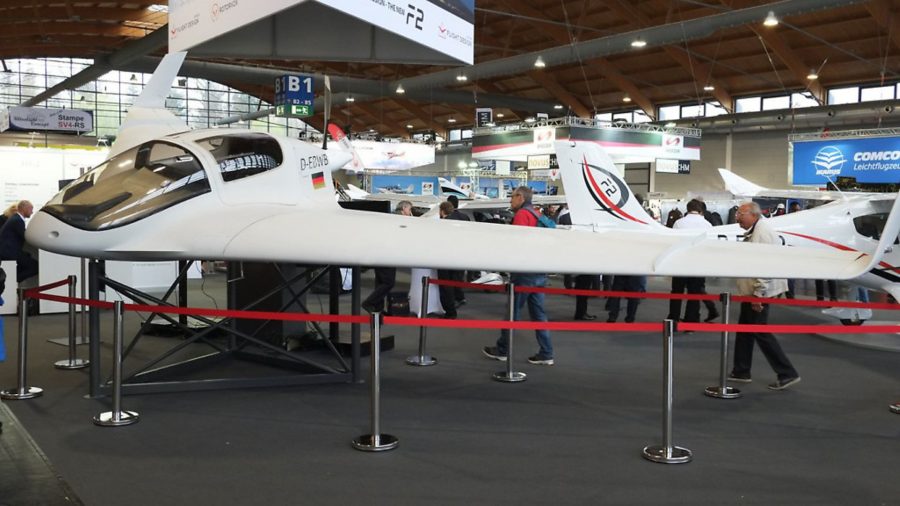 With uncharacteristically poor weather marring its opening days and causing some last-minute changes of plan among fly-in visitors, AERO 2019 seemed a little quieter than last year, although exhibitor numbers have swelled to a record 757

Certainly there was an extraordinarily wide range of aircraft, engines and aviation-associated ephemera to be found at Messe Friedrichshafen, on the shores of Lake Constance in Germany – and the big guns in European GA, Diamond and Tecnam had arrayed their competing models in a broadside confrontation across Hall A4.

The newly-certified Tecnam P2012 Traveller was the most obvious debutante, shadowing another Tecnam newbie that might have passed unnoticed were it not for its dramatically transformed shape.

This is Mk II version of the P92 ultralight, which now has a svelte carbon fibre fuselage, which not only transforms the look of the twenty-year-old design (always a great favourite of ours) but does the seemingly impossible trick of both making the side-by-side cabin much roomier – it’s now as wide as the P2008’s – and being lighter in weight. Not an automotive-style ‘facelift’ but a real improvement on the old model.

Even more eye-catching was another AERO debutante, the Horten flying wing (or blended fuselage aircraft). Inspired by Dr Reimar Horton’s famous designs of the 1930s and 40s and developed by a new German company, Horten Aircraft GmbH, the composite two-seater has flown and – according to its test pilot – flown well.

The prototype came to Friedrichshafen under its own power, although with only six hours logged and some structural limitations still to be cleared, performance testing has yet to get under way. Predicted maximum speed on Rotax power is 150kt, ‘minimum speed’ is 47kt, the useful load 300kg and projected range an impressive 1,900nm.

AERO regulars have come to expect a box full of novelties from former Diamond proprietor and CEO Christian Dries. The Austrian company passed into Chinese ownership at the end of 2017, new CEO ‘Frank’ Zhang making a more conservative presentation to mark Diamond’s first appearance as part of the Wanfeng automotive group.

However, familiar faces – and designs – were very much in evidence, and it is clear that Wanfeng is keen to maintain Diamond’s large R & D team (100 of the 700 employees in Austria are engineers working on future projects – an impressive ratio).

One programme making a mild change in direction is the ‘Cirrus beater’ DA50, which it was announced will now be powered by the 300hp Continental CV300 diesel. First flight with the new engine was in March this year, and Frank Zhang says the aircraft will be on the market by the end of 2020.

Other new technology was to be found beneath the skin – or under the bonnet – of aircraft on display. A full report will appear in the May issue of Pilot, but in the meantime we noted several interesting electric and hybrid power units, among them an ostensibly standard Ikarus C42 ultralight that had its electric propulsion motor up front and a 35kW petrol engine hidden in the rear fuselage, driving a compact generator.

Storied Italian kitplane maker Alpi was exhibiting a Rotax-based hybrid power unit for a projected twin-engined (one power unit on each side) aeroplane.

By grafting on an electric motor to the propeller gearbox, Alpi has come up with a solution that combines Rotax fuel economy with big aero engine power for takeoff and climb, and the safety bonus of the electric unit continuing to produce substantial power should either of the piston-engines fail, potentially making their twin one of the safest available.