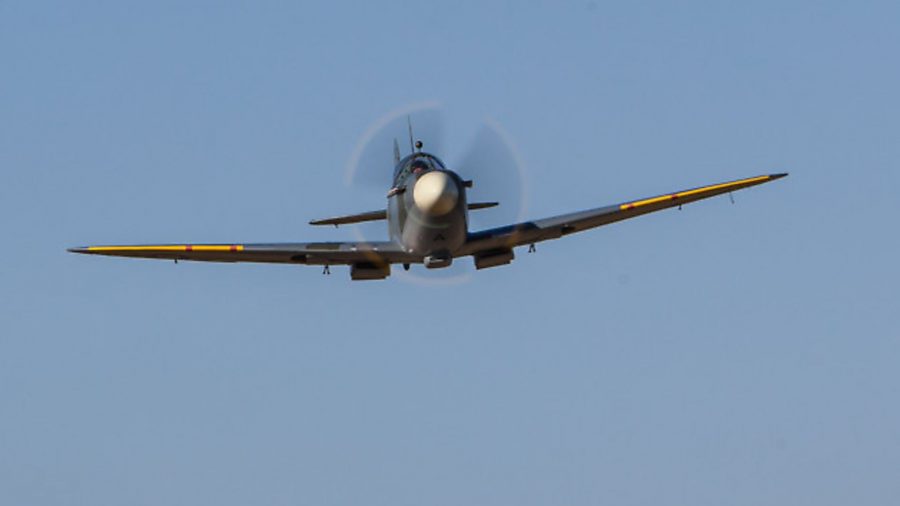 Pictured at Enstone on 25th Feb 2016, Supermarine Spitfire Mk.26B G-ENAA/EN130, coded ‘A’ which has been built by one of the Enstone Flying Club teams under the direction of Paul Fowler, who is aiming to establish the Oxford Squadron of these 90% scale replica Spitfires.

Each ‘team’ has twelve builders, plus other volunteers who assist the construction of this Cisco, Texas, US produced Spitfire kit. The kit was originally an 80% scale (still available but with a Jabiru 5500 engine) and designed by Australian Mike O’Sullivan – he moved his operation to Texas in 2010.

Several of the 80% scale Spitfires have been completed and flown in the UK, including David Bishop’s G-CEFC/RB142 which also hangared at Enstone.

This 90% version of the Spitfire is more realistic, particularly in the nose/engine area, now fitted with a General Motors V-6 Isuzu engine and a three-blade propeller.

This aircraft, the first of this model to be completed in the UK, flew on 30th October 2014 with test pilot Jez Cooke in control. Since then the aircraft has flown about 18 hours whilst the lengthy certification and testing programme has been carried out in conjunction with the LAA (Light Aircraft association) – Paul Fowler hopes that the LAA will grant the aircraft its full Permit to Fly (rather than a ‘test’ Permit) in the next couple of weeks with just an hour of flying required to complete this programme.

The Spitfire Mk26B is a 2-seater constructed almost entirely of metal and with an electrically operated retractable undercarriage – this aircraft was painted in an authentic scheme by Murray Flint. A second Mk.26B (known as ‘E’) is under construction at Enstone (IMG_7940) by a second group of builders, and Paul Fowler hopes that further builders will join this and other groups as the enterprise grows.

The second Spitfire Mk.26B should be engine running by Autumn 2016 and fly next year.