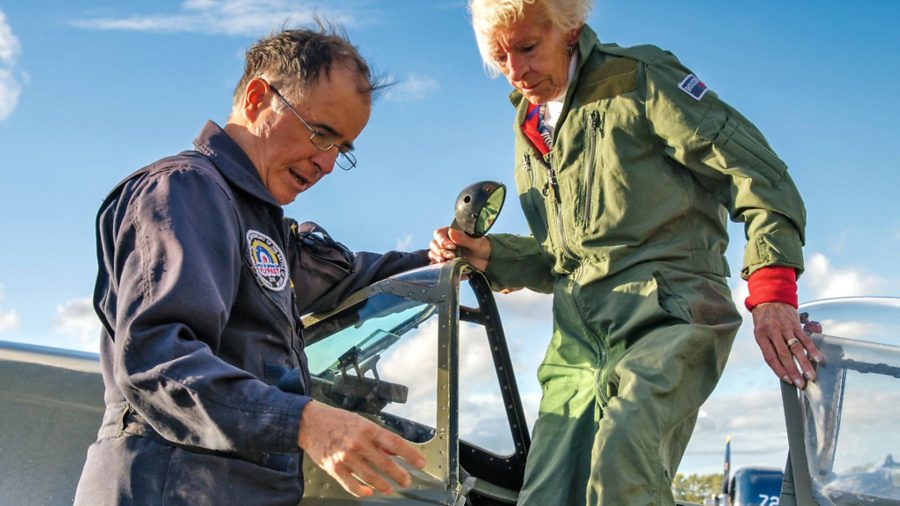 Following a campaign led by Isle of Wight residents and the local press, an earlier decision by the council has been reversed and Ellis was honoured at a ceremony on January 17

Mary Ellis, former member of the Air Transport Auxiliary, was given the Freedom of the Isle of Wight after councillors overwhelmingly voted for her to receive the accolade.

During the war Mary delivered 1,000 aircraft of 76 different types and we recently covered the moment she was reunited with a Spitfire she had ferried and signed 70 years earlier.

Ellis, who first learned to fly in 1938, delivered aircraft across the Solent to the RAF, a vital role in keeping the Isle of Wight and the rest of the country safe during WWII. She did this with only a compass, stopwatch and a map.

Ellis and her colleagues were trailblazers for female pilots in the RAF and after the war she went on to become Europe’s first female air commandant while she also established the Isle of Wight Aero Club.

Mary said: ‘I am very honoured to be given this award, although I have travelled extensively during my life, the island has always been home and is such a special place to me. Thank you for granting me the Freedom of this wonderful island.’

Leader of the council Dave Stewart said: ‘Mary is a national, international and Island heroine and she is quite simply most deserving of the Honorary Freedom of the Isle of Wight.

‘She is one of the last of the finest generation who did so much to guarantee our freedom 70 years ago.’

The award was only given after a lengthy campaign by Isle of Wight residents and local news site OnTheWight paid off as the council reversed a decision from November 2017.

You can see the video of Mary receiving the honour by clicking here.