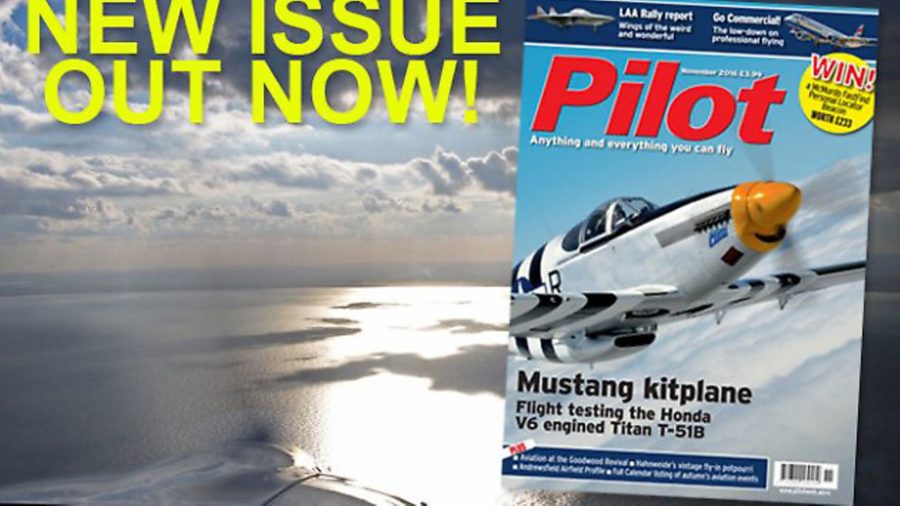 Editor Philip Whiteman gives his thoughts of the new issue, which features a report of the LAA rally, the low-down of commercial flying and a flight of the Titan Mustang

Flight Test of the Titan T-51B

Aviation at the Goodwood Revival

As much as anything, the Light Aircraft Association’s seventieth anniversary, marked at the LAA Rally at Sywell and the subject of Steve Slater’s ‘Open Cockpit’ column, is a celebration of seven decades of affordable flying.

Operating on Permits to Fly, homebuilts and most of the UK’s ‘non-EASA’ aircraft come under the LAA’s umbrella, allowing their owners to do all the maintenance and make approved modifications themselves.

In recent years, two of Pilot’s contributors, Nick Bloom and Colin Goodwin have built their own aircraft – the famous Currie Super Wot and RV-7, Dumbo.

While Bob Grimstead has not built an aircraft, he has done something close to it in the epic task of reassembling and covering his Fournier RF4D and – in recent months – the job of getting his LAA Permit Aeronca Champ back in the air. (Bob, of course, insists that the latter is a better aircraft than my own L-4H Cub, which is also operated on a Permit to Fly.)

‘Old Timers’ editor Peter March and Assistant Editor Judith Austin both fly classic Cessnas – a 172 and a 150 respectively – but these are EASA aircraft, which means operation on a Certificate of Airworthiness, with all the associated cost of professional maintenance and the burden of EASA regulation.

Sitting a few feet from each other in Pilot’s Wokingham office, Judith and I do the same kind of flying. However, due to EASA regulation that came into effect on 25 August (see last issue’s ‘Pilot Notes’), she now has to carry a personal locator beacon in her aircraft.

Thanks to the generosity of another syndicate member, at least Judith’s flying costs have not been raised by having to buy that PLB or the emergency locator transmitter otherwise required, but many other C of A aircraft owners are having to cough up to pay for this equipment which, it has to be said, is generally of no great use, if any use at all, in typical GA operations over our densely populated island.

EASA should have done a cost-benefit analysis of the PLB/ELT mandate before it was enshrined in law.

Certainly, having either of these devices on board might save the day if one went down in, say the Welsh mountains or some remote part of the Highlands of Scotland – and sensible folk always carried a PLB (and not an ELT, which goes down with the ship) when crossing long stretches of water.

However, for typical British circuit flying and cross-country trips, the things have no value to the pilot and represent an unnecessary additional cost, as the CAA sensibly recognised in the national exemption that expired on 25 August.

The trouble is that the greater the cost – the rate at which those notes are shredded – the fewer the days at sea or hours logged in the air.

I had personal reason a couple of months ago to be grateful for the way LAA Permit flying minimises the costs and maximises the flying hours, when the Cub lost all power and I had to force-land the thing at a grass strip that happened to be nearby.

This was not due to a mechanical failiure – I will explain, when I tell the story in a future edition – but the point is that currency and years of experience in farm strip operations paid off in me being able to glide in dead-stick and put the aeroplane down without a scratch.

Above all, flying safely is about being able to put in as many hours as possible.

The LAA has done a wonderful job in driving down costs, allowing ‘Permit pilots’ to maximise their time in the air. The story is not quite the same for club pilots and many C of A aircraft owners, who are finding their flying increasingly expensive and are doing less of it.

It really is time for the regulators – and EASA in particular – to put the brake on escalating requirements and fees, and pay attention to resolving true safety issues, not the least of these being lack of currency.