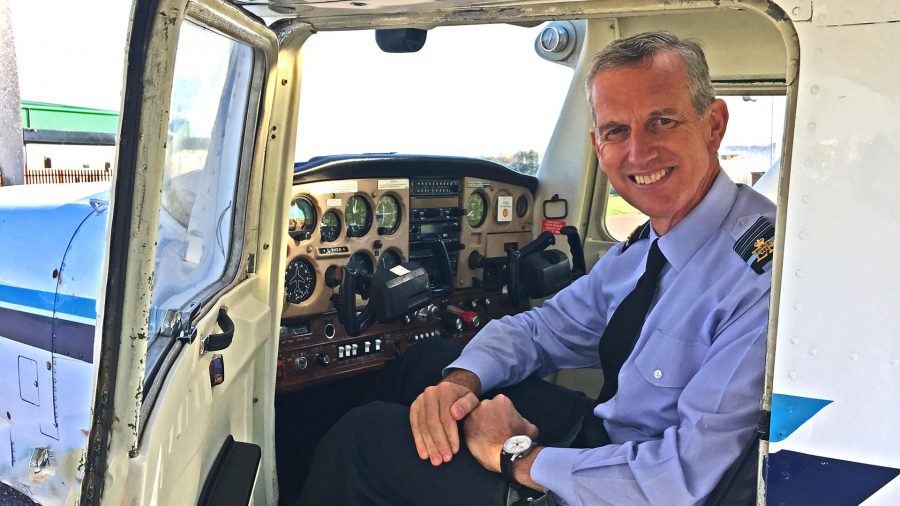 Pilot magazine’s Philip Whiteman and Eugenio Facci sit down for a Q & A session with the CAA’s new Chairman, Sir Stephen Hillier

We would have liked to have interviewed the CAA’s new boss closer to the time of his appointment last year, but both our and his plans were thwarted by the pandemic. However, now the situation is easing: the CAA has set up a GA Day for August and Sir Stephen is, he tells us, planning to go to the LAA Rally and a couple of the smaller airshows to get “a sense of the environment”. As part of his drive to re-engage he also found time to talk to Pilot and respond to our questions.

Q: What experience do you bring to your new position?
A: My foundation in aviation started when I was seventeen years old, when I was on a flying scholarship that I did at Leicestershire Aero Club, extending it into a PPL. I used that PPL as much as I could afford when I was back in Scotland and joined the Air Force when I was eighteen years old. So that’s where my aviation DNA is−in general aviation and the PPL.
I was selected to go straight from advanced training to become a flying instructor for my first tour and did three years. I became a frontline pilot on the Tornado in Germany and the UK, and was also an Instrument Rating examiner in that period. I flew in the First Gulf War and commanded a Tornado squadron. I commanded RAF Lossiemouth and became Air Officer, 2 Group, which gave me experience of large aircraft−Tristars, the VC10 and the like, as well as helicopters.
When I became Chief of Air Staff I wanted to remain current−which wasn’t the normal thing to do. I didn’t fly every day, but enough to maintain myself as a competent Tornado pilot and lead sections of the final Tornado fly-past around the UK in 2019.

Q: What was your motivation to join the CAA?
A: If I could just play a part in the aerospace endeavour through being Chair of the CAA, I felt I would be giving something back, in the way it had given to me… and I still love flying and will take every opportunity to do so.

Q: The decision to leave EASA, which counts non-EU countries like Switzerland amongst its members, had already been made when you were appointed – but, given the aircrew licensing and potential certification issues that have subsequently arisen, did you think it was a sensible move?
A: Our withdrawal from the EU made membership of EASA incompatible. That decision goes way back and my focus is
on what we do about it today. Through all of the great work that had been done by the team at the CAA there were no surprises, and we were ready for what happened on 1 January. There weren’t any immediate issues, and that reflected the level of prior preparation−as well as, frankly, the effects of lockdown on air traffic!

Q: The CAA has been busy in recent months in setting up multiple bilateral agreements with individual European states and a number of licensing problems have surfaced…
A: Clearly we are still working through a number of these issues and one I know will be in Pilot readers’ minds is making an EASA licence into a CAA licence. And we will in the future be further developing our bilateral agreement with the FAA that includes licensing.

Q: Has the CAA any plan to simplify pilot licensing, which has become almost impossibly convoluted and complex?
A: I am not involved in the detail of the debate on a day-to-day basis but we do need clarity and we do need consistency. I have spent a lot of time with our people in the Shared Services Centre and they are doing a really good job in the circumstances but I think we could make it simpler for them, and if we make it simpler for them, we make it simpler for the aviation community.
I have been surprised that a lot of [the CAA’s system] is not more digitised. Both from my perspective and the Board’s, we want to see a much more digitised operation as quickly as possible. However, we don’t want to rush and repeat what’s been a painful experience for all of us.” [Sir Stephen is of course referring to what you might call the CELLMA IT debacle, which has caused so much grief to pilots booking medicals and Aviation Medical Examiners alike – Ed.]
It has caused difficulties−we absolutely recognise that and we genuinely apologise for any inconvenience it has caused people. We are learning the lessons…

Q: One of the concerns that Pilot has picked up from the associations is over the specific level of experience and expertise within the combined CAA RPAS (Remotely Piloted Aerial Systems)/GA unit that oversees general aviation…
A: I was actually looking at this quite recently. The unit is part of the Safety and Airspace Regulatory Group−about 400 people−and I was amazed by the number that have a GA licence; a hundred. [Here Sir Stephen is counting both flying and engineering licences.] “I think that makes the CAA one of the largest repositories of general aviation experience in the country.
I am not saying we get it right every time, but we do learn from our mistakes−if things aren’t working out, tell us about it!
RPAS is going to take up an increasing proportion of airspace usage−we have 300,000 registered users already.” [A significant proportion of these must be aeromodellers and hobbyists, as all operators of models and drones of 250g and over are required to register−Ed.] “We need to be a CAA that is there for all airspace users, which is why we have combined the RPAS and GA units. We are trying to integrate RPAS with the rest of the community.

Q: On what basis might beyond-line of-sight (BVLOS) RPAS operations be acceptable to the CAA?
A: We need a detect and avoid system that assures us as the regulator that safety standards can be met. We are fundamentally an evidence-based organisation and will draw our conclusions from trials like the one that is going on at Goodwood.

Q: The government has stated that it wants to make the UK ‘the best place in the world for general aviation’. What is your interpretation of this aim and what role does he see for the CAA in realising it?
A: We’ve got to make it look like an exciting, vibrant forward-looking thing, where you can come to the UK and do things that are either not possible in other parts of the world or actually more difficult in other parts of the world. Now that we are a sovereign regulator… it gives us the chance to move more quickly and be more responsive.

Q: Could part of that involve deregulation? (The UK led the way with aviation medicals and the CAA’s evidence-based approach to easing medical requirements was instrumental in changing EASA’s stance.)
A: Definitely−regulation has a clear and important part to play but it constantly needs to be under review. We don’t want to be in a situation where ever more regulation is equated with greater safety−the primary responsibility for that lies with those delivering that activity. We don’t want to over-regulate and I want to make sure we delegate wherever it is appropriate to do so.

Q: Although the situation is now improving, the flying associations have been highly critical of the CAA’s approach to regulation and delegation of late, notably the contentious consultation on revision to BCAR airworthiness standards.
A: We are not on opposite sides−we are all part of the aviation enterprise and we all share a common interest in safe, effective and enjoyable flying in the UK and we all have a part to play. It’s the lot of a regulator that you are not always going to be popular but where we are doing things people are concerned about, we are going to engage and explain.

Over the coming months we will be seeing more of the CAA’s new Chairman. He is clearly a through-and-through aviator and has his roots in general aviation. With his hand on the controls there is, we hope, a renewed prospect of the CAA taking the right course.