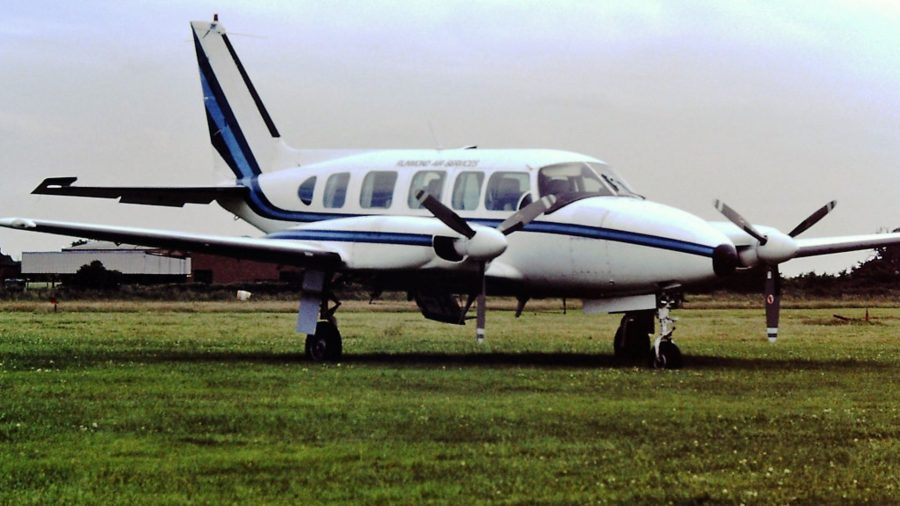 Operating alone means it’s all down to you, whatever is thrown at you | Words by Douglas Baillie 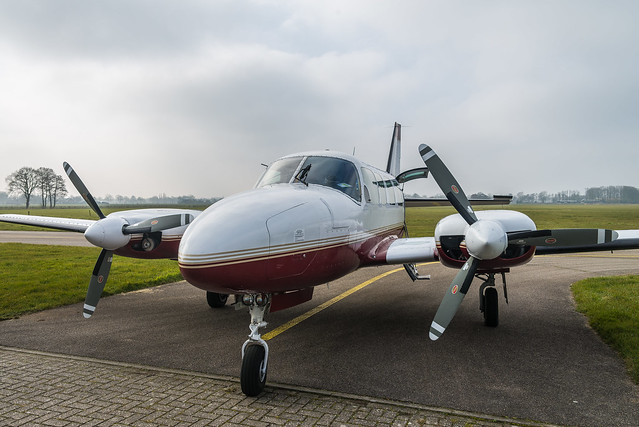 Being a single crew GA pilot flying light twins (mostly Navajos and Twin Caravans) in Western Europe can be both a challenging and rewarding experience. Lots of unexpected situations do happen, and being alone certainly focuses the mind and draws heavily on flying training and experience.

Everything from locating heavy oil drilling equipment, that was supposed to be in Zurich but was in fact in Amsterdam, to Revenue & Customs prisoner transfers, and from delivering a dozen wayward penguins to Dublin (where some escaped on to the apron and closed the airport), to experiencing engine malfunctions, partially lowered undercarriage, to give but a few examples.

What follows is a true event. Perhaps you can guess what happened. If not, I’ll tell you at the end.

It is 2200 hours in late January and I am in the Operations Room of the freight company at Aberdeen Airport filing my IFR flight plan to Edinburgh. I watch as the Piper Navajo Chieftain is loaded with mail bags in the nose locker, the two wing lockers, and in the fuselage. 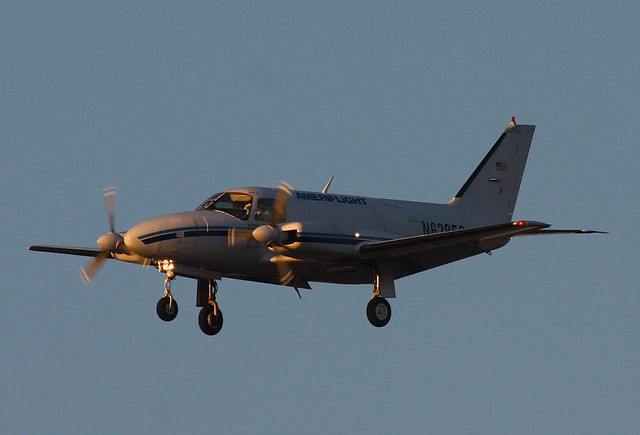 Once the bags are secured, there will be just enough room left for me to access the cockpit by squeezing along the floor from the rear door. The met forecast tells me that the freezing level is about 2,000 feet, and I might expect light to moderate icing en route, in otherwise still air.

I climb into the left-hand seat and am otherwise alone. Checks complete, I start both engines and everything is normal. I wait for the engines to warm in the cool air and request my clearance, which comes back exactly as expected. I read it back and ask for taxi clearance to the holding point.

Once there I carry out power, RPM and mag checks?all ok. Everything is normal?’in the green’. My first VOR frequencies and the ADF are set up and indentified. I select Mode C on the transponder squawk. I am cleared to enter and take off.

After lining up, I check the HSI is aligned for the runway heading and I gradually apply full power as the Chieftain accelerates briskly along the centre line, and I am climbing exactly as advertised in the performance tables towards the beacon. 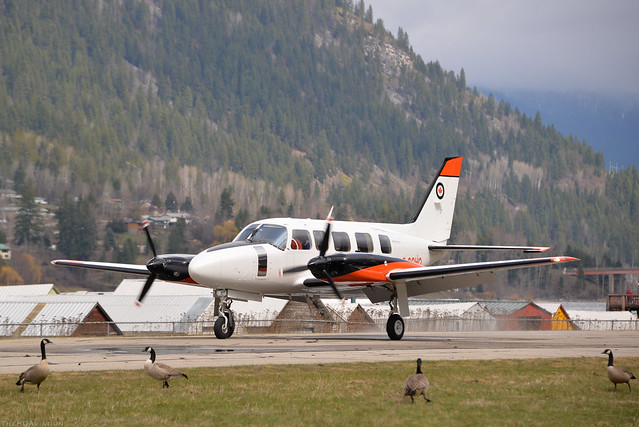 As I start to reduce power to cruise climb, the starboard engine begins to run very roughly and there is a pronounced yaw to starboard that needs quite a bit of rudder to keep the ball centred. What the hell…?

I am climbing through 3,000 feet in a right-hand, rate one turn, and almost on track to my next waypoint. Pushing both throttle levers fully forward results in full power from the port engine, and nothing from the starboard engine. I need more rudder to compensate. I level the wings and aim for the blue line on the ASI.

Aviate… Navigate… Communicate… The aircraft is still climbing well, I am on track, and I decide to return to Aberdeen. I make a Pan call on the Radar frequency, requesting radar vectors to the ILS.

Level at 4,000 feet now on a radar heading I try to work out what is going on. The red glow coming from the starboard engine exhaust that can normally be seen through the louvres on the cowling isn’t there any more. 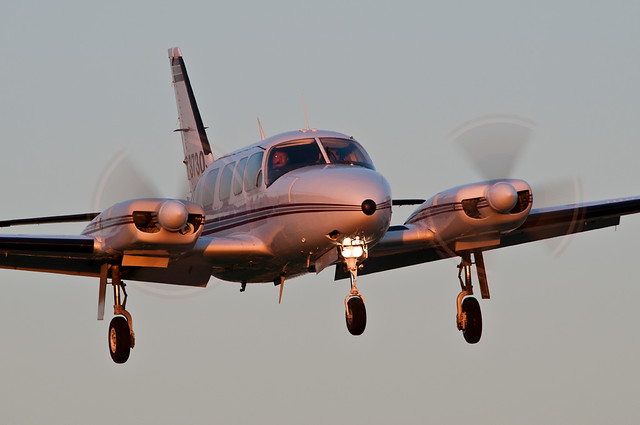 Feathering the starboard engine is now at the front of my mind. The turns to the ILS will be to the right, so I remember to make them gentle as they are toward the failed engine. I ask ATC for a wide and long approach.

I take a moment to re-check the fuel pressure, and the mags, and everything else from the memorised check list, and I find out that moving the throttle forward achieves nothing. The power is stuck at a lowly twenty inches, when it should be a lot more than thirty.

The EGT has fallen through the floor, the RPM responds normally?so the CSU is ok. Tentatively I start to pull back the mixture lever and the engine starts to run a bit more smoothly, and the EGT begins to rise somewhat. So I am getting some power from the engine and decide not to feather it. Better to have some power than none. But I still can get no more than twenty inches, no matter what I do.

All of this is interspersed with checking for ice via the light on the port wing leading edge. Thankfully there is none. 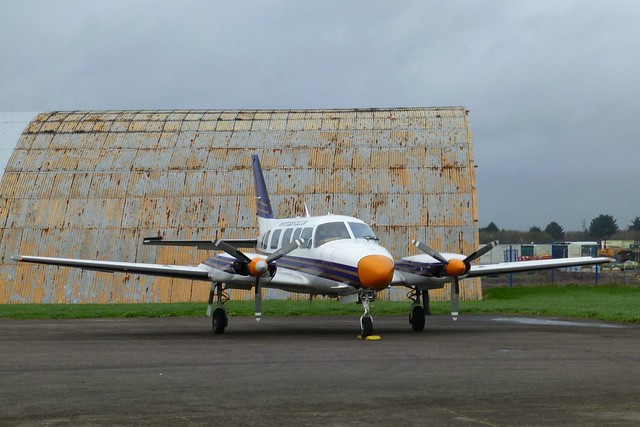 I am being given more vectors and altitude changes from the Aberdeen Radar controller?very reassuring. I select the ILS and ident it, and work out where I am geographically. Aberdeen Airport is to my right and behind me.

In the descent, I leave the starboard engine settings alone, and have decided that I will feather it if anything more changes for the worse. I control my rate of descent using only the port engine, and I have no difficulty joining the centre line and capturing the glide slope.

The cloudbase is now about 250 feet, with good visibility below. I use no flap because the runway is long enough, and I lower the undercarriage a little later than normal to reduce drag. Once three greens appear I check my rate of descent, and I reckon I have enough power to stay above the glide slope and initiate a go-around if necessary. I see the lights at 350 feet and I am just a little high on the VASIs.

The airport has lit up in a sea of blue flashing lights as the fire trucks and just about everyone else tends to my emergency?very reassuring.

I land normally and continue to taxi as assigned. At dispersal, I allow some time at idle and then close down both engines and wonder what on earth caused the starboard engine problem.

I found out from the engineers early the next morning. Did you work it out?

The turbocharger had seized and the rotors had frozen in such a position as to choke the air intake and reduce the air/fuel mixture to a massively over-rich scenario, which is why the EGT fell, and explains why the engine was so rough.

Leaning the mixture helped, but not enough to overcome the choke in the turbocharger.