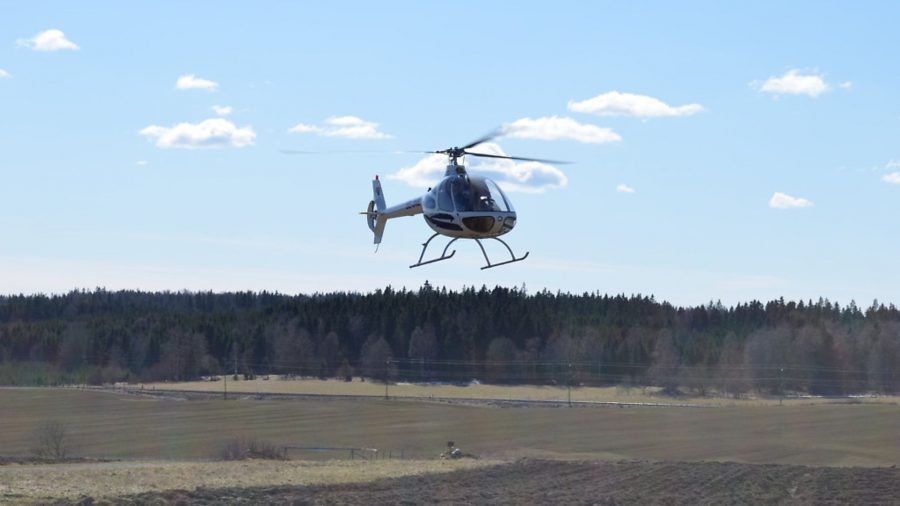 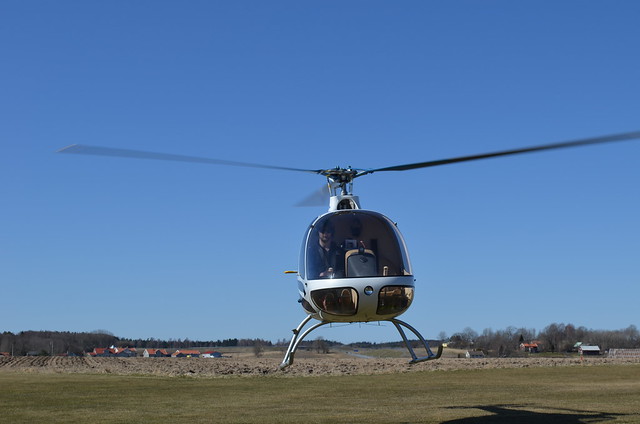 My friend Simon worked hard and finally got himself a new Cabri G2 helicopter, learned to fly it but then lost his medical. We shared a hangar and to help him out I said I would learn to fly the helicopter… how hard could it be?

Simon put me on to his school and instructor. Having flown for thirty years and even taught for a while I was confident I could do it in short order. I got on well with the school and my instructor who really tailored the course to suit me.

I progressed quickly and was soon very comfortable in it but I was irritated by having to navigate like I did when I got my PPL and I wasn’t very good at doing it, long-hand, old school. My technique for navigating without a GPS was to get a map, draw a line on it and fly there. I never got lost or ‘unsure of position’ and always arrived within a few minutes of when I thought I should.

This, my instructor said, was “gash” and I had to do it properly! I knew he was right so I borrowed a whizz-wheel and ruler protractor and started doing PLOGS. I also practised mental dead reckoning. I had ten or so hours to build doing solo navigation after going solo at twenty hours. 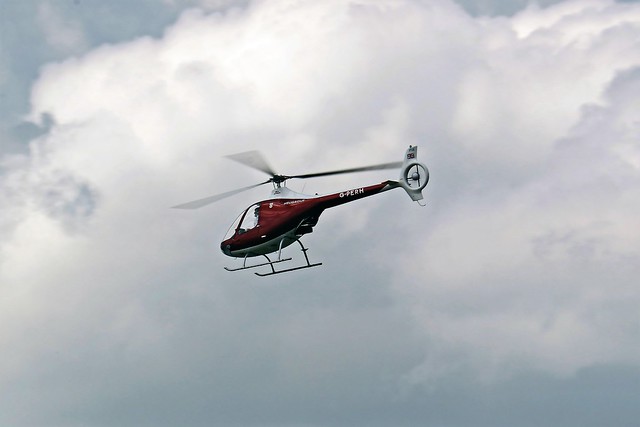 I flew four hours a week to get through the licence and found interesting routes to stay engaged. I wanted to check out a walk on the Isle of Wight and what better way than in a helicopter. I planned to fly from Kemble to Bembridge, then around the island and back to Kemble. Simples.

First leg, no issues. Round the island, can’t get that wrong. The leg back to Kemble started well but I found the wind was not as before, the course corrections were bigger, and my ground speed had dropped. The workload had just gone up a good chunk. To compensate I flew faster as I wanted to be spot on time to make a good impression.

Trying to be as accurate as possible I was head down in the cockpit a fair amount (yes, too much), and was just comfortable that I was right on track when I looked up to see a bird?and a big one at that?come through the windscreen!

It was a hell of a bang. I was thrown into the straps. It took my headset, hat and sunglasses off?I couldn’t see anything. I had ninety knots of wind in my face and the helicopter pitched all over the place for a couple of seconds. I couldn’t recognise the attitude so I autorotated it instantly thinking it had let go. 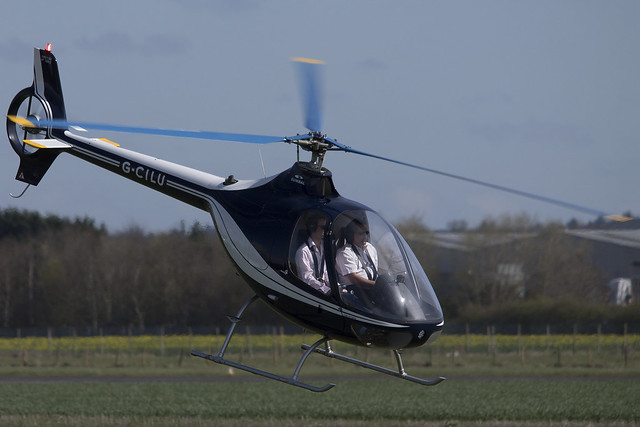 Seeing only a blur, I put the controls in a known position and aimed it into wind (it was on my left). Looking down at the transponder I found my sunglasses, a stroke of luck. Now I could see, I set 7777; I know it should have been 7700 but I had my hands full and no radio.

With the situation under some control, I corrected the rotor rpm and airspeed and aimed for a field. My choices were limited as I was on the edge of a very large wood. The field was huge and sloped away but there were no other options.

I looked around the cockpit to take stock. The canopy was largely missing, around 75% gone, and there was a big buzzard in the passenger footwell wrapped in the headset. Its wings were enormous. It was lying upside down with its head looking up at me. I was convinced it was dead.

I was only 1,000ft above the ground which gave me about thirty seconds of descent so I was in the field in no time (it seemed a lot longer), just in the flare coming to a stop when the bird came to?and it was not happy. It was thrashing about, trying to get back out the hole it came through. I was trying to touch down and this was an unwelcome distraction so deciding it didn’t need to be pretty I ran it on at 10-15 knots. We quickly came to a stop. 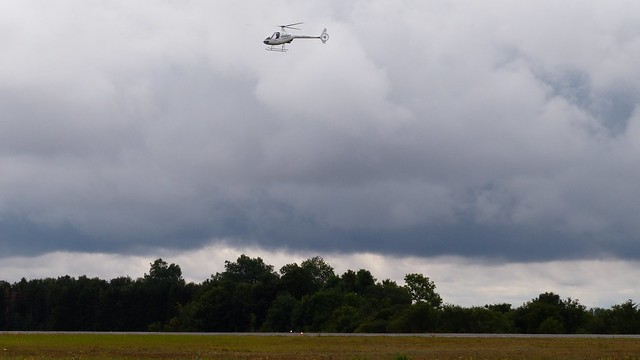 Now, an angry one-winged, one-legged buzzard in the cockpit of a small helicopter was much scarier than I ever imagined (actually I never had). It couldn’t get out the hole it came through so I reached over, shoved the door open and it scrambled out.

I thought “don’t disappear, no one is going to believe this, I need a photo!” I shut the helicopter down faster than ever before and then I could hear “G-ABCD… G-ABCD” coming from the headset on the floor. I retrieved it and replied, no answer, replied again, then someone came on frequency and relayed that I was down and safe.

I grabbed my phone and jumped out. The buzzard was sitting in front of the helicopter so at least I had some evidence. I worked out where I was and rang the school, then Simon to say I had dropped his pride and joy in a field!

He immediately asked if I was OK, not concerned about the helicopter at all (not sure I would have been so calm). An enormous tractor drove up and a well-dressed farmer jumped out, looked at me, the helicopter, and the bird and said “you’re going to need a gamekeeper”. What seemed like moments later, one appeared, with his kids?who’d never seen a helicopter before. 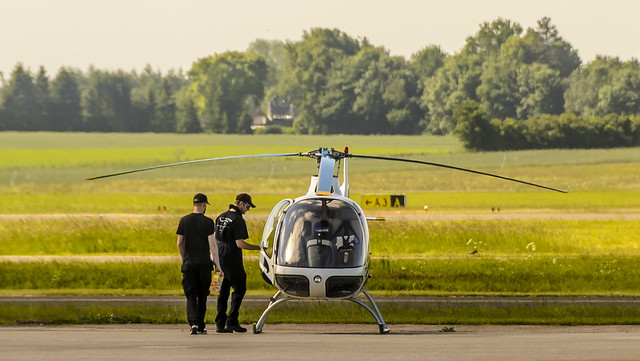 There was a lot to learn from this. The main lesson was it doesn’t matter how much you fly or how competent you are there is always, always something to learn. Being told you’re not as good at navigating as you thought you were might be hard to take, but suck it up, get your head down and learn it again. Don’t whinge.

And training is the key thing. My instructor said we would do so many autorotations I would be surprised if we didn’t do one every time we came back; indeed when he said land normally I really had to think about it. So when I had to do it for real it was completely automatic, almost an anticlimax. If you think your instructor is hammering a point home it’s probably for a good reason.

Finally, I can’t imagine any other helicopter protecting me so well. I’m sure it would have been a different story in anything else. I have had three bird strikes in a year: one unnoticed until I put the aircraft away, another of no consequence, and this one.

Sadly, Simon lost his battle with cancer earlier this year. I was able to fly him around a bit but not as much as we’d hoped. Now I have to find a way to earn enough money to buy a helicopter. Simon introduced me to a new passion, I will miss him enormously.