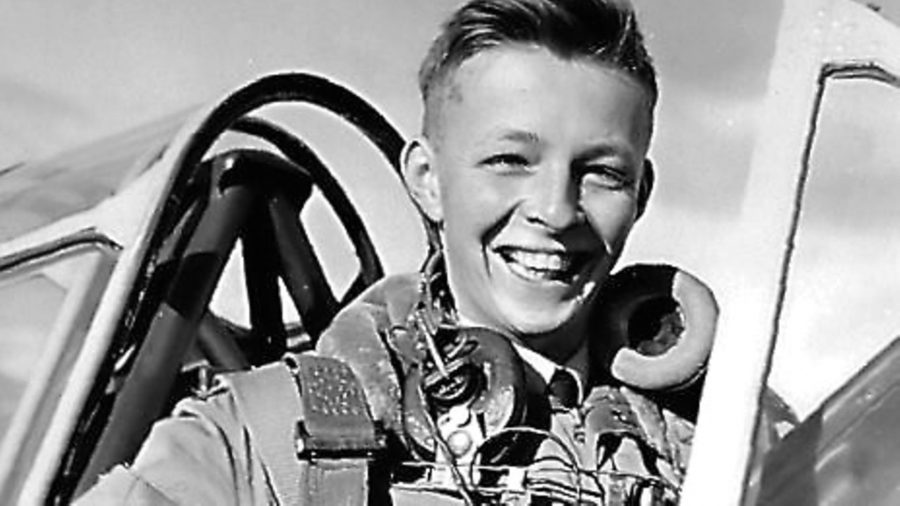 It all started when I lost my boots. I was 15. It was during the era of compulsory National Service, and at my school we were obliged to join the Cadet Force and don a uniform one afternoon a week. Until you were 15, it had to be an army uniform but once turned 16 you could choose. With the army’s khaki went a requirement to wear soldier’s boots, but with the RAF ordinary shoes were specified. So my solution to my footwear problem was obvious and immediate: choose the RAF and, bingo, problem gone.

Over the next year flying and all things aviation steadily invaded me. We had an air experience day in Chipmunks. I became engrossed, fascinated: I wanted to fly. Then, just after my 17th birthday I learned that the RAF was offering Flying Scholarships: for £100 of Air Ministry money I could learn to fly at a civilian flying club. I went to RAF Hornchurch to take the aptitude tests in the Christmas school holiday, and was thrilled when told I had passed and they would pay for me to get a PPL. That set the agenda for the next – and my final – school holidays. Daily I got the train and ferry to Gosport to be introduced to the Tiger Moth (no electrics, voice tube intercom, but I knew no better).

I soloed after a week, and after a further two weeks my log book says I was doing solo cross-country flights. And I was, I fear, quite horribly cocky! Then came the qualifying cross-country, landing away at two other airfields. I felt I had mastered navigation now: you got the wind details, plotted on the map, and worked out your flight plan. Thus you knew your ETA – just watch the time and the compass, and look for the destination when the watch told you it was time to do so. Off I set, destination Thruxton, and at the calculated time I searched the ground. But it didn’t correspond with the chart. Not at all.

Nothing like an airfield came into view. I started to get worried. Then I saw a grass airfield, and although it didn’t look exactly like the map, it seemed fairly close. Phew! It must be Thruxton, and my navigation must have been OK after all, just a few minutes out. I landed and switched off. Before I could get out of the cockpit I was approached by a uniformed army officer, who wanted to know what on earth I was doing. I said I thought this was Thruxton. “Thruxton?” he said, “That’s over there.” He pointed north-west. “This is Middle Wallop, and it’s an army base.”

He must have seen my extreme youth, for he very gently advised me to take off again before an MP escorted me to the guardroom. I did, resumed my original heading, duly found Thruxton, landed and pondered what could have happened.

It was very simple really. I had reversed the wind direction when I worked out my flight plan, so my calculations were for a tailwind when a headwind was forecast. The difference was large enough that I couldn’t imagine I was that far off what I believed was my position, and didn’t look widely enough at the chart. Careful recalculation of the next two legs – and this time checks of the passing terrain – allowed me to find Shoreham and then home to Gosport without further incident. My relief was short-lived, however. The trip took five hours, with three land-aways not two, and I was long overdue. I draw a veil over the subsequent interview with the CFI…

Fast forward 18 months: I had been accepted by the RAF as a National Serviceman and sent to Canada where predictable weather was a bonus for pilots with L-plates. I found myself in Alberta. We were doing our basic training on Harvards, not the most benign of mounts for novices. Those who had survived the course so far had soloed, done cross-countries, learned aerobatics and started on formation flying.

The day came round for my final navigation test. I had to fly a three-leg course with an examiner in the back seat. The first and last legs were to be at altitudes of 3,000ft, with the middle leg at 200ft AGL. Canadian prairies, stretching 1,000 miles up to the Rockies, don’t have all that many features to fix on. Even most of the roads are laid out on a grid, so telling one north-south road from the next can be tricky. I took off, found the first turning point alright, dropped down to the required 200ft, and set my new heading.

Well, the prairies may seem flat, but in fact there are plenty of low-rise hills. I decided I would iron out the undulations. If I was at 200ft, and there was a small hill coming up that I could see over, I just maintained my altitude. Sometimes the ground was, I have to admit, a bit close, but there was never any danger; nor was there a squeak from the examiner in the back. Navigating near the ground at 130 knots needs acute observation, but the huge silos used to store grain nearly always bore their location name in large letters. With a fair slice of luck, I found the next turning point, climbed back to altitude, found base and landed. I thought I had done all right.

Then came the de-brief and assessment. I was confronted by a stony-faced examiner. Stage by stage, he clinically went over the flight. The low-level leg was to be at 200ft AGL all the way. But here I had been at 300ft here, and here 100ft, and here he reckoned I cleared the hill-top by 25ft. Because I was too low I had missed landmarks. Every transgression meant marks deducted. I was quaking: had I failed this essential test? Would I get the chop?

Then, massive relief. With all my transgressions accounted for, he told me I just scraped over pass-mark. Phew again! What did I learn? First, that rules and procedures have a purpose: don’t muck around with them. Secondly, in all things flying, and not just navigation, check and check again. And never get cocky!

Be published in Pilot!

Do you have your own ILAFFT tale? Tell us your story in around 1,000 words and you could see it in print. Contact the editor at philip.whiteman@archant.co.uk.