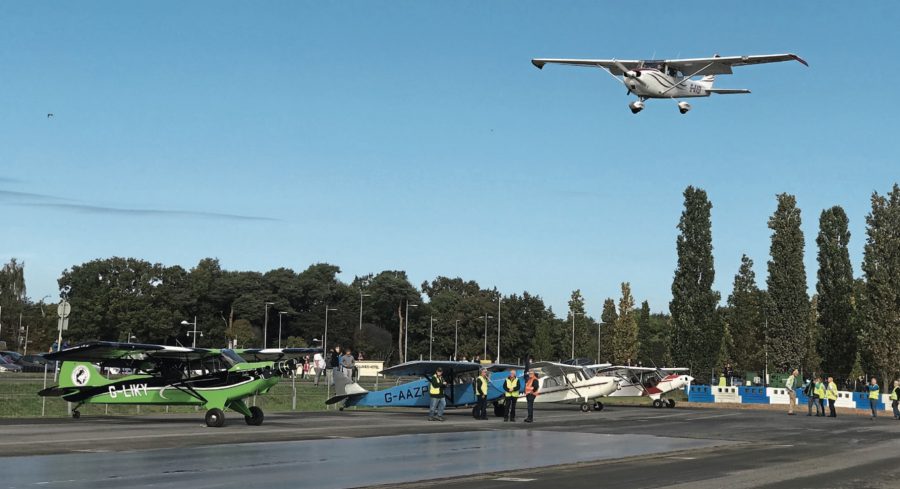 ABOVE: For the first time in eighteen years, aircraft were allowed to land on the original hard runway at Brooklands

In perfect weather, exactly one month ago (on Sunday 16 October), a select group of aviators enjoyed a small, by invitation only, fly-in at the historic Brooklands Aerodrome, near Weybridge in Surrey. Five aeroplanes and two helicopters took part, and our very own Bob Grimstead was told this was the first time any aircraft had used the original hard runway for eighteen years. Just 420 metres of it is now available.

Brooklands is known as ‘the cradle of British aviation’, and was not only a hotbed of flying activity before WWI, but incorporated the world’s first banked motor racing circuit. By 1918 it had become Britain’s largest aircraft manufacturing centre, with training and test flying by Avro, Blériot, Bristol, Martinsyde, Sopwith and Vickers. The Hawker Hurricane’s first flight took place here on 6 November 1935.

Post-war, Brooklands became the final assembly and first-flight airfield for aircraft made by Vickers-Armstrongs Ltd, and later the British Aircraft Corporation, right up to and including the Valiant bomber and massive Super VC10 airliner. The last such flight took place in 1972, while the BAe Brooklands factory eventually closed on 29 July 1986.

Following the success of this modest fly-in, four ‘aviation days’ at Brooklands are now planned for 2023. Pilot will promulgate the details of these events as soon as we have them.