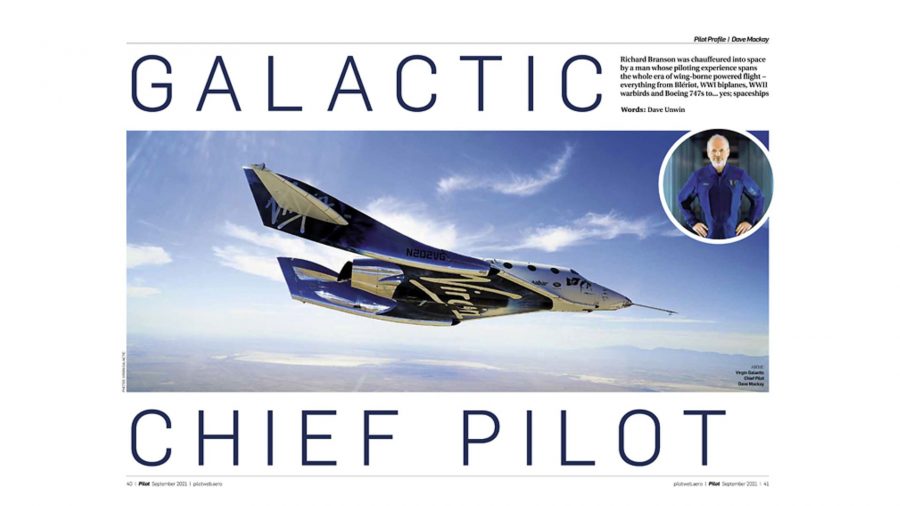 Most readers will know Dan Dare, the space adventurer of Eagle comic fame, and he is referred to as an inspiring figure in Dave Unwin’s excellent profile of Virgin Galactic Chief Pilot Dave Mackay, published in the September edition of Pilot magazine, on sale from Wednesday 18 August

Virgin Galactic and its founder, Sir Richard Branson have been the subject of a certain amount of derision in the press at large, some of it possibly self-induced through giving the company an ambitious name at such odds with the mission finally accomplished on 11 July.

On that day Mackay and co-pilot Michael Masucci took Branson and his fellow passengers on a sub-orbital flight, not up as far as the internationally-recognised Kármán line that defines the limit of the atmosphere (62 miles or just over 327,000ft) but nevertheless reaching 280,000ft – well into NASA and the USAF’s definition of ‘space’ (above fifty miles or 264,000ft).

As Pilot’s Profile reveals, Virgin Galactic joyriders (to use the fine traditional term) will get an unforgettable view of Earth, and if NASA and the USAF deem them astronauts, it’s good enough for us.

Virgin Galactic space ships are true aircraft
Branson’s spaceships are true aircraft – their ascent and descent are wing-borne – and they are flown by real and wholly admirable pilots. There’s more than an element of Tom Wolfe’s ‘The Right Stuff’ in the whole endeavour too: before substituting capsules for warheads on ICBMs (inter-continental ballistic missiles) became in the early 1960s the expedient means of putting men into space, the USAF had come up with its Dyna-Soar concept – an aircraft like the Space Shuttle and SpaceShipTwo.

The Dyna-Soar programme was cancelled but the Air Force and NASA continued to experiment with lifting bodies and the air-launched X-15, now recognised as the first spaceplane after Joe Walker flew it above the Kármán Line on two occasions, on 22 August 1963 setting an altitude record of 354,000ft.

Thus, Virgin Galactic’s crews and passengers continue a noble tradition – but what about former Amazon CEO Jeff Bezos’s much-publicised trip into space on board his Blue Origin company’s New Shepard 4 rocket? Certainly, no small measure of bravery was involved – for all of its failsafe and back-up systems the thing remains a potential bomb, and just think for moment of the consequences of a window blowing out at apogee – but New Shepard’s flight is entirely automated: it is the spaceflight equivalent of a drone, motoring’s equivalent of a driverless car; the world’s most expensive fairground ride.

Rather unfortunately, for all of its excellent engineering and functionality, it also looks like a giant… Well, the Twitterati and YouTube comedians have had a field day in making and circulating mash-ups of the launch of Austin Powers movie villain Dr Evil’s phallic lunar rocket.

If you are still struggling to see what any of this has to do with GA, here’s one last thought. Virgin Galactic’s ‘SpaceShips’ (we’d call them spaceplanes) are the ultimate expression of the US homebuilt aircraft movement, being conceived by designer Burt Rutan and developed by the company he founded, Scaled Composites.