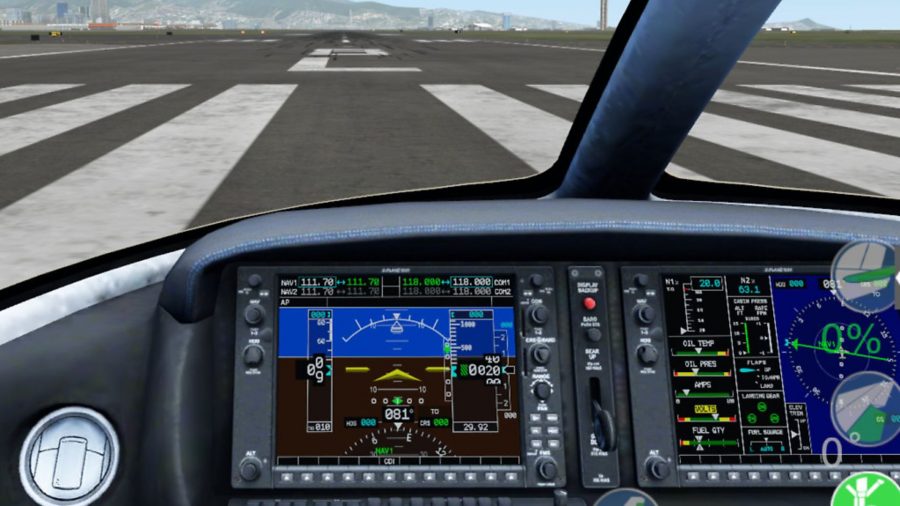 Housebound, isolated, and wanting to fly? The phone is the limit! All you need to fly from home is a phone, X-Plane Mobile, and an internet connection

For this first flight simulator review of ‘The Isolated Aviator’, we took the example of a very isolated pilot – your assistant editor. Caught by surprise by the lockdown, with no joystick at home (my father “borrowed” it) and no prospect of getting anything delivered, I only had my iPhone 6s Plus and an internet connection in order to “fly”. It turns out, you can actually get a very good flight sim experience, even in these conditions.

For this review, I downloaded X-Plane Mobile.

The sim relies on your phone motion detectors, turning the phone into a control column. Tilt forward and backward for pitch, and right/left for turning (there’s a finger-controller rudder, more on that later). The other main controls are operated by touching the right and left side of the screen (respectively to control flaps and gear, and power and brakes).

In the free version there are two types of aircraft you can fly, the Cessna 172SP and the Cirrus SF50 Vision Jet. Many more types, however, are available at prices between £0.99 and £5.99 each (among them many popular airliners like the A320 or the B777, but also some gems like the Piper Cub and the A-10 Thunderbolt).

If you are stuck at home and are not familiar with flight simulators, you may actually be astonished by the realism that you can get from this little thing that many of us still call a ‘phone’. The scenery is quite stunning and fairly realistic for VFR flying, although it is limited to Austria, Washington State and Hawaii in the free version. And the cockpit features are basically just like the real aeroplane. The Cirrus Vision Jet, for instance, features the exact same Garmin 1000 displays that I found in DA42 Twinstars while training for my ME rating. The realism and fun is increased by the endless weather combination that you can set up, with practically everything under your control: winds, cloud cover, cloud type, visibility, time of day/night, turbulence and indeed thermals.

After getting familiar with the main features of the sim, I set up my Cirrus Vision Jet on Runway 08L at Honolulu International Airport, planning for a flight that would include the two things for which I find simulators most useful: instrument training and emergencies.

On takeoff I need to use a tiny bit of tilting right and left to keep centred (a small issue here, but a bigger one on prop planes as I discuss later). I rotate at 90kt, and once gear and flaps are up the Vision Jet climbs at 160kt with about 8 degrees nose up. That yields a 1,500fpm climb rate in ISA conditions and near Maximum Take Off Weight, which I’m told is pretty realistic from pilots who have flown the actual aircraft (I’ve never flown a real one). Turning to the southwest for some general handling, I level off at 4,000ft, where 70% N1 gives me a IAS of 200kt. A few steep turns confirm the realism of the flight simulation. More bank requires more pitch up to maintain altitude and more power to maintain speed, and precise flying requires quite a degree of concentration. Slow flight is also quite realistic, with the controls becoming markedly more sluggish below 110kt.

I then set myself up for a ILS approach to Runway 08L. Here the small screen of the smartphone is a problem, since looking simultaneously at the PFD and the navigation display forces you to look at the cockpit from a slight angle and not straight (more on this later). However, the simulation is very realistic and it is very useful training to improve your instrument scan.

I break visual at 300ft agl and go around to practice, as I had promised myself, an abnormal scenario. Having recently read Charlie Huke’s column on how to deal with a stuck power lever (see the Spring 2020 issue of Pilot), I decide to give that a try. With the lever ‘stuck’ at quite a high setting, I practice one of the three strategies discussed by Charlie. I pull up to slow below VFE, once in the speed range I lower gear and full flaps, and approach the runway descending at about 105kt IAS. I set on that speed (about 20kt above final approach speed) since I want to avoid sinking like a brick once I turn off the engine. It turns out this is where a simulator can teach more than a thousand words about an abnormal scenario. Once I’m positioned for a landing at about 200ft agl, in fact, I turn off the engine and lower the nose to maintain 105kt, with the intention to bleed off the extra energy in a smooth flare. But, as it turns out, it is not that easy to trade off excess speed for rate of descent, at least in this aircraft and configuration, and I end up touching down hard. A very useful lesson, priceless in the simulator, quite costly if I had been in the real aircraft.

There are only two limitations in X-Plane Mobile that I think readers should be aware of, but both of them are inevitable consequences of the high realism of the sim. First, without a proper rudder and with very realistic flight forces at work, takeoffs with propeller aeroplanes become virtually impossible. You can control the rudder sliding your finger on the screen, but my gut feeling is that it is probably best not to use it at all if you do not want to forget using pedals once you are back on a real aeroplane. This is a limitation for one of the two free aircraft on offer, the Cessna 172, where on takeoff quite a lot of rudder is needed because of the propeller. Obviously, this also reduces the realism of landings and takeoffs (with any aeroplane) with a strong crosswind, and of asymmetric multi-engine flying.

The second limitation derives from having sophisticated, realistic cockpits on a small screen. That means that, in order to turn the various knobs – say to change a frequency or use the autopilot – you need to zoom in on specific areas of the cockpit. That will result in some untidy flying, unless you pause the simulation or use the autopilot suitably, which does not seem to be always possible.

In general, however, these limitations pale in comparison to the amazing flying that X-Plane Mobile allows you to do. On one end of the spectrum, you can just have a bit of fun, if you want. On the other end, you can do proper, in-depth flight training that will come very useful next time you are in a real aeroplane. And all this comes for free, or for a small price if you want more aircraft models. So, while the Covid-19 pandemic may force you to look up longingly at the sky, you should also know that that little thing we call “phone” can also get you up into the clouds. And it will be quite a ride.