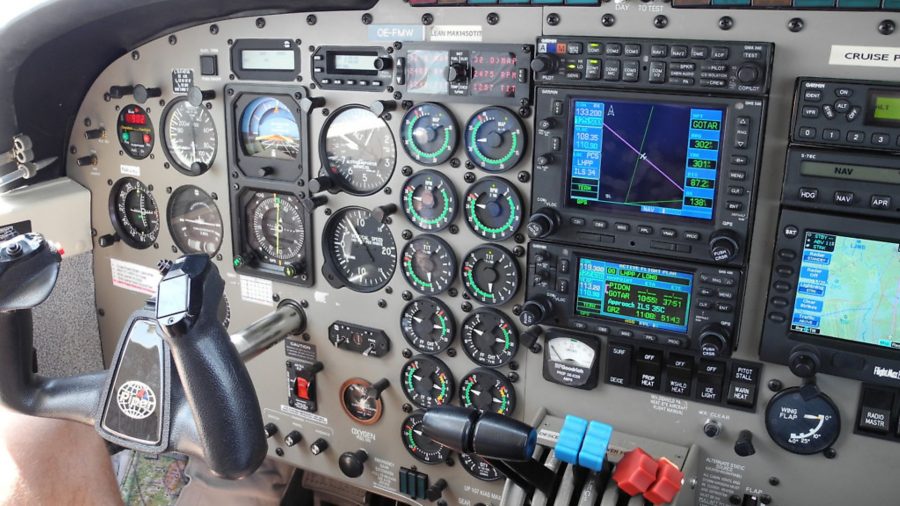 In the third and final part of this series we look at where the technology goes from here | Words: Philip Whiteman

In the first two parts of this series we explained how electronic conspicuity (EC) works, and attempted to establish and show in one simple table which system could see which (‘I see you…’, Pilot, August). The trouble is that the technology is moving so fast, and there are so many developments in the pipeline that our table is already out of date.

Partly because of patent protection enjoyed by one of the leading providers, it would appear that many current EC modules simply output data on what is there?or at least what the particular system/systems on board is/are able to ‘see’?without filtering the information to identify the aircraft that are a potential collision hazard. And while there is an obvious danger in any EC system that shows a limited picture actual traffic, even passive display of the information may actually pose a risk in its own right.

“The American NTSB, the Australian Transport Safety Bureau, several aviation authorities and research studies have all concluded that the see¬and¬avoid principle cannot be relied upon without a collision avoidance function, and recommend such systems to be installed in GA aircraft,” says Daniel Hoffmann of FLARM. “Seeing nearby aircraft on a display without collision warnings can actually decrease safety.

First, it will force the pilot to continually scan the traffic display instead of looking out and flying the aircraft… [and] second, it will give a false sense of safety, since if the display does not show any aircraft, one will be under the impression that there is nobody there, when in fact it is only because of the limited equipage levels of some systems.

“And here it is important to note not only how many different types of systems you can see and be seen by, but the actual number of those systems in the air. For example, more than half of all GA aircraft in Europe already have FLARM, but ADS¬B Out is virtually non¬existent below FL100.

“The consequences reinforce each other negatively; the pilot looks at the display instead of looking out, but the display might not even show most of the traffic.”

How SkyDemon does it

Working in conjunction with units such as PilotAware, SkyDemon’s hugely popular nav app constitutes one EC system that?like FLARM?does actually distinguish threats among the traffic detected. How does it do it? “SkyDemon uses industry standard TCAS algorithms and tailors the workings to be suitable for GA usage. When SkyDemon is connected to a traffic receiver such as a SkyEcho or PilotAware it does its own collision avoidance calculations and warns the user of a forthcoming proximity event,” says SkyDemon’s Tim Dawson.

The nature and presentation of those warnings are of course critical to how effective any alert may be. A synthesised voice in the headphones saying something like, say “traffic, eleven o’clock, four hundred feet below, two miles” is one thing, a screen full of uncategorised contacts is quite another?and what about the suggestion that an EC system could distract a pilot from his normal lookout?

“We designed the SkyDemon ‘traffic radar’ interface to be very simple,” says Tim. “The idea is that the user never normally needs to look at it, though they can include a quick glance in their scan if they wish. If a traffic threat is detected, SkyDemon makes a loud noise and the user’s attention is drawn to the screen. They instantly see a bright red ‘ray’ in the radar pointing towards the target so they can get their eyes outside looking for it in a minimum of time.”

“The future of EC is bright, and when we reach a critical threshold where lots of traffic is conspicuous, we plan to further develop our traffic monitoring to offer a service a little like a LARS, only using synthesised speech and with no need for a ground¬based controller. Any traffic coming remotely close to your own path could be read out to you, even if it’s not a collision threat. It’s too early to develop this now, but it won’t be long.”

It’s not just PilotAware that SkyDemon has been collaborating with. “A wide variety of detection devices can talk to SkyDemon. We originally worked with PowerFLARM but over time have added support for the GDL90 protocol since that is an established standard, and the market already had a lot of these devices well established in the USA, just waiting for Europe to catch up.

“In a nutshell, if the device connects to a tablet by WiFi, has built in GPS and a barometer, and uses the GDL90 or FLARM protocols, SkyDemon will probably visualise its output.

As well as PilotAware, our customers use devices like the SkyEcho, Stratux, iLevil, and more?new devices are in production all the time, it seems!”

But what technology will they be based on? There are those who think the choice of ADS¬B for EC is flawed?What does Rob Hart of SkyDemon see as the way forward with electronic conspicuity in GA?

“It is actually pretty clear: the situation right now is a bit like a snowball that started rolling down a hill four years ago, and simply can’t be stopped at this point. The market is already making its decisions about protocols, and device manufacturers are engaging in meaningful competition with one another to deliver the hardware to specific subsets of pilots who have specific needs.”

Keith Vinning of PilotAware echoes Hart’s thoughts: “There is an age¬old expression in telecommunications development, that ‘you must take your baggage with you’! This means that you cannot abandon what exists just because something new comes along. The same is the case with introducing new avionics.

“The developers of PilotAware know this well and do just that. This is why PilotAware utilises as much of a customer’s existing products as possible. For example, PilotAware Rosetta is designed so that it uses existing tablets, smartphones and other available smart devices as a visual display. This is done using WiFi or wired RS232 interfaces as appropriate. PilotAware Rosetta can be used with most electronic ‘flight bags’ and also panel EFIS such as Dynon, MGL, Naviter etc. For those pilots on a budget, Rosetta will provide the PilotAware RADAR screen on most Apple or Android devices at no extra cost to the user with no flight bag required. PilotAware interfaces with Foreflight, EasyVFR, SkyDemon, RunwayHD, Airnav Pro and AirMate applications.”

But the effectiveness of EC is not just about the technology: “The next step will be the social factor, where pilots will come under pressure to make themselves conspicuous not from the CAA and NATS, but rather from their clubmates,” concludes Rob Hart. “Ultimately, flying responsibly will mean having some kind of EC, and when the price is so reasonable it becomes a no¬brainer.”

Erratum: under the ‘Different standards & technologies’ heading in Part 2 (‘Tech Log’, Pilot, August) we stated that there were 2,000 FLARM¬equipped aircraft in the UK. FLARM’s Daniel Hoffmann tells us the actual number is 7,000 – and across Europe and around the world there are 35,000.

Working in conjunction with the company’s app, sky[nav]pro’s portable RedLine device is an ADS-B and FLARM receiver that in future will also ‘see’ Mode A/C/S transmissions. The box can be permanently installed in any GA aircraft as a minor change/modification in cooperation with sky[nav]pro’s avionics workshop.

“The RedLine combines multiple communication technologies to transmit live weather, tracking and monitoring data, SOS and text messages and lots more in one small box,” says Manager, Aviation Solutions Marwin D Knoblauch. “All data can be displayed and managed in our sky[nav]pro app (for navigating and conducting a flight) or the flight planning and briefing portal fly.skynavpro.aero Information can also be transmitted via WiFi to the crew’s tablets or smartphones.”

The traffic information received via ADS-B and FLARM from surrounding aircraft is processed in the RedLine box and then transmitted to panel display devices or a tablet. Using the sky[nav]pro app, traffic can be displayed passively with data relative to the user’s position (altitude difference and distance to target).

If a prospective near miss or similar dangerous situation is detected, a traffic alert is automatically generated. The alert overlays the navigation display and advises distance, direction and relative altitude of the related traffic target.

Using GDL-90 protocol, the traffic but also weather data stream can be integrated into third-party solutions like SkyDemon.

One of the few low-cost CAP1931 EC devices available, uAvionix’s SkyEcho 2 has enhanced capabilities not mentioned in Part 2 of this series (Pilot, August). Sky Echo 2’s ‘Out’ function is seen by any device with an ADS-B receiver – including portable receivers like PAW and PowerFLARM, and many TAS and TCAS systems. “ATC will also see SkyEcho 2, says uAvionix’s Christian Ramsey, “as it has a TSO C199 SIL=1 GPS”.

CAP1391 doesn’t specify the ‘In’ functionality – the new CAA ‘industry standard’ simply defines a class of device that is Out-only. It is left to the manufacturer to determine the in capability. “SkyEcho 2 will not only see ADS-B In aircraft, but also proximity alerts for Mode C/S aircraft, and – with an additional adapter – PilotAware and FLARM,” adds Ramsey.

Mindful of possible ADS-B spectrum congestion, the CAA is looking at alternatives to the current form, such as low power and lower transmit rates, which vastly increase the spectrum capability. “CAP1391 is the first example of this, with a maximum power of forty Watts, whereas the ADS-B standard has a minimum power of seventy with typical installations at two hundred-plus,” observes Christian Ramsey.

While the previous articles (‘Tech Log’, July and August) were centred on the low-cost EC unit envisaged by the CAA, Andy Davis of Trig warns that we were missing an important aspect by ignoring TCAS and other active traffic systems.

“I’ve had the (expensive) pleasure of doing some training in a modern Diamond aircraft in recent weeks, and it has an active traffic system – it’s not that unusual nowadays… If you want to be seen by all the TCAS II, TCAS I, and TAS systems the only solution is to fit a transponder.”