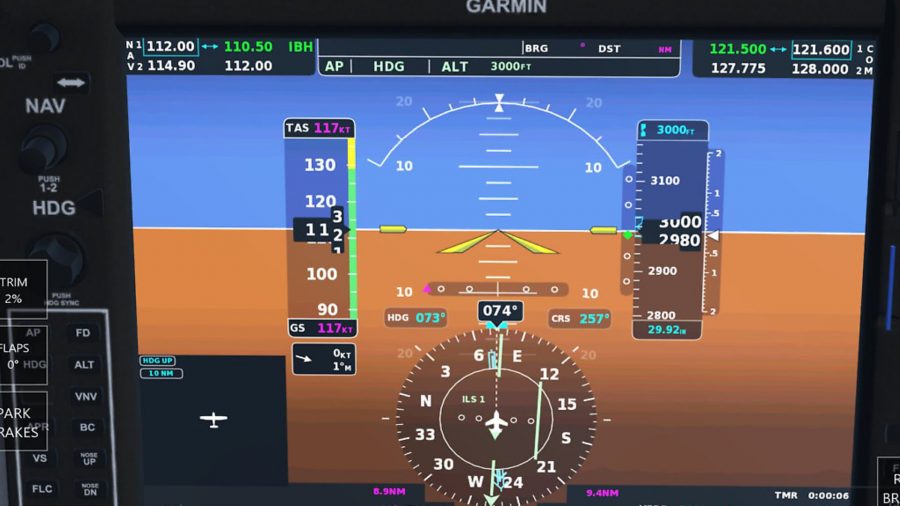 With ATC and many aircraft models, Infinite Flight is good for fun flying and to practice workload management

“Bournemouth Tower, N505MU left downwind Runway 08, touch and go”. “N505MU you are number 3 in the circuit, report turning base”. I slow down to 80kt, lower the flaps to ten degrees and look out on my left for an XCub that I’m following. It’s a sunny spring afternoon with a brisk south-easterly and I’m flying circuits at Bournemouth airport with three other aircraft.

Brakes Off, Fuel Sufficient, Engine instruments Check, Seatbelts Secured. I need to extend downwind before turning base because the Cub is quite slow – I’m in a Cessna 172. But at the same time, I’m followed by a Spitfire (yes, a Spitfire), so I don’t want to slow him down either.

“N505MU, Bournemouth Tower, speed 100kt if possible”. I knew it! Flap up, power up, and I keep looking out for traffic. It has been years that I have not been flying circuits so intensively, and I have to concentrate and work quite hard. When I turn on final (a long final, it turns out) I initially keep my speed up to help the Spitfire behind me, eventually touching down a bit heavy after a prolonged battle with a crosswind.

As far as pyjama flying goes, this is actually pretty intense. The Infinite Flight simulator that we have chosen for this month’s ‘Isolated Aviator’ is touted by sim enthusiast exactly for the two features that today I found most striking. First, the sheer variety of aircraft models that you can fly – and that will fly around you. Second, the possibility to be guided by an actual Air Traffic Controller (they are volunteers who passed a specific test), surrounded by aircraft flown by other users.

I try Infinite Flight by downloading it on my iPhone from the App Store (it costs £4.99). Like other smartphone simulators, the sim works by using your phone motion detectors, which effectively turn the phone into a control column – tilt forward and backward for pitch, and right/left for turning. On the left side of the screen you have the power lever, the flaps, the trim and the parking brake. On the right, you can control rudder and toe brakes through a virtual pedal that is controlled by sliding your thumb right and left. A host of other systems (lights, navigation instruments, mixture and so forth) are accessed through a drop-down menu.

One of the main attractive features of Infinite Flight, I find, is the fun that you can have experimenting with all kinds of different aeroplanes. For instance, you can fly pretty much all the main airliners, including some rarely found ones like the Dash-8 Q400, the Embraer series, and the Bombardier CRJ series. There are a few interesting GA aircraft (eg the Cirrus SR22 and the XCub, a derivative of the Piper Cub), two historic aircraft (the Spitfire and the P-38) and, finally, quite a variety of fighter aeroplanes. You can fly the latest military technology with the F-22, or choose something a little more seasoned like the F-18 or the F-14 – but don’t do ‘smartphone loops’ while making porridge.

Another interesting point of Infinite Flight is that it features a global scenery (you will need to pay a subscription for this though, the free version is limited to a few areas). This is interesting if you want to fly in exotic places, or if you want to practice a navigation flight before you fly it in real life (keep in mind that the scenery is streamed from the web, so it does not weigh on your phone storage space). While the scenery is global, the level of detail is not very high, equating roughly to one pixel every 15 metres in the real world. This means that VFR navigation can be simulated only to a certain degree, with some UK Visual Reporting Points for instance not clearly visible.

If you want to fly with Air Traffic Control and other aircraft you will be flying with the actual, current weather. If that is too challenging, you can opt to fly in the offline “solo” mode, where you can set a number of parameters like wind, turbulence and visibility. There is not an option however to set a cloudbase, so to simulate IFR approaches you will need a workaround by playing with the visibility. For instance, if you want to get visual at 300ft agl, set the visibility at about 1nm and you will ‘break out’ roughly at the desired height.

For a trial, I decided to fly the C172 out of Shoreham. The cockpit layout is very accurate, and you can also find a brand new glass cockpit version of the aircraft (look for the Embry Riddle livery), besides the more classic analogue version. I configure the aeroplane for my flight very light, so on takeoff I rotate at 55kt and climb out at 75kt, getting a rate of climb of almost 1,000fpm in ISA conditions. The feeling of the aircraft is quite realistic, and there is a fairly strong, somewhat gusty wind that requires a few corrections here and there.

Stalls and slow flight, both clean and with flaps down, seem quite realistic, with the controls becoming progressively less responsive as speed decays and the aircraft quite good-natured in its behaviour. One thing to notice, however, is that there seems to be little or no propeller torque or slipstream effect. The application or reduction of power does not seem to cause imbalance in the aircraft. Obviously, that makes the flying smoother, and it may be an intended design feature of the sim so as to avoid an excessive use of ‘thumb rudder’, but it is to be considered if you are after a sim that reproduces perfectly the physics of flying.

Before heading back to Shoreham, I practice a few steep turns, which again show quite a high degree of realism in terms of the relationship between power, speed and angle of bank, and I need to maintain a certain degree of concentration to fly accurately. I then set myself up for an instrument approach into Shoreham. The cockpit is animated (meaning that the instruments give actual indications), but it is not interactive. That is, in order to set up an NDB-DME approach you need to use the drop-down menu and you do not manipulate directly the cockpit instruments, a minor nuisance but one to keep in mind if cockpit familiarisation is very important to you.

In doing the instrument approach I come to appreciate how realistic is the glass cockpit of the C172. It looks very much like the Garmin cockpit that you would find in a modern GA aircraft. For instance, when setting up your Navaids, you can slave the two bearing pointers at your disposal to two different beacons, greatly increasing your spatial awareness. After a hold, the approach into Shoreham turns out quite uneventful, although somewhat difficult on short final given the need to use my ‘thumb rudder’ to balance the crosswind.

One thing that Infinite Flight is missing, and that would normally conclude my trial flights, is the possibility to set up an abnormal scenario. While other sims give you the possibility to fail a variety of systems, here the only thing you can do is kill your engine and simulate an engine failure, but nothing else. In fact, I find the lack of ‘abnormals’ the main shortcoming of Infinite Flight. If you want to set up complex emergencies to see how you would deal with them in the real world, this sim is not for you.

The other limitation, common to other smartphone simulators, is the inevitable lack of pedals. Using your thumb to control the rudder every now and then is ok, but I would avoid intense use of the ‘thumb rudder’ for fear of creating a rather strange habit (for instance, I would not practice repeatedly crosswind landings, or sideslips).

Overall, though, Infinite Flight is a pleasant and fun simulator, especially for the variety of aircraft at your disposal. You can break the sound barrier with the Tomcat and then go on a rather surprising ballistic climb, or you can try to fly an airshow with Spitfire, or yet again you can fly a steep approach into a Swiss airport. The possibility of adventure and experimentation, with so many aeroplanes and a global scenery, is vast. And if training is what you are after, this sim can still serve you well. The possibility to fly with other aircraft around you, being guided by Air Traffic Control, makes the whole experience very realistic in terms of workload management. Indeed, as I discovered, flying circuits at a busy field may well help you polish off that rust that we are all accumulating. And, as we look forward to emerging from this Covid age, that may be time well spent. EF