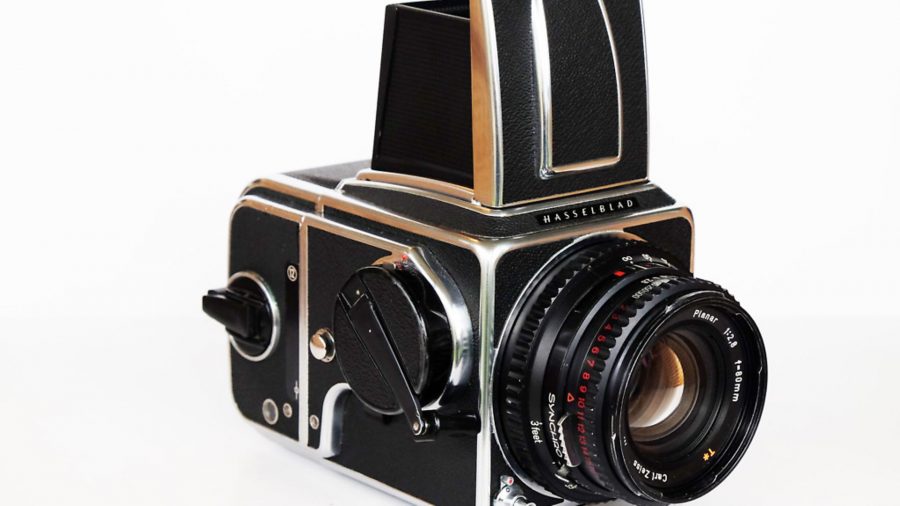 One of the things we have all been able to do during lockdown is buy stuff – and one of the hobbies one has been able to continue is collecting and using classic photographic equipment. Famous for being the camera NASA astronauts took to (and left on) the Moon, the Hasselblad has long been an object of desire, both as a still very useable photographic tool and as a collector’s piece in its own right.

Victor Hasselblad’s family were established importers of photographic equipment when in 1924 he travelled from his native Sweden to Dresden in Germany to learn about manufacture of cameras and precision optics. He also spent time in Rochester, New York where Eastman Kodak made high quality lenses.

During WWII Hasselblad was commissioned to build a copy of a hand-held aerial camera recovered from a German aircraft. Legend has it that he said he would not just make a copy but produce a better one. The evidence that he did just that is that the Swedish government procured hundreds of Hasselblad’s cameras, manufactured under his Ross company brand, for the air force and army.

A keen photographer, Victor Hasselblad recognised that the military camera was a good model for a commercial product, medium format roll film offering a bigger negative and thus better definition than the 35mm Leica, Contax and various copies of the same then becoming popular. Enlisting the help of Saab aircraft and car designer/stylist Sixten Sason, Victor came up with the first camera to carry the Hasselblad name. Later known as the 1600F, this established the familiar, modular design – a central mirror box with interchangeable film magazine, lens and viewfinder – but used a delicate and troublesome focal-plane shutter.

With development and reduction in the maximum shutter speed from 1/1,600th of a second to 1/1,000th the F-series became a reliable bit of equipment, but it was not until the redesigned but outwardly similar 500C appeared in 1957 that the definitive Hasselblad appeared. The clue is in the ‘C’ which denoted the use of the ultra-reliable and durable Compur leaf shutter built into the lenses, now supplied by Zeiss (the 1600F started life with Kodak lenses). The Compur’s top speed was only 1/500th sec, as the 500 name suggests, but it allowed flash synchronisation at all speeds and, in the rare event it failed, there would always be a working shutter in any other C lens one had to hand.

In 1962 Hasselblad’s ‘aerial’ camera became a space camera, when Mercury astronaut Wally Shirra – another keen photographer – took his own 500C, modified by NASA technicians, into orbit. The quality of the images was so much better than anything before that the agency was soon made the 500C and its motor-driven 500CL derivative its standard photographic equipment.

Back on earth, the Hasselblad quickly displaced all competitors as the tool of choice for studio, fashion and landscape photographers. Chunky and noisy – it makes a distinctive zzzzzzzzzzt, thock-tick… thock sound in operation – the ‘blad also found wide use with motor racing photographers and air-to-air specialists like Gordon Bain.

All good things come to an end, and the 500-series Hasselblad’s came in 2013, when advances in digital imaging spelled the end of film in professional use. There is, however, a coda in that Hasselblad, still based in Sweden but now owned by drone manufacturer DJI – another aviation connection – today makes a digital back that fits any of the retrospectively named V (for Victor) series cameras made since 1957. The only tiny snag is that this back, the CFV II 50C, will set you back just under £5,000. It’s Just as well one can still buy 120 film!

* The first stab at a name for Hasselblad’s new camera combined his company’s original brand name, Ross with the last two letters of the word reflex, Ross’s reflex becoming the ‘Rossex’. Oh dear.

* ‘Pressing the shutter button on a Hasselblad 500C may or may not make anything happen,’ warns Ivor Mantanle in his book Collecting and Using Classic Cameras. It is not a camera you can just point and shoot: among other things, a dark slide has to be inserted before the film back is changed and removed before the camera is fired – and you can only change the lens when the shutter is cocked.

* Hasselblads became as close to bargain-basement fare as they ever will be in the years professional users were unloading them in favour of digital kit. Sadly, the day of the £500 C or C/M is long past.

* Most people agree the best classic Hasselblad to buy, if you are actually going to use it to take pictures, is the 500C/M. The C had a fixed and rather dim focussing screen – the C/M introduced readily interchangeable screens and many have been upgraded with the bright accu-matte screen, fitted as standard to later examples.

* For all its success and mystique, the Hasselblad is really a studio camera that you can use outdoors. The rival Rolleiflex is much lighter and far quieter (modern film makers dub in some generic camera shutter sound whenever a Rollei is used onscreen – in truth, the thing makes a noise like a small dress pin being dropped very gently into a tin sitting on a nice, thick rug). Rolleis are great general-purpose medium-format cameras and survived as press cameras well into the Hasselblad invasion.

* Ironically, the cheapest way into Hasselblad photography is the motor-driven 500EL or EL/M upon which NASA’s Moon cameras were based. 500EL bodies go for as little as £250. The advantage is that they are cheap, the snag is that users – mainly professionals – bought and sold their ELs and EL/Ms as bodies, devoid of lens and film back.

* One advantage of most of today’s classic Hasselblad buyers being collectors rather than ‘users’ is that the C-series lenses and accessories are relatively cheap. The very useful and common Zeiss 150mm f4 Sonnar ‘tele’ can be had for as little as £150 and you can complete the outfit with a 50mm Distagon wide angle for a further £250 or so.

* Cosmetic condition doesn’t matter as much with a Hasselblad. These cameras were made to be used and abused by professional photographers – they just keep on working and are still readily repaired and serviced in 2021.

* By normal standards, NASA’s modifications ruined Hasselblads. Shirra’s 500C lost its waist-level viewfinder, the focussing screen was plated over and it was painted a dull black. The Moon versions were gutted of their mirror mechanisms, becoming the most expensive point-and-shoot cameras in history. Sadly, some people are making replica NASA Hasselblads today by butchering standard cameras.

* If you want to get your hands on a lunar Hasselblad, you have to go to the Moon. NASA brought back the 70mm film magazines but, in the interest of weight saving, left the cameras on the surface. However, being Hasselblads they will undoubtedly still work, fifty years on.