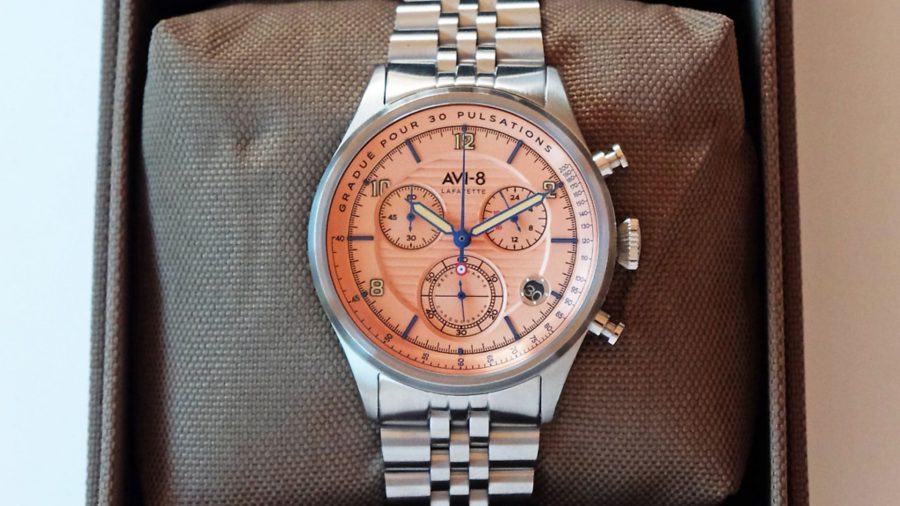 While aesthetics are a subjective matter, I think most people would agree that pilot watch specialist AVI-8’s latest model looks rather classy | Words: Philip Whiteman

Drawing on art deco and WWI inspiration – the Franco-American Squadron’s ‘Indian head’ insignia is engraved on the screw-down back – and looking especially retro with the ‘saumon’ face and blue hands of our review sample, the Lafayette is an attractive piece.

It’s also well made –the domed crystal is scratch resistant mineral glass and not acrylic, and the case is polished stainless steel.

It’s a bit like steam locomotives with watches: most people have some level of affinity to the old mechanical technology but we all know ‘electrics’ are cheaper to make, require less servicing and are more reliable in operation.

As you would expect for a watch in this price band, the Lafayette has a quartz movement whose accuracy is within a second a day (a few seconds in a month, really) which makes it ten times better than a certified mechanical chronometer.

In terms of accuracy and cost, the quartz watch is the no-brainer choice.

However, pressing switches to operate a timing function has never had the sensual appeal of clicking the stop/start and flyback buttons of a spring-driven watch – well, not until recent times: along with other emergent ‘micro brands’ AVI-8 has adopted Seiko’s VK-series meca-quartz movement, which combines the modern electrical element with the levers, wheels and heart pieces (flyback cams) of the traditional mechanical chronograph.

Thanks to this, the Lafayette and other similar models in AVI-8’s range have pushers that operate with a satisfying snap, a big second hand that moves in fifth of a second increments, rather than jerking forward one second at a time, and an instant flyback action.

On paper, you might think all this amounts to very little. In the flesh – or, rather, on the wrist – the seemingly rather subtle advantages of its meca-quartz movement actually make the Lafayette feel rather special, bearing comparison with watches twice or even ten times the price.