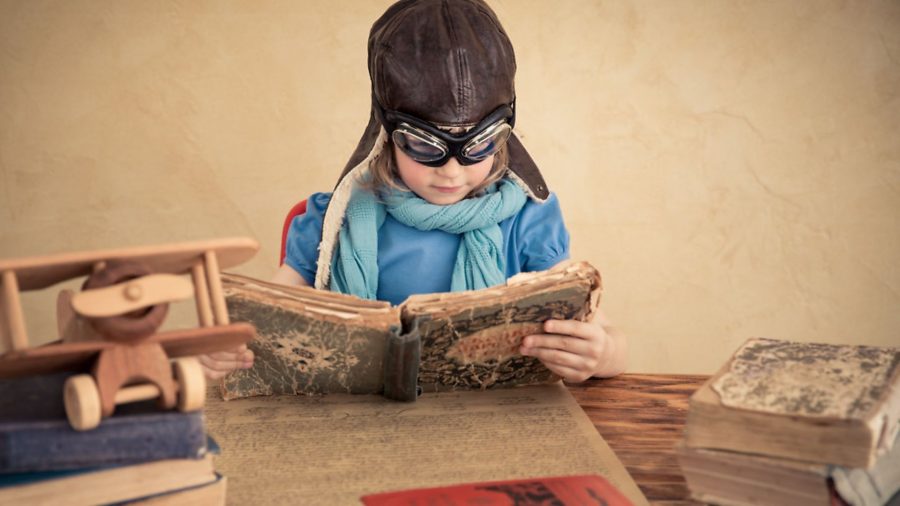 From pilot autobiographies, to historical tales of derring-do, to a delightfully silly cartoon book great for kids & adult aviation enthusiasts alike; check out these 5 flying books to beat your lockdown boredom!

Having been sent the self-published hardback original, we’ve been remiss in not mentioning before our quizmaster and Contributing Editor James Allan’s fine autobiography. While James did have a moment in the limelight when he was profiled by Nick Bloom (Pilot, October 2016) and some readers may have an idea of his flying adventures and expertise from the various articles he has written for the magazine over the years, this book provides a wealth of detail about the life of a very active man now in his 93rd year. James may have given up flying as a pilot in 2012 at the age of 83 after making his ‘last solo’ from the same Perth aerodrome he’d made his first, 65 years before (what an achievement) but his interest in aviation and many other things, including Scottish politics, whisky and walking continues undimmed. Quite how remarkably active he has been is apparent from 65 years & 2 hours, which covers James’s career in engineering and family life but it is focussed on what he concedes was an obsession with flying.

After University Air Squadron, James went on to fly Gloucester Meteors, an aircraft on which he has trenchant opinions. His first inkling of what was in store came from the taxi driver who delivered him to 205 AFS at Middleton St George in 1952. “You are not going to fly those meat-box things, are you?” the driver asked. “Those buggers are falling out of the sky all over the place here, killing pilots every other day.” As they drew up at the officers’ mess, the taxi’s headlights cast light on fresh brickwork where an out-of-control Meteor had struck the building with fatal results. At least two pilots from each of the previous courses had died in crashes and as James says, ‘looking back… it is hard to comprehend what seems to have been the utterly callous attitude that the Royal Air Force of the 1950s had to pilot deaths’.

James’s private flying may have been less hazardous and more enjoyable, if not quite so exciting as flying military aircraft (including stick time on types as diverse as the Fairey Firefly and Boeing Washington B1 – the B-29 Superfortress in RAF guise, one notes from one of the book’s interesting and useful appendices) but he packed a lot in, and used aeroplanes in earnest for business purposes. Flying everywhere from airports on the Continent, where for a long time he lived and worked, to grass strips his native Scotland, to where he returned, his flying career was one of wonderful diversity. Learning about it in full is a pleasure, both for those who know this grand old fellow of aviation and those who’ve not had the pleasure of meeting him. I commend it to you!

As a footnote, James Allan has written a number of books on flying over the years, many of them sadly now out of print. Flights of Fancy, selection of short stories originally published by long-lamented Airlife is one of these. It is now Available as a Kindle edition for £2.99 and this or any of the second-hand copies available for around a fiver would make further enjoyable Christmas reading for a pilot

The clue is in the title: Ron Lloyd came to fly the Spitfire only after a long operational career that started on the Gloucester Javelin, involved a fascinating stint flying the Convair F-102 Delta Dagger on a USAF exchange programme and by 1969 saw him instructing on the Folland Gnat. The producers of the Battle of Britain movie had acquired their ‘enemy’ aircraft from the Spanish, but it was the RAF that provided the bulk of the home contingent, in the form of gate guardian Spitfires restored to flying – or at least taxying – condition and the pilots to fly them. Among this happy number was Ron, who not only logged lots of hours flying for the director but took a large number of behind the scenes ‘stills’ that add greatly to the appeal and historical interest of Fast Jets to Spitfires.

Lloyd was the product of that vanishing thing, a grammar school education that took him – a boy from a deprived background – to Cranwell entry to the RAF. No doubt honing his literary skills in a career in airport development and telecommunications marketing that followed his early retirement from the air force at the age of 39, he writes very nicely and paints a clear picture of his wide-eyed experience of Service life in the Cold War era, not least the contrast between the social life at home and in the USA.

He also attempts something rather unusual in making this flying book accessible to the non-pilot. There are long sections that explain clearly the basics of flying and aviation systems, and a respectable glossary is included alongside the index. This rather different approach may well appeal to casual readers – I am not quite sure how many of them would be in the aviation autobiography market – but it does mean there are a few chunks of the book that flyers will inevitably skip. That said, there is so much of interest here that that Fast Jets to Spitfires really would be a welcome Christmas present for pilots and enthusiasts alike.

On the Chicken Wings website, our cartoonist Stefan Strasser puts it in a nutshell when he writes ‘Have you ever wondered if the first loop flown was actually intentional or a malfunction maybe? Or when the aircraft lavatory was invented? If you have, we just might have the book for you.’

Moments in Aviation History is a spin-off series from the, it has to be said, not uncontroversial Chicken Wings strip that appears in Pilot and several other publications in Europe and the USA. What you may not know is that artist Stefan’s brother Michael is a professional helicopter pilot based in the USA, and his experience informs the strip. For Moments, which actually presents some serious history alongside the humour, the brothers have teamed up with aviation author and historian Jim Cunningham. “We thought he might just be able to do some actual research that matches, if only loosely at least, the wild claims we were making with our aviation history comics,” says Stefan. One example: conventional history suggests Howard Hughes flew the infamous ‘Spruce Goose’ only long enough to make the point that it could fly – in the Chicken Wings alternative world, he has to put it down in a hurry when an assistant on the flight deck discovers the all wood aircraft is infested with termites.

Humour is a subjective thing, but I would venture that even those who remain unamused by Chicken Wings would find something to raise a smile in this beautifully produced and delightfully silly book. It certainly tickled my funny bone.

Subtitled ‘the amazing story of the people who made possible Richard Noble’s extreme projects…’ Take Risk is actually a sparse (in terms of personal life story) autobiography that focusses on projects and pays tribute to, in particular, the engineers who turned the products of Noble’s restless drive and energy into not just working hardware, but brilliant technology.

Not every project came off – far from it, as the book reveals. We all know of the successes – Thrust 2, Thrust SSC and the Bloodhound, now out of Richard’s hands but still showing potential to hit 1,000mph – but along the way were failures like the ARV Super 2 light aircraft, the Atlantic Sprinter – a long range powerboat and the Farnborough F1 turboprop. The latter was aimed at delivering an ‘air taxi service’ (Noble likens it to Uber) that, operating from small airfields, would beat the airlines in time taken to deliver passengers to their destinations.

A great motivator, Noble is one of those people who sees opportunities where others can only imagine problems. Pilot’s editorial team, past and present, must own up to being in the latter camp when it comes to the Super 2 and F1. It wasn’t that the ARV lacked fine flying and handling characteristics: it was just that experience showed that the combination of a new company, new airframe and new engine stacked the odds against success. The F1 had some good people behind it, but we knew the CAA was at the time (and for many years afterward) dead set against single-engine IFR ops, and enough of us had endured really rough rides in poor weather in small aircraft to question if the public would ever take to it. However, as Take Risk! Makes it clear, Richard’s enthusiasm for his aviation projects remains undimmed.

This is not to say that Noble is slow to admit mistake or quick to gloss over his shortcomings – although one wonders how many potential sponsors might have come to regard him as relentless and monotonic, rather than tireless and dedicated as his friends and admirers (including this reviewer) see him. As it ‘says on the tin’ this autobiography eschews navel gazing and is all about what can be achieved by taking those prepared to be bold – and it’s all the more of an enjoyable old-fashioned read for it.

I would like to have reported that I had read every last page of famed aerobatic ace and Russian aircraft importer Richard Goode’s great thick slab of an autobiography by the time this review appeared in Pilot, not just for the sake of form as a diligent reviewer, but because it is such a well-written and richly detailed account of a very full life that it is, as cliché has it, impossible to put down. Living the Goode Life is also almost unbelievably candid about both the author’s personal life and business dealings. Infamously, Goode crashed while performing an aerobatic display at a friend’s wedding, after his Pace Spirit started to break up in flight. It is common knowledge in the aviation community that this structural failure occurred as a result of the Spirit’s wing being damaged when the shipping container it had been transported in was dropped. What you might not know is how terribly close Richard came to death – the description of his appalling injuries will make you shudder – and quite how angry was the groom at the attention drawn to the hapless pilot, his bride being an old girlfriend of Richard’s!

There were some incredible goings-on during the time that Richard’s aircraft importing and building business (he got the Yak-18T back in production and commissioned new-build WWII Yak fighters) was at its peak. From the many ‘Notes’ stories and flight tests published in Pilot, you might have gathered that there had been certification issues with types including the Sukhois imported by Richard – what you learn from his book is that he and his Russian associates had ‘got by with a buccaneering approach to certification… Sukhoi created their own certificates of registration and airworthiness, modelled on [CAA] ones that I showed [them]’. ‘Totally in contradiction to all the rules, Sukhoi printed up the necessary certificates, which they then granted to their own aircraft!’

In the 1990s Russia went through great turmoil, and when visiting Moscow Richard and his party – which included, I note, photographer and ‘Old Timers’ editor Peter R March – were caught up in the bloody 1993 coupe that for a time displaced Boris Yeltsin. In time, new management took over at Sukhoi and prices were raised to an unsustainable level, and when the factory Richard had commissioned to build a Japanese Zero (really!) was raided by armed men, it became apparent quite how badly one’s fingers could be burned in Russia.

There is so much more to read and tell about – cars, aerobatics, display flying, girlfriends and marriage, restoring country houses and so on – that all I can say is just get on and order a copy of Living the Goode Life, one of the best aviation autobiographies published in recent times.