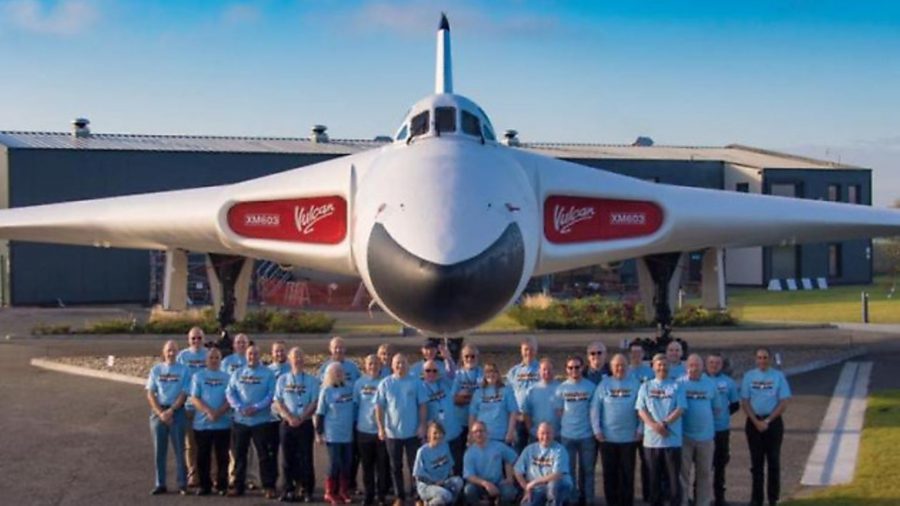 Avro Vulcan XM603 has been restored thanks to a £50,000 donation by businessman Leon Howard, who flew in the aircraft as a teenager more than 50 years ago.

The delta wing bomber, which formed part of the UK’s nuclear deterrent, sits outside Avro Heritage Museum in Poynton, Stockport, on the site of the Woodford factory where all the Vulcans were built.

After decades as a static display, XM603 now looks the same as when it rolled off the line more than half a century ago. With no engines it is unable to fly but it has been hailed as the finest example of a refurbished Vulcan in the UK, if not the world.

Vulcans were in service from 1956 to 1984 and carried nuclear weapons. XM603 last saw action in the Falklands War, when it took part in the famous Stanley Raid.

Former pilots attended the unveiling ceremony, including the first to fly XM603, Tony Blackman, and the last, Sir Charles Masefield.

Cutting the ribbon at the event was Howard, a former apprentice at Woodford who was offered the chance to fly in the Vulcan.

‘We went to 50,000ft over Anglesey, from where you could see the curvature of the earth. It was absolutely magnificent, I’ve never forgotten it,’ he said.

Dave Pierce, project leader of the restoration, was reported in the Manchester Evening News as saying: ‘Without the fantastic generosity of Leon, we would have struggled to complete the job in good time and to the standard befitting such a magnificent aircraft.’

Harrow Estates, landlord of the museum site, and HMG Paints also donated to the Vulcan’s renovation.