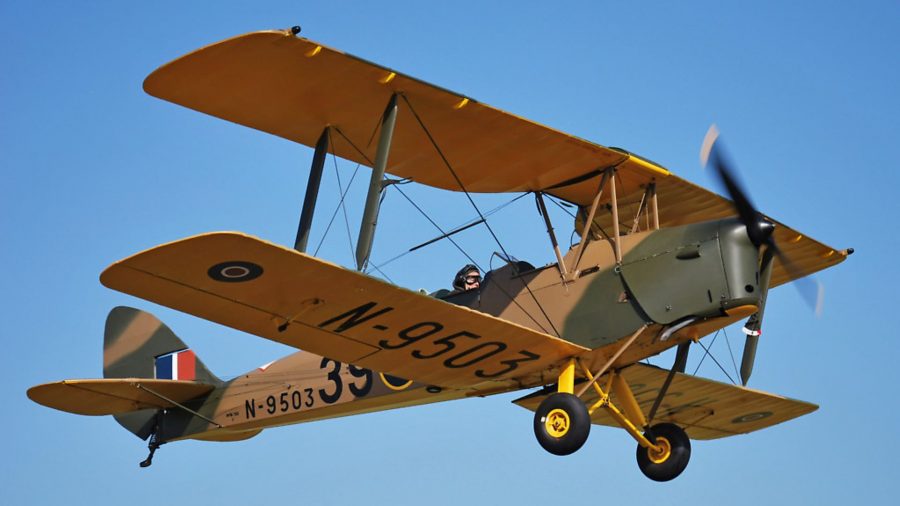 Tiger Moth G-ANFP/N9503 (photo above), Kevin’s fifth restoration, was first flown last summer but recently sold to Richard Santus. The new owner flew the vintage biplane to the Czech Republic over a period of three days.

Leaving Henstridge he routed via Lydd before crossing the Channel. On the journey, Richard encountered strong and very cold headwinds but, wrapped up in a Sidcot suit and thick German flying boots, he managed to get to his home base near Prague on 21 January.

Built in 1939, N9503 was flown by several RAF Flying Schools from December 1939 until October 1951. Registered G-ANFP two years later, the Tiger Moth had been converted for agricultural use by January 1959 but crashed a few months later.

The remains were passed around until the derelict fuselage was taken into care by the Mosquito Aircraft Museum in November 1975. Wessex Strut member Graham Horn acquired ‘FP in 1999 and started the rebuild, before Kevin Crumplin bought it fourteen years later and successfully restored it to its wartime configuration as N9503.

Kevin explained: “Having built a number of aircraft (RV-6, Sherwood Rangers and a Starduster) I became caught up in the Tiger Moth restoration and flying world which has resulted so far in the restoration of the five Tiger Moths.”

The first, G-AMIV/R5246 was completed in mid 2011 and sold to the Air Fighter Academy/Hangar 10 at Heringsdorf, Germany the following year. This was followed by G-ANEW/NM138 (fitted with anti-spin strakes); G-ADWJ/BB803; G-ALWS/N9328, now owned by Jim Norris but still based at Henstridge; and G-ANFP/N9503.

A sixth Tiger Moth, G-BWMK/T8191, which was flown by Kevin when he was learning to fly with the Navy at Plymouth in 1960, is currently in his workshop, along with a Gipsy Moth.

“After selling two, I decided to keep the other three and set up ‘Tiger Moth Training’ to ensure that the Tigers could pay for their basic costs and remain active at Henstridge,” Kevin added.