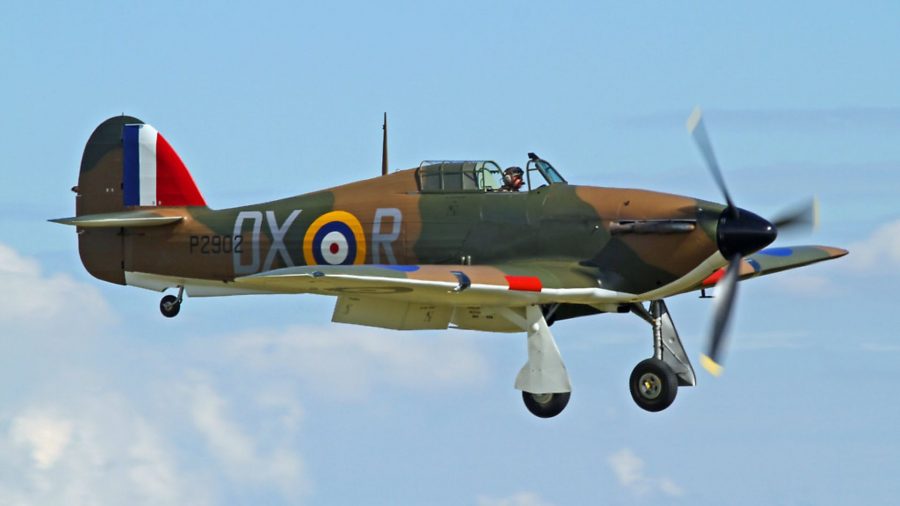 This year’s 25th annual Flying Legends Air Display organised by The Fighter Collection (TFC) on 8-9 July at IWM Duxford was indeed memorable for its outstanding flying and the overall nostalgic experience provided for the large crowd. It will also be remembered for the two remarkable incidents to P-51 Mustangs.

Amongst the 44 aircraft line-up for the flying programme were a dozen Spitfires, five Hurricanes and five Mustangs, four Curtiss Hawks, and for the first time a quartet of historic racers.

The three-hour flying display (presaged by the Red Arrows on Sunday) opened with a formation of eight Spitfires and a Seafire, led by Cliff Spink in the silver-painted Spitfire XVIII SM845. Next up was a solo display by Nick Grey in Comanche Fighters’ P-51B Mustang Berlin Express that had arrived at Duxford just a few days before after Lee Lauderback, CEO of Stallion 51, had flown it across the Atlantic from Houston, Texas.

Diving in across the airfield at over 340kt on its opening pass the P-51’s bubble ‘Malcolm’ hood inexplicably disintegrated damaging the fin and port tailplane and showering the runway with fragments. Nick Grey was uninjured and quickly landed the draughty fighter. This P-51B was restored by Pacific Fighters and is painted to represent the aircraft flown by 1Lt Bill Overstreet who famously pursued a Luftwaffe Bf 109 through the arches of the Eiffel Tower in Paris before shooting it down. John Muszala made its first post restoration flight at Idaho Falls on 27 November 2014.

The flying continued with a trio of naval fighters — TFC’s FG-1D Corsair and F8F Bearcat along with Anglia Aircraft Restorations’ (AAR) Hawker Fury ISS flown by Richard Grace. Three of TFC’s unique collection of Curtiss Hawks then took to the air. The familiar sight of B-17 Sally B initially accompanied by a P-51 ‘Little Friend’ is always popular. From Switzerland, Classic Formation’s DC-3 and two Beech 18s gave a very distinctive display with tight manoeuvres almost within the airfield boundary.

It was next the turn of the ‘Luftwaffe’ to take to the sky with artistic aerobatics by Anna Walker in the Spanish-built Jungmann and John Romain in the ‘newly weathered’ Buchón joining combat with Alan Wade in TFC’s Warhawk.

A highlight of the afternoon came with the Battle of Britain sequence in which five Hurricanes, three Spitfire IAs and ARC’s Blenheim took to the sky. Hugh Taylor’s Hurricane I P3717, Hurricane Heritage’s R4118, HAC’s P3700 and Shuttleworth’s Sea Hurricane Z7015, were joined by AAR’s Hurricane I P2902 on its public debut. P2902 had crashed near Dunkirk on 31 May 1940 and parts were recovered in 1989 before being moved to Hawker Restorations at Milden in 1994.

Following storage and a long rebuild P2902 became the world’s 15th airworthy Hurricane when it was flown by Stu Goldspink at Elmsett on 19 June 2017. Lee Proudfoot flew the Blenheim with Spitfire IAs N3200, P3708 and X4650 following. This magnificent sight will hopefully be repeated at the IWM Duxford’s Battle of Britain Air Show on 23-24 September.

While ‘The Horsemen’ — Steve Hinton, Ed Shipley and Dan Friedkin, gave their amazing close formation display on Sunday in F-6K Frenesi, P-51D Miss Helen and P-51D ‘Sharkmouth’, they were unable to fly on Saturday.

Dan Friedkin’s rare photo-reconnaissance F-6K Mustang 44-12852 had a very involved history after being sold to a private owner in 1946 up until James Beasley bought it in 2005. He decided to have it fully restored to represent the P-51D 44-13318 Frenesi that was flown by Lt Col ‘Tommy’ Hayes with the 364th Fighter Squadron at Leiston, Suffolk in the summer of 1944.

Dan Friedkin, who acquired the Mustang in 2009 for Comanche Fighters, made its first post-restoration flight at Danville, Illinois on 31 January 2017. He had it specially shipped to the UK to appear at Flying Legends.

There was a complete change of pace with the ‘new’ air racing segment of the flying programme when Shuttleworth’s DH88 Comet and Mew Gull G-AEXF, Richard Seeley’s Travel Air Type R ‘Mystery Ship’ and Pete Kynsey’s Cosmic Wind Ballerina took to the air for a mock ‘30s-style air race.

This was followed by a solo display from Dakota Norway’s DC-3. It should have been partnered by Flying Veterans’ DC-3C SE-CFP Daisy but that unfortunately had an engine problem while en route from Sweden. The final ‘odd couple’ in the display was Plane Sailing’s PBV-1 Canso G-PBYA and TFC’s FM-2 Wildcat.

The afternoon’s flying concluded with the traditional large formation Balbo with ‘The Joker’ providing the intermission. This year it was Richard Grace in the Fury (Saturday) and Nick Grey in a Spitfire (Sunday).

The second Mustang incident occurred when the Sunday Balbo flew overhead. Mark Levy in AAR’s TF-51D Miss Velma broke out of the formation as its engine failed. On base leg east of the M11 motorway Mark realised he was not going to make Duxford’s 24 runway and decided to land straight ahead in a wheat field.

At the last minute he retracted the Mustang’s undercarriage and safely pancaked into the crop. He was uninjured and the aircraft was recovered to the airfield the following day. Quite unprecedented, this was the fourth engine failure by an aircraft taking part in a UK flying display (Twister, Avro 504, Gladiator and Mustang) and it was only half way through the season.